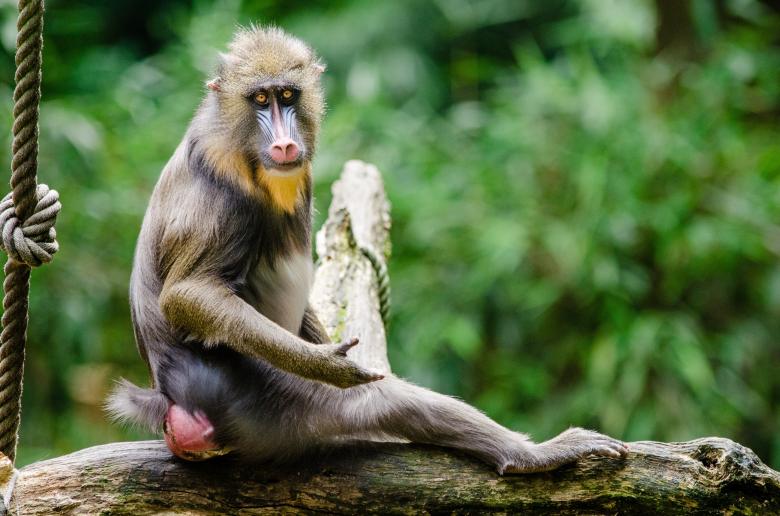 Monkeys are a large and diverse mammal group that includes most primates.

Humans, chimpanzees (Pan troglodytes), and other apes share an ancestor with monkeys but belong to a separate group of primates that diverged from monkeys millions of years ago. Monkeys are smaller than apes and have tails, which apes lack.

There are many distinct types of monkeys that live all over the world and have very different lifestyles.

Old World monkeys have nostrils that point downward and inhabit Asia and Africa.

New World monkeys are found in North and South America and have nostrils that point outward.

This beautiful, long-haired, medium-bodied primate is the world’s only grass-grazing monkey.

The Gelada is a terrestrial species that live in Ethiopia’s grasslands, where it eats almost entirely grass.

They can carefully pick blades of grass and herbs to eat and dig up tubers due to their dexterous fingers.

Geladas live in matriarchal groups, with large foraging bands of 30 to 350 animals. They are the most terrestrial primate, besides humans.

Geladas are large, stocky monkeys, with females weighing about 28 pounds (12 kg) and males about 40 pounds (19 kg).

On the back, males have a long hair cape. The hairless, hourglass-shaped pink or red region of skin on the gelada’s chest is its most remarkable feature. 10 Most Powerful Lions in History that defeated a Tiger

These yellowish-brown baboons with silver-colored fringes on their hands and feet live in eastern Africa, from southern Ethiopia to northern Mozambique.

Males are significantly larger than females, as they weigh around 50 lbs (23 kg) compared to the female average of 26 lbs (12 kg).

Yellow baboons have a social structure, with dominant males and inferior males that must compete.

The reproductive opportunities available to an individual are highly influenced by their position in the hierarchy, therefore competition is fierce!

Each troop can consist of 8 to 200 baboons and includes males and females.

while holding an infant above their heads as a way of showing they do not intend to attack or fight.

far southwestern Tibet, northern India, northern Pakistan, Bhutan, and possibly Afghanistan. It is found in forests at an elevation of 1,500 to 4,000 meters.

Its easternmost limit in India is Buxa Tiger Reserve in northern West Bengal, at least up to the Rydak river.

Gray langurs from Nepal are larger than those of other gray langur species. Males weigh an average of 39 lbs (18 kg), while females weigh 35 lbs (16 kg).

Nepal grey langurs are both arboreal and terrestrial, spending time on the ground as well as in trees. They frequently run on all fours and can even leap 15 feet!

The Tibetan macaque is a large, Old World monkey found in eastern Tibet and certain regions of China, particularly the Sichuan province.

They prefer to sleep in caves and prefer to live on the ground, however, they are highly agile and capable when up in the trees.

These macaques are rather aggressive, and conflict is common both between Tibetan macaques themselves and with members of other species.

Because of its size and aggressiveness, the Tibetan macaque is usually at the top of the primate food chain in its habitat. 10 Dangerous wild Animals that are so Unpredictable

The probosci’s monkey has a very distinctive appearance. Males have incredibly long noses that might hang down over their mouths.

According to some theories, females prefer larger noses and louder calls, hence the length of the nose is a product of sexual selection.

They are generally cream/brown in color, though their limbs are greyer and their head and shoulders have redder hair.

These monkeys are only found in Borneo in Malaysia and Indonesia.

The strong and robust Hamadryas baboons belong to Old World monkeys. They are extremely intelligent creatures.

Silver manes and pink faces identify mature males of this species. They were considered representatives of the Egyptian god of learning in Ancient Egypt.

Hence, they are otherwise known as Secret baboons. These animals are no longer found in Egypt and can now be found in Ethiopia, Somalia, Saudi Arabia, and Yemen.

Males of this species frequently get into violent fights over the females they control and will attempt to steal females from other groups. 10 Largest Fish in the World

The Olive Baboon is a large, robust creature with strong limbs. They have long, pointed muzzles and walk on all four legs, giving them a doglike appearance.

The male olive baboon can reach a remarkable weight of 82 pounds (37 kg)!

Olive baboons live in a hierarchical society in which adult males compete for supremacy all the time.

A male rises to power through aggression by toppling the current male in charge.

Once he has ascended to power, and as long as everybody fears his stares, a dominant male does not necessarily need to resort to aggression but very rarely retains his tenure for more than one year.

The area of their distribution covers the greater part of southern Africa. They live in diverse habitats from woodlands to savanna, steppes, and sub-deserts.

They spend most of their day on the ground foraging for food, but they often spend their nights high up in trees or on rock formations to sleep and possibly escape nearby predators like leopards.

Aggressive alpha males will resort to infanticide—killing baboon babies that are still dependent on their mother for milk. The Top 10 Biggest Spiders in the World

The Drill is a large baboon with a short tail and a dark grey-brown body.

Drills exhibit well-defined sexual dimorphism with males, being up to twice as large as females.

The drill monkey is the second-largest monkey in the world weighing up to 110 pounds (50 kg)!

Drills are regarded as one of Africa’s most endangered mammals with only 3,000 existing in the wild.

Mandrills are the largest and most colorful of the Old World monkeys. They are related to baboons and even more so to drills.

Their furry head crest, mane, and beard are quite impressive. But what grabs your attention is their bright coloration.

They have thick ridges along with a nose that is purple and blue, red lips and nose, and a golden beard. The mandrill can weigh up to an incredible 119 pounds (54 kg).

These beautiful and intimidating monkeys can be found in the tropical rainforests of Equatorial Guinea, southern Cameroon, Gabon, and Congo.

Mandrills live in small social units, but often join up with other small groups to form larger ones called hordes.

Lion Facts and Mating Season – Everything You need to know.

Honey Badger vs King Cobra Fights to the death