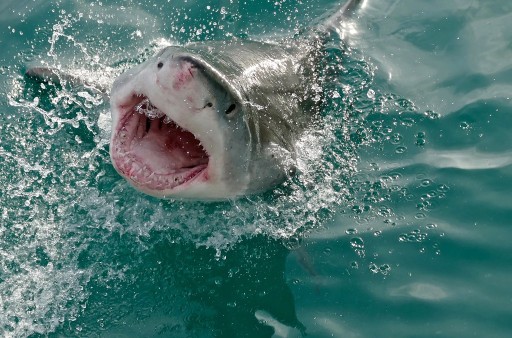 Sharks play an important role in maintaining the balance of oceanic ecosystems all over the world.

Although the vast majority of sharks coexist peacefully with humans, a number of dangerous, and deadly sharks exist that are capable of seriously injuring or harming the human population as a whole.

Sharks are a large group of fish that have lived in the oceans for over 400 million years, long before dinosaurs existed.

They are members of the superorder Selachimorpha, and modern sharks have characteristics such as a cartilaginous skeleton, five or six pairs of gills, and several rows of teeth.

Let’s find out which are the 10 most powerful and dangerous species of sharks!

The term “hammerhead shark” refers to a family of sharks known as the Sphyrnidae.

Sharks in this group, as the name suggests, have flattened and extended head that resembles the end of a hammer.

Hammerhead sharks can be found all over the world along coastlines and in warmer waters, spending the majority of their time in shallower areas.

The hammerhead shark can weigh up to 1,280 pounds (580 kg), but there have been smaller species as well.

Hammerhead sharks prey on a variety of fish, octopus, squid, crustaceans, and stingrays in their natural habitats.

The shark can “pin” its prey along the ocean floor with its head and eat once the animal tires itself out.

Cannibalism has been observed in this group as well, and it is particularly prevalent among the great hammerhead species.

The blue shark is a dangerous requiem shark of the Carcharhinidae family.

The blue shark can reach an average length of 10 feet (3 m) at maturity and weigh around 242 lbs.

It can be found in most of the world’s temperate and tropical waters.

They are easily identified by their deep blue coloration, along their back, which is sharply contrasted by a white underbelly, as their name implies.

Its long pectoral fins, slender build, and elongated body are also distinguishing features that set it apart from other sharks.

To date, experts believe that squid and octopus, as well as lobster, shrimp, and various crabs, are the shark’s primary food sources.

The Lamnidae family’s shortfin mako shark is a large mackerel shark. Endemic to the world’s temperate and tropical seas’ coasts and offshore areas.

Most shortfin makos have a metallic blue coloration that is sharply contrasted by a white ventral section. Portions of the snout and mouth become white as well.

The shortfin mako shark is surrounded by a diverse range of potential prey in its natural habitat. Cephalopods and bony fish are among them.

See also: 5 Animals That Can Defeat a Great White Shark

Oceanic whitetip sharks are voracious predators. If you find yourself in the middle of the sea, you should be concerned that they will attack you.

The oceanic whitetip can weigh up to 370 pounds as an adult (167 kg). Even though it is not as large as other species on the list, it is a fierce and powerful shark.

According to marine biologists, ocean whitetip sharks are one of the most dangerous species to humans, having fatally bitten survivors of ship or plane wrecks.

This species’ bite force has not yet been determined, but it is known to feed on squid, cephalopods, bony fish, marine mammals, other sharks, and sea birds.

The oceanic whitetip, as the name implies, has distinct white marking patterns on its pectoral, dorsal, and tail fins, making it easy to identify in the water.

They are primarily found in tropical and subtropical waters, primarily along the continental shelf regions of the world’s major oceans.

This includes sandy shorelines as well as submerged reefs up to 627 feet deep.

This extraordinary animal is easily identified by its sharp and “pointy” head, muscular body, and greyish complexion dotted with reddish-brown spots along its back, hence the name “sand tiger shark”.

The blacktip shark is a requiem shark species in the Carcharhinidae family.

The animal is endemic to most of the world’s tropical and subtropical waters and is an extremely timid species capable of seriously harming humans with ease.

The blacktip is an average-sized species, reaching a mature length of about 4.9 feet (1.5 m).

The shark is easily recognized by its stout and streamlined body, long, and pointed snout, and tiny eyes. Dorsal fins are typically quite tall, with a “sickle-like” appearance.

The blacktip shark’s coloration is generally gray or brown along its upper body regions, with white being the predominant shade along the underbelly.

Requiem sharks are actually a family of 12 genera and 50 species.

They are powerful swimmers, torpedo-shaped predators that travel alone or in groups, and have large mouths filled with sharp, serrated teeth.

What makes the sharks even scarier is that some of the requiem species, such as the gray reef shark, have distinct threat postures.

The sharks will swim laterally, exaggeratedly toss their heads, arch their backs with their pectoral fins held downward, and snap their jaws menacingly.

Requiem species vary in size, but the largest can grow to be more than 24 feet (7.3 meters) long, making them the largest bullies on the planet.

The bull shark, another powerful shark species, is known for being extremely lethal.

It is one of the top three most dangerous shark species to humans, which is bad news for coastal residents.

Bull sharks have been involved in 69 unprovoked attacks on humans, many of which ended fatally.

It lives along the Pacific and Atlantic coasts, but it has also been found in freshwater.

Furthermore, unlike most species, bull sharks prefer shallow waters, which means they frequently come into contact with humans.

The bite force of the bull shark is 1,350 PSI, making it the shark with the greatest pound-for-pound bite force.

The tiger shark is a large requiem shark species in the Carcharhinidae family.

The tiger shark gets its name from the dark stripes that adorn its body and is found in tropical and temperate waters around the world.

Aside from their distinctive stripes, the animal is easily identified by its large size, reaching up to 16.5 feet (5 m) at maturity.

The tiger shark spends the majority of its time along coastlines where the water is relatively shallow.

From here, the shark feeds on a variety of small fish and is known to eat almost anything that moves.

Jellyfish, mollusks, crustaceans, sea birds, and even sea snakes fall into this category.

The great white shark is notorious for its ferocity and aggression. It has a massive build and can pursue even the fastest swimmers in the ocean.

Great white sharks have no natural enemies other than orcas because they are apex predators.

Despite the myth that great white sharks are man-eaters, they only attack humans by accident due to a vision problem. This means they can misidentify any human as prey.

However, great white sharks are the leading species when it comes to fatal human attacks.

The great white shark, which has 300 3-inch-long teeth, has a bite force of 4,000 PSI, making it the most powerful sea animal by bite force measurement.

10 Most Unique Hybrid Animals in the world