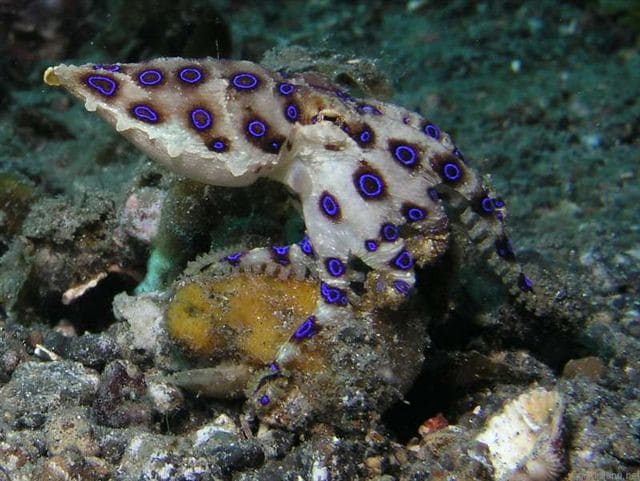 Why does everything cute, cuddling, and fluffy want to see you in extreme pain? All you wanna do is pet and cuddle a puss caterpillar but in doing so can cause severe pain.

A puss Caterpillar is a large insect covered in a fluffy coat with spins that break off in your skin causing hematoma bruising and enough pain that even morphine can’t get rid of.

They are endemic to the southern USA but can also be found in South Carolina, Texas, and  Florida. The worst part about coming in contact with a puss caterpillar is that it doesn’t feel like it’s hurting you straight away, instead, the pain builds up as the tiny spines dig their way into your skin.

Tigers are dangerous animals that you’ll definitely run away from but will running do you any good. This big cat will win against you in the water because it’s a good swimmer and it will undoubtedly win against you on land.

After all its hind legs are longer than its front ones which means it can leap 20-30 feet in just one jump. If you still think you can get away then you should know that they can sneak up on you out of nowhere, thanks to their giant padded feet. 11 Dangerous Animals you should run away from

They hunt at night and they are fiercely protective of their cubs. What might swing in your favor though is that they are only successful in capturing prey once in every 10 or 20 attempts. These odds are pretty good for the average human.

They can eat around 88 pounds of meat in one sitting and will stay with anything they kill until they’ve picked it clean. There’s also no chance you can overpower them, for they are the third largest land carnivore and weigh up to 660 pounds. If you find yourself in tiger territory, we hope you survive to tell the tale.

Cone snails are cold-blooded murderers. The cone snail is a 6inch sea creature that lives in rifts in the Indian pacific. They have brown and white shells and they feed on fish.

How on earth does a small snail manage to bring down a fish?. Cone snail is venomous and not just a little bit but a whole lot.

They are the most toxic of over 500 cone snail species and have several human deaths to answer for. They use an awful harpoon-like tooth to deliver the venom which causes paralysis. There is also no way to cure it other than to try and keep the sufferer alive until the toxin wears off but it’s not all bad news.

There is potential in the research world for the venom of a cone snail to form part of painkilling drugs.

So far it is being proven to be 10 times more powerful than Morphine. Researchers just have to figure out just how to make sure it doesn’t kill anyone in the process.

Japanese hornets are dangerous animals you don’t wanna get close to, they are twice the size of a normal hornet and twice as grumpy too.

Their venom can be fatal and they have long stingers and mandibles, that allow them to tear their prey apart literally.  They look beautiful on the outside, they have a black, yellow, orange, and brown color, yellow vents, and broad wings.

They can fly at speed of 25 miles per hour and they are incredibly aggressive. If you come across a Japanese hornet nest, the best thing to do is to be calm and walk away gently. 11 Dangerous Animals you should run away from

The worst thing you can do however is run as that will only make them chase and attack you. Up to 40 people lose their lives to giant hornets every year with most death caused by intergalactic shock. However, their venom can also cause death as it can chew through tissue and decimate red blood cells…Insects That Will Kill You One-On-One

Some might consider them cute and cuddly but they are dangerous animals you should run away from. They are not the most vicious or confrontational bears but they have a particular set of attributes that would see them win against humans.

Firstly, they are great swimmers, they are called marine animals because they spend most of their lives in the sea ice and they can win against humans in a race. They can weigh as much as 10 men 1700 pounds and stand up to 10 feet tall.

Fortunately for us, they don’t have much luck with food. They often settle for small mammals, vegetation, birds, and eggs. Still, a polar bear is badass.

The spines of Assassin Caterpillars are toxic if you touch them and their furs are quite irritating. This animal however is a dangerous animal you should run away from.

This creature is responsible for many deaths every year as they blend into the rainforest of southern Brazil, they can be hard to spot until it’s too late. 11 Dangerous Animals you should run away from

Their bristles which look like tiny spears have an anti-coagulant venom that can cause bleeding, red blood cell rupture, and vomiting with just the slightest brush against them.

The worst part is if you touch one by accident you usually end up feeling like theirs more than one on you and if that’s the case you might end up with renal failure, internal hemorrhaging, and deaths. They are also found on tree barks.

Why is it that everything in the shape of a snake wants us dead, if it’s not the snake themselves, it’s caterpillar or centipede, can’t we all just get along?

The Amazonian Centipede is an aggressive, grumpy, and unfriendly insect that is both giant and venomous. It grows up to 12 inches long and has a pair of legs on each of the 21-23 sections on its body.

That’s a lot of legs. Although they have poor eyesight, they sure know how to eat, they devour birds, snakes, bats, tarantulas, frogs, and lizards and they would slice and dice their victims until they are in bit size pieces. If that’s not bad enough, then the venom they release is potent enough. It is that toxic that can kill small animals and can affect humans too. 11 Dangerous Animals you should run away from

Anyone who has been beaten by an Amazonian giant centipede can find themselves with fatigue, chills, fever, pain, and swelling. While death is unlikely, it’s still not a very comfortable experience.

They are one of the very first predators to walk on land, let’s talk about what makes them interesting. Scorpions are very resilient animals, they’ve been around for at least 400 million years and each scorpion’s life span is around a quarter of a century.

They can live for about 1 year without food and would even survive underwater for up to 2 days. That’s pretty impressive, they also glow in the dark which can be really helpful in trying to locate them, all you need is a UV light and you can spot them out.

Now let’s talk about how dangerous they are. They are venomous, they have a needle-like point on their tail that delivers venom, how much venom it produces depends on how badly it wants to kill.

Fortunately being stung by a scorpion doesn’t mean you’ll die. Lucky for us there is an anti-venom available. There are also a few scorpion species like the Arizonian bark scorpion that can produce a fatal sting.

They look like jellyfish. They are a siphonophore. They start life as an egg, then create several organisms that group together into a mass. They can’t survive on their own so the Portuguese man o war can consist of dozens all the way up to thousands of organisms.

They live in the warmer oceans around the world like the pacific and they are known for stinging humans. Thousands of people have been stung by this creature every year and this causes elevated heart rate, red welt, vomiting, and muscle cramps. In some cases, it can even cause death.

They are the biggest living lizards on earth and they have some interesting skillsets and features that may make you wanna learn more about them. But for the sake of your safety, it’s best to learn about them in books or you-tube videos not by seeing them up close.

For many years, Komodo dragons were thought to have deadly bacteria in their spit that could bring down big animals like the water buffalo and that was a terrifying thought. However, upon closer inspection scientists found that instead of deadly bacteria, they had venom glands.

A bite from the komodo dragon could cause blood loss, paralysis, tissue damage, pain, and an inability to clout. Water buffalo or other big games don’t stand a chance when a komodo dragon is around.

Humans are not exempted from unfortunate encounters with this creature either. Aside from the fact they can consume around 80% of their body weight in one sitting, they can also devour humans.

At least four people have lost their lives in the last 50 years to a komodo dragon attack. Fortunately, they prefer to feed on dead bodies than live humans which is why Indonesian’s often cover their graves with rocks. The Komodo dragon looks harmless up close but they are downright dangerous.

They look so cute, beautiful, and colorful, they fly around the ocean so gently that you wouldn’t see them coming. The Blue-ringed octopus is one of the deadliest octopus in the world.

They carry enough poison to kill 26 people but you may not even know that you’ve been beaten. Their painless bite causes two small puncture wounds and it’s a race against time to get rid of the tetrodotoxin from your body while fighting paralysis, heart failure, nausea, respiratory distress, and blindness.

It sounds like a good time all around. Fortunately, attacks are rare, most occur when humans accidentally stand on them in the ocean, and when the octopus feels threatened. If death does occur, it’s due to the lack of oxygen. CPR can often bring the victim back to life and he can tend to make a full recovery afterward.

The blue-ringed octopus uses 2 types of venom. The first one is from the saliva which incapacitates its prey but doesn’t kill them then they go back and kill the victim with the second dose. One is a defense venom while the other is a murderous one.

How strong is a Gorilla?