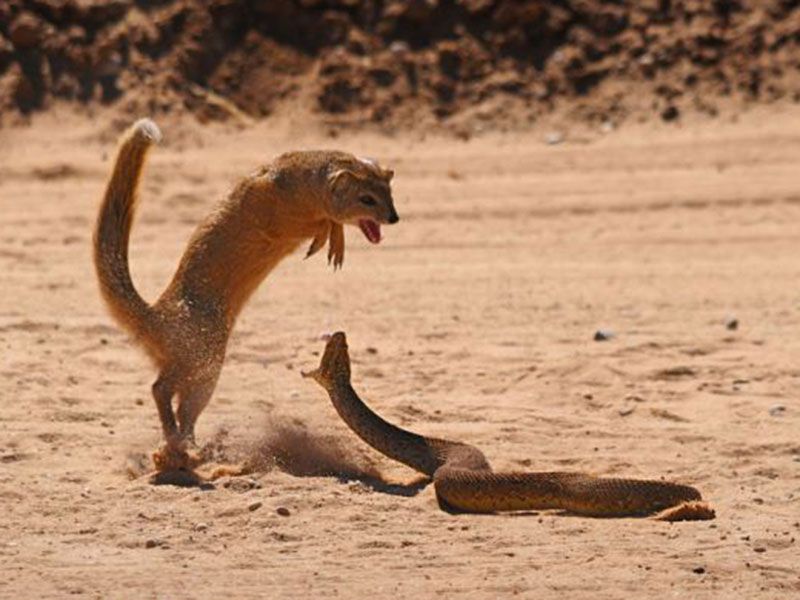 3 Animals that can conveniently kill the world’s venomous snake

Animals in the Wild have evolved and found new ways and tactics to survive. As you already know. Surviving in the Wild is all about survival of the fittest. Some Animals have evolved to become more fearless and aggressive.

Do you know that the honey badger is one of the most aggressive animals in the wild? The name honey badger is affiliated with the animal because of its insatiable hunger for honey. A badger oftentimes will go into a swarm of bees to get a taste of honey, it would obviously get stung by thousands of bees it still wouldn’t retreat…

Badgers are known to defend themselves even against Lions, hyenas, and especially venomous snakes… However, An inland Taipan or a black mamba doesn’t stand a chance against the aggressive honey badger.

Regardless of its aggressive nature, Lions, hyenas, and Leopards can kill a badger..

Related: 10 Most Fearless Animals in the wild

A snake doesn’t stand a chance against an eagle, a venomous snake is caught unawares by the eagle’s flight and speed, an eagle quickly swoops on the snake and takes it off the ground.

The snake becomes completely Immobile, powerless, and useless once it’s on the flight, the eagle then uses its sharp claws and beak to bruise the head of the snake…The snake dies even before the eagle lands.

Related:10 Animals that can conveniently kill the world’s venomous snake

The Grey mongoose is well known for its skills in killing venomous snakes, particularly cobras. Mongoose first captures the snake’s attention, the snakes begin to attack while the mongoose runs around it, eventually, the snakes get tired, immobile, and weak, and then the mongoose quickly jumps on the snake and kills it,

mongoose is not immune to snake venom but its thick coat stops the penetration, if the mongoose is lucky it takes a few hours to fully recover from the snake venom…

Bizarre types of fish in the ocean