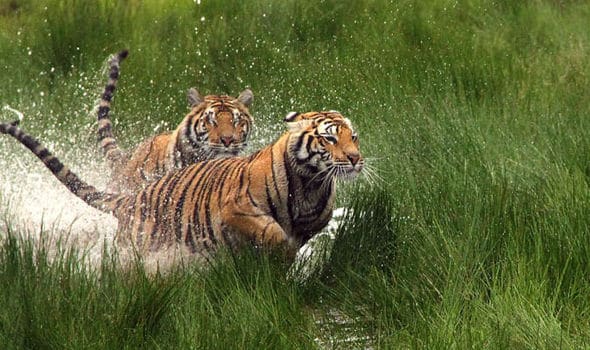 Some people have claimed that a tiger could take down an elephant, a rhinoceros, or a gaur. They frequently use the case studies of Kaziranga National Park and Dudwha Reserve to support their claims.

In those case studies, tigers preyed on endangered elephants and rhinoceroses. They were, for example, Tiger vs jaguar – who is the real king of the jungle?

This isn’t unexpected. This has previously been well-documented. Tigers are known to kill elephants and rhinoceroses that are weak and malnourished, rather than those that are in their prime.

In the case of Dudwha National Park, which involved a tiger killing a 35-year-old female rhinoceros. An Indian rhinoceros has a 40-year lifespan, therefore the rhino was already old and in bad health.

A tiger could take down an adult/aged gaurs in one-on-one combat but a tiger is sure to flee when there’s a herd of them.

Tigers are clever creatures. They know they’ll be crushed to death or stabbed by horns/tusks. That’s why they stay away from those who can fight back.

They aren’t attempting to impress anyone. All they want to do is eat. They don’t want to starve to death while attempting to eat. How to survive a tiger attack?

That’s also why safari guides frequently ride elephants into tiger-infested areas. Because tigers are terrified of elephants, they keep them at bay.

Let’s take a look at Rhinocerous, they share a habitat with tigers.

a huge, strongly built plant-eating mammal native to Africa and southern Asia with one or two horns on the nose and thick folded skin. Hunting has put all kinds of animals on the verge of extinction.

Rhinoceros have limited vision and can only move in a straight line. Momentum is both a benefit and a drawback. Tiger is incredibly quick and adaptable and can avoid the Rhino’s charge in mid-air. The Rhino is a difficult animal to kill, but the Tiger has an irrefutable advantage.

Elephants and mammoths are members of the Elephantidae family of huge herbivorous proboscidean animals.

These are enormous terrestrial mammals having a snout that serves as a trunk and teeth that serve as tusks.

The family’s majority of genera and species are extinct. There are only two genera left: Loxodonta and Elephas.

Who would win in a fight an elephant or a Tiger?

Elephants are typically victorious. The only time a tiger would fight an elephant is if the elephant was an Asian Elephant. Elephants were once ridden because it was believed that tigers would not attack a fully grown elephant.

What animal does a tiger fear?

Tigers are terrified of larger creatures, such as elephants and some bears. Crocodiles can even use their keen jaws to kill tigers. They are also terrified of dholes, which are dangerous animals, ferocious, and known to roam in packs.

Males of the species are exceptionally muscular and powerful, capable of generating enough force to kill predators, humans, and other domestic cattle that dare to upset them. They live in herds of 30-50 people and have a 280-day gestation period.

Gaurs are large and powerful creatures. Adult gaur is occasionally preyed upon by tigers, but only when they are alone, old, emaciated, and/or unwell.

Gaur, on the other hand, is believed to be quite brazen and aggressive in Southeast Asia and South India, where they are accustomed to human presence.

They have commonly observed grazing alongside domestic cattle in fields, occasionally killing them in conflicts.

The saltwater crocodile is a species of crocodile that can be found in saltwater habitats and brackish wetlands from India’s east coast to northern Australia and Micronesia. Since 1996, it has been classified as Least Concern on the IUCN Red List.

How aggressive is a saltwater crocodile?

When it comes to prey, saltwater crocodiles are cunning. They don’t actively chase their prey, instead, they prefer to ambush them with their incredible speed. “The saltwater crocodile has a notoriety for being among the most aggressive species on the planet as an adult,” says lead researcher Matthew Brien.

A saltwater crocodile can kill a tiger and vis-a-vis

Tigers are particularly vulnerable to saltwater crocodiles.  The biggest tiger that has ever existed on land or in water will be killed by a 20-foot saltwater crocodile; crocodiles this size or larger are simply too strong and powerful to be taken down by a tiger.

In the water, a crocodile surprise attack will kill a tiger, especially the big and massive saltwater crocs. On the land, a crocodile’s chances for survival are almost impossible, and a tiger’s strength, speed, and ferocity make it easy to kill a crocodile.

5 Animals that could kill a King Cobra