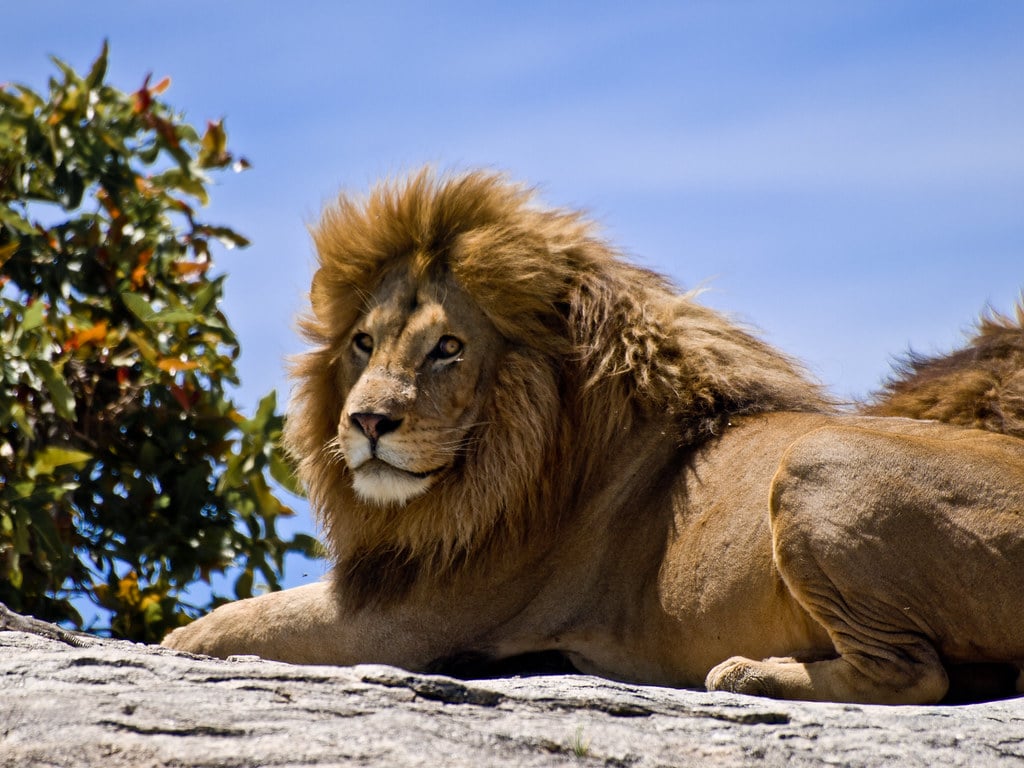 The lion is a big cat belonging to the genus Panthera and they are commonly found in Africa and India.

They have a muscular physique, a deep chest, and a mane unique only to lions. are sexually dimorphic, with male adult lions being larger and having a larger mane than females.

Males weigh 190kg on average, while females weigh 126kg. They need this weight to hunt big animals, so they can remain strong and healthy.

The older male lions get, the more spectacular their manes become. These manes can reach a length of 16cm and it’s a symbol of power.

Their manes become darker as they grow older and may help shield their neck and head from injury during battles, in addition to attracting female lions as well.

Though lions are known as the “kings of the jungle” due to their dominance over other predators, However, other animal species can sometimes bully or kill the jungle king in one-on-one combat.

Hippos are larger, thicker, and more aggressive than lions, and they spend some of their time in the water, whereas lions spend all of their time on land.

The hippo has the advantage while in water but while on land a group of pride would take down a hippo. Nonetheless, In a one on one fight, The hippo would win due to its massive mouth, jaws, and thick skin

Giraffes have a powerful kick that will damage crucial bones in a lion’s body.

and giving a very hard hit or strike on the lion’s body which can injure bones and organs.

The leg of a giraffe is strong, long, and powerful, capable of delivering a deadly kick that could potentially paralyze and fatally injure a lion.

A crocodile can kill a lion when the lion comes close to its habitat, water bodies. Its strong teeth can crush a lion.

If the crocodile manages to bite the lion, then the crocodile wins the battle before it even begins. If it turns out to be an adult saltwater crocodile, the lion stands no chance, It is said to have a bite force of 3,700 PSI.

It has one of the strongest bites in the animal kingdom, and it likes to drag and twist its prey until it drowns.

They are the strongest creature on land. An adult elephant can singlehandedly defeat a lion, including a Pride of lion is no match for a healthy adult elephant.

To bring down a baby elephant, would take a whole pride of lion, and even then, there’s a slim possibility of success.

Elephants can take down logs or trees if they feel threatened.

Bears are a little bit slow but their large size and coat give them an advantage and hence make them dangerous and deadly.

One grizzly bear will fight off a pack of wolves over a carcass.

The reason why that fur and fat help protect them against the strong jaws of the wolves.

A polar bear will most likely not be frightened to confront a lion because it is much larger and has no competition for food with a lion.

The 6 strongest animal bite force in the World