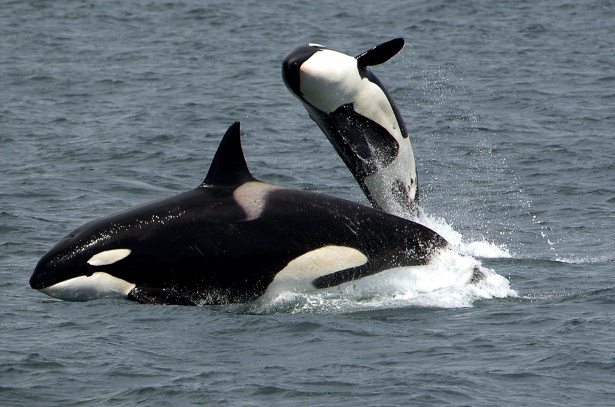 Orcas are kings of the ocean and undoubtedly the apex predators at the top of the food chain.

No animal hunts orcas, except for humans.

However, there are a few animals that could kill or at least scare a killer whale!

Orcas, often known as killer whales, have no fear of anything and can eat anything in their surroundings, including fish and whales.

They are highly clever and sociable, living in pods similar to wolf packs.

But what happens when these whales swim alone?

A bull sperm whale in his prime is too big, too unpredictable, and too mean for one killer whale.

A female sperm whale is estimated to be around half the size of the male, and based on reported encounters, taking a female out requires a great deal of work from an orca pod.

This is why when the killer whales want to attack a sperm whale, they will do it on the pods.

A long-line trawler captured an incident in which an orca pod was systematically catching fish trapped on the trawler’s long lines.

When a male sperm whale seemed to charge the orca pod repeatedly in an attempt to scare them away, the orca pod fled.

The film crew thought that the sperm whale was attempting to get the same fish.

Against the bull sperm whale, the orcas used a tail outward and tail slapping protective position similar to that used by female sperm whales against attacking orcas.

When sperm whales are attacked, they frequently form a rosette, which looks like a wagon wheel with their heads pointing in and tails pointing out.

They flail the water with their huge tails in an attempt to warn off the assailants when they are in this arrangement.

The killer whale must be very careful around agitated sperm whales because a slap from that tail could be life-threatening.

There was probably a time when white sharks were able to kill healthy orcas, perhaps orcas became more clever and adaptable

Orcas outclass white sharks in both size and intelligence and mostly travel in groups.

A great white can beat an orca but it is usually a smaller chance.

I think the chances would increase significantly if the killer whale were alone and if it had a similar size, equal to that of the great white.

A sickly orca has undoubtedly been killed by a great white. Large ocean species such as whales and orcas are normally only eaten by great whites if they are unwell or already dead.

But that’s about it. A Great White has large jaws and serrated teeth that tear and are more effective than orca teeth, but that’s it.

Orcas are way heavier, faster, and smarter, but that doesn’t mean the great white has no chance!

At such a mouth, think what would happen if the orca made a mistake and fell prey to the shark’s mouth.

I do think a Great White could very possibly kill an orca, especially if she is alone.

The largest animal known to man is said to be the Blue whale.

These magnificent marine mammals rule the oceans at up to 100 feet long (30m) and upwards of 200 tons.

Their tongues alone can weigh as much as an elephant. The blue whale protects itself by moving its fluke all over.

The blue whale can defeat an orca if it is hungry enough, but, it would be impossible to take on a pod of orcas.

Because of its size, the blue whale has few predators.

When it comes to adults, there is at least one recorded instance of a pod of Orcas attacking a medium-sized adult.

They failed in that case but they went about it as if they knew what they were doing and had done it before, and had a reasonable expectation of success.

Blue whales are massively large creatures and it would take more than one orca to overpower them.

Even then scientists were still skeptical and observations were made mostly on indirect evidence of orcas killing larger whales: and only later that year witnessed a true kill of a juvenile whale, not even an adult.

And the whale was young and was already weakened by sickness. An adult blue whale might be impossible to overpower, the massive size and strength are beyond orcas.

So certainly, due to their size, a blue whale could defeat a killer whale, in fact, it could even hurt it with its fluke.

Humpback whales are very interesting animals and protect almost any animal getting attacked by orcas. Exactly why they do this isn’t known.

Some speculate that it is personal to the whales, or that it is the noise that orcas make while hunting.

Those whales that fight back have scars from orca bites later in life, according to research.

So perhaps the whales recall what the orcas did to them and don’t want it to happen to someone else.

Humpback whales are familiar with the assault of orcas and would do everything within their power to protect animals from harm.

Anyway, the humpbacks have been aggressively chasing off any orcas they see feeding or hunting.

Being much larger than killer whales, even in a 1 on 1 confrontation, humpback whales are very aggressive with a killer whale.

So even if he can’t kill an orca, he will definitely be able to chase it away, trumpeting loudly to scare them off.

Killer whales do not dive deep; instead, they prefer shallow, sunny areas, which are home to the majority of marine life.

Whereas, Giant squids are creatures of the deep (abyss), rarely rising to the depths where orcas live.

There are accounts of giant squid coming to the surface, and this leads to some terrifying encounters by sailors.

And it’s possible the killer whale came across one when it came to the surface. As orcas are naturally curious and intelligent animals, they might well have approached the squid.

Perhaps, the squid was defending itself from orcas that’s why it came to the surface.

But there are no accounts of such an encounter, and giant squids don’t generally surface like that if they’re healthy.

So it’s possible, but I don’t believe it’s very likely that squid and orca have ever fought in the way that sperm whales and squid have.

But think of a 45 feet (14 meters) squid clinging to a killer whale with its beak. I think at some point, the orca will give up.

And that is the end of 5 Animals that can kill a killer whale.