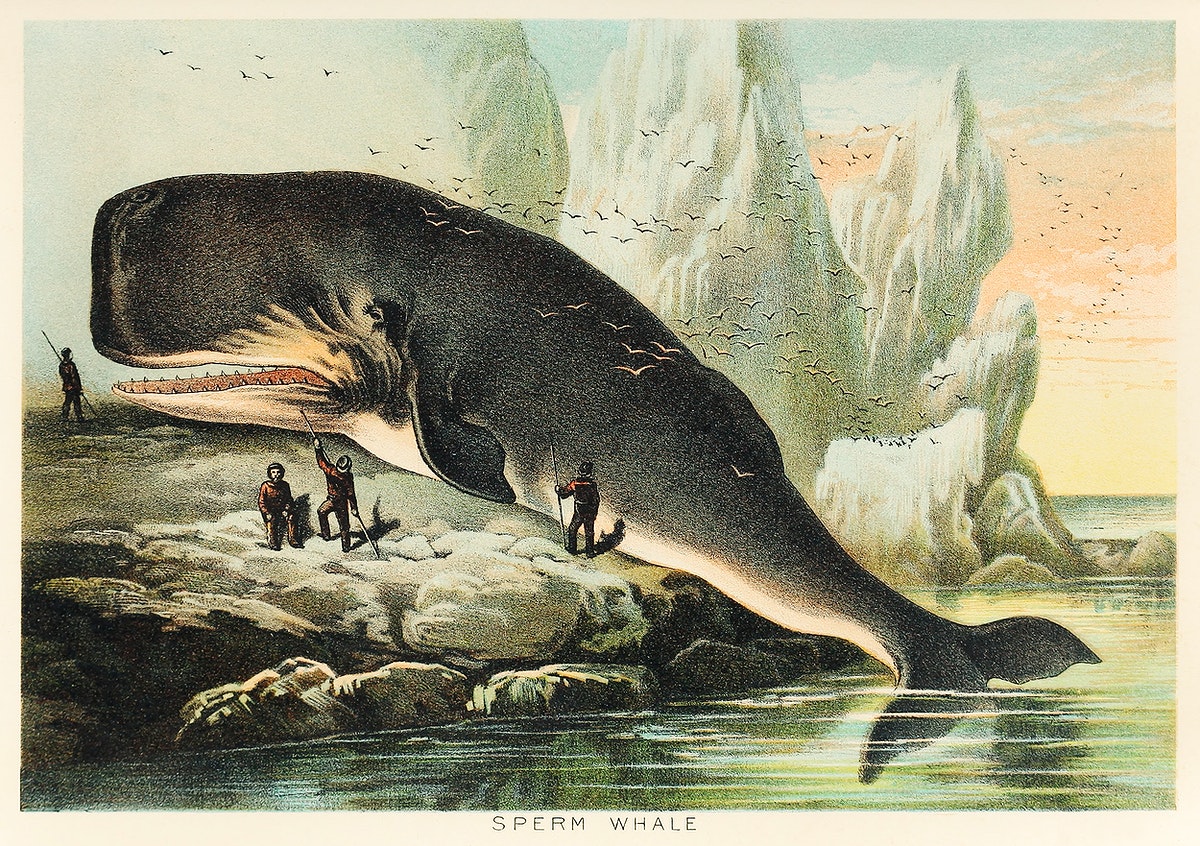 Sperm whales are the largest of the toothed whales, with one of the most widespread global distributions of any marine mammal.

They can be found from the equator to the edge of the Arctic and Antarctic ice.

They get their name from the waxy substance found in their heads, called spermaceti. The spermaceti contains oil sacs helping whales direct and focus sounds

From 1800 to 1987, sperm whales were a primary target of the commercial whaling industry, which nearly wiped out all sperm whale populations.

Despite the fact that whaling is no longer a serious threat, sperm whale populations are rising.

The majority of sperm whales are dark grey, however, some have white patches on their bellies.

They are the only extant cetacean with an asymmetrically situated solitary blowhole on the left side of the crown of the head.

With an incredibly large head that accounts for almost one-third of its either body length. On each side of the lower jaw, there are between 20 and 26 big teeth.

It is clear that a single killer whale will have no chance against a house. But like a wolf against a bear, when he has the pack on his side, there is a chance.

If winning means being able to kill your opponent, then a pod of orcas will emerge victoriously. They won’t always do, but they’ll keep trying until they succeed.

Orcas are the second smartest dolphin, and they would win with numbers and strategy. Blue whales have been attacked by orcas before, and they were successful.

They can easily outsmart the sperm whales and target their weak spots. Sperm whales are incredibly big but not fast. 5 Animals that can defeat a killer whale

And we’re just talking about one sperm whale, not a pod. In Sri Lanka, in 2013, a pod of orcas attacked a group of sperm whales

The orcas were vicious, even though they didn’t win. A group of 35 orcas fought 9 sperm whales in California, killing one and injuring others.

Orcas are more likely to attack anything. They are brave. When fighting sharks, orcas, for example, know that they must go for the gills and flip the shark over.

Although sperm whales aren’t as small as sharks and lack blubber, orcas could prey on weaker regions such as the eyes or exhaust the sperm whales before feasting on them. Orcas are the most powerful predators on the planet.

The largest prey is sperm whales. It’s not all about the size.

The biting force of a Sperm Whale is unknown, however, it is likely to be weaker than that of a Killer Whale, or approximately 19,000 PSI.

Megalodon, on the other hand, has a much stronger bite force, estimated to be around 40,000 PSI. The megalodons were also faster than the sperm whales in sprints.

This is pretty tough, considering Megalodon fought Livyatan a lot, and the Livyatan is an even larger evolved sperm whale,

I definitely think a megalodon could beat a sperm whale! Of course, as I said in the video megalodon vs sperm whale

if the whale is bigger, chances are the wheel will turn.

Based on a specimen of Mosasaurs Hoffmann, the longest mosasaurs were estimated to be 56 feet (approximately 17 meters) long.

Despite the fact that the Sperm Whale is larger, Mosasaurs Hoffmann was far more aggressive, therefore I see Mosasaurs initiating the fight.

Anyway, the fight seems pretty even, even though Sperm Whale was way heavier. Mosasaurs were warm-blooded creatures.

It would be a fascinating fight if Mosasaurs could avoid the Sperm Whale bull and possibly bite the tail, it would be over for the whale since it wouldn’t be able to swim.

Well, the mosasaurs have much stronger jaws despite being lighter. Although its jaws are narrow, it can still disable the sperm whale by biting its tail or flippers.

It is not a good idea to flee. And it’s very hard for me to believe that he could do that because the mosasaur was very mobile and flexible. Mosasaurs also have belly ribs.

These truly protect organs such as the lungs, heart, and others.

These animals were made to kill, and I think they could have easily finished a sperm whale, maybe even bigger than it.

Compared to sperm whales, Leviathan is more remarkable. They are predatory whales that consume other whales and other sea creatures.

Leviathan was considerably more amazing than a Sperm whale, even if they were the same size. Leviathan is an animal designed more to kill other large animals.

His teeth are significantly larger and thicker than sperm whale teeth, allowing him to inflict more serious wounds.

Remember that sperm whales only have bottom teeth and that their bite is much weaker than Livyatan’s.

Leviathan could certainly do what sperm whales do, such as ramming, but this animal was designed differently from the sperm whale.

Leviathan was also way faster than a sperm whale. So it can dodge to the side from the sperm whale’s ram, bite off its fins like the Megalodon, and immobilize it.

So, in such a fight, you know who would win.

Deinosuchus was a huge crocodyliform that existed from 82 million years ago to the end of the Cretaceous period.

Sharks, marine reptiles like mosasaurs, theropods, tyrannosaurs, and various Deinosuchus may have been among its main competitors as large predators. Sea turtles and dinosaurs were their main prey.

So imagine the biggest crocodile that ever existed! Probably the fight with a Sperm whale would have been quite difficult,

and the victory of the crocodile would have happened only if the whale was smaller, about the same size.

But due to its armored skin and superior weaponry, such as its mouth full of teeth, and also using the surprise attack,

he could have bitten the whale’s flippers, winning in the end.

Jaguar vs Anaconda fights to the death

Electric Eel – The Toughest Animal in the Amazon