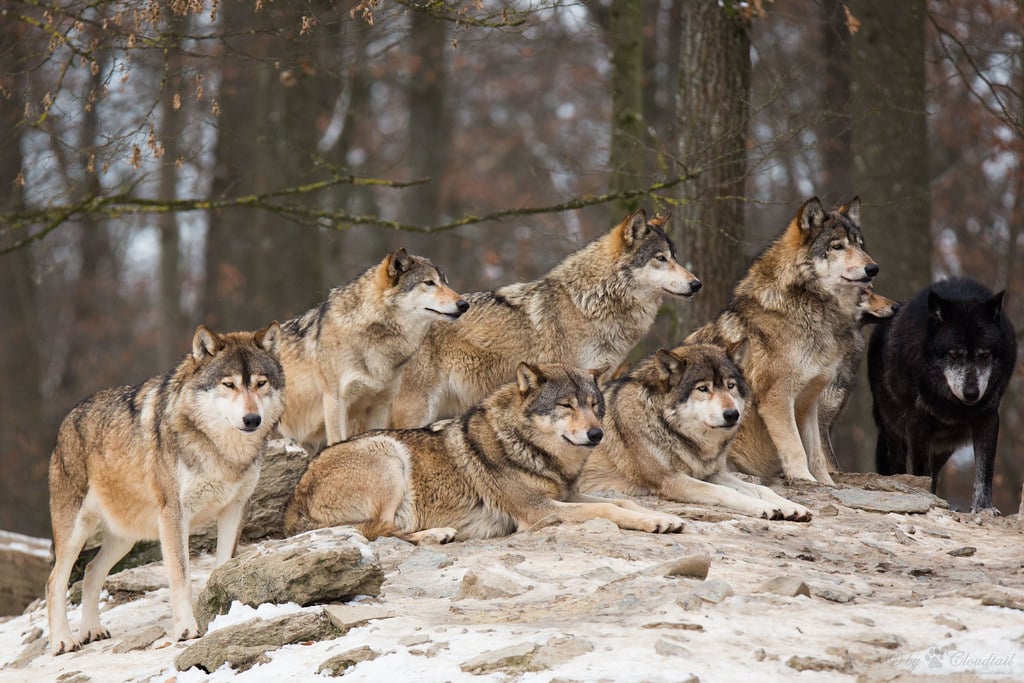 Wolves are very social animals. They live and hunt in groups known as packs. A wolf pack is simply a different name for a wolf family.

A wolf pack consists of an adult male and female wolf, as well as their pups of various ages. The number of wolves in a pack can range from three to twenty.

A wolf pack has a definite social structure and rules of conduct. The alpha male and female are the pack leaders.

These two wolves have the upper hand over the rest of the pack’s wolves.

The alpha male and female wolves are the only ones in the pack that can breed and have pups, and they also get to eat first at kills.

Keep in mind, however, that these fights will depend a lot on the number of wolves in the pack.

If the pack has more than 8 – 10 members, it’s hard for me to believe that it can be defeated.

Brown bears and wolves frequently fight over a kill.

Most of the time, the wolves have killed an animal, and the larger, more powerful bear invites itself to the feast while the wolves leave.

The wolves have the advantages of numbers, teamwork, and agility. A large male bear, on the other hand, can weigh up to 800 pounds (362 kg).

Females are around two-thirds the size of full-grown males, and if they don’t have cubs, they can also commandeer the wolves’ kill.

They can, however, inflict multiple rib and spine fractures on a wolf with a single swipe of a highly muscled front paw armed with sharp, up to six-inch claws. \

The bite force of a brown bear is significantly stronger than that of any other North American mammal. A wolf snared by those jaws would be crunched to death.

The largest pack would soon realize that such a conflict is not worth it, and retreat.

The true name of this species is the American bison, however, most people refer to them as buffalo. They can stand up to six feet (1.8 meters) tall.

Not being predators, bison find it difficult to kill wolves, however at such a size, it will be quite difficult for wolves to kill the bison.

It all depends on the number of members of the pack. If the pack doesn’t have more than 4 – 5 members, it’s hard for me to believe they can kill the bison.

It is known that a pack of 8 wolves struggled for 12 hours to kill a bison. So, even if he doesn’t kill them, the bison will eventually win just by not falling prey.

Compared to bears, tigers will find it harder to fight a pack of wolves.

You can say that tigers have a stronger bite force but the truth is that the bite force of the two is already so tremendous that it wouldn’t make a difference.

The tiger has an advantage in its paws, however, they don’t use paws defensively unlike a bear

who is not only bigger in size than tigers but also has better experience against wolves packs.

A tiger can easily fend off 3 – 4 wolves, but it gets complicated when the pack has more members.

In any case, unless the male tiger is weak or old, it’s more likely to run away by climbing than to stand and fight against a pack of wolves.

Tigers vastly outweigh wolves, and their physiology allows them to turn their front paws up, meaning they can hit and swipe laterally, like a boxer, which wolves can’t.

Wolves do have claws, but they’re not the hooked, tearing claws that tigers have.

Tigers have all the advantages: in size, weight, reach, and weapons, and would win unless they were extremely outnumbered.

A large healthy male Lion would definitely win, against a pack of 3 – 4 wolves. A huge female would probably win as well, but I think her death might come from her wounds.

Males and females are both capable of fighting and hunting, but they specialize in different things.

Combined with the size and viciousness of a male, it would be game over. We’re talking about over a 500 lbs beast (226 kg).

Lions are called the “king of the jungle” even though they don’t live in the jungles.

But lions like tigers are big cats. Evolutionary marvels of design and basically perfect apex-killing machines. A wolf or wolves are basically a dog. In a pack.

They have a bite and numbers. A cat has speed, agility, a stronger bite, and unbelievable reflexes. It depends of course on the number.

In the wild sometimes groups of hyenas kill a male lion. Sometimes the lion is victorious. Wolves aren’t even as large as hyenas.

If until now we only talked about animals that can defeat a pack of wolves on their own, the last place is reserved for hyenas.

Hyenas have more bite force and a tougher build than wolves. Both species are top predators with excellent intelligence and a teamwork mentality.

Wolf packs have a maximum of 15 – 20 individuals in most cases. Clans of hyenas can contain up to 80 members. How to Survive a Hyena Attack

Although wolves are more agile, hyenas are designed for power and can compete with larger predators, like lions or leopards.

Also, hyenas are likely more willing to take risks in order to achieve their goal and are also more aggressive in general. That is why I will give this fight to the hyenas.

10 Most Powerful Lions in History that defeated a Tiger

Leopard Seal vs Sea Lion – Which is more powerful