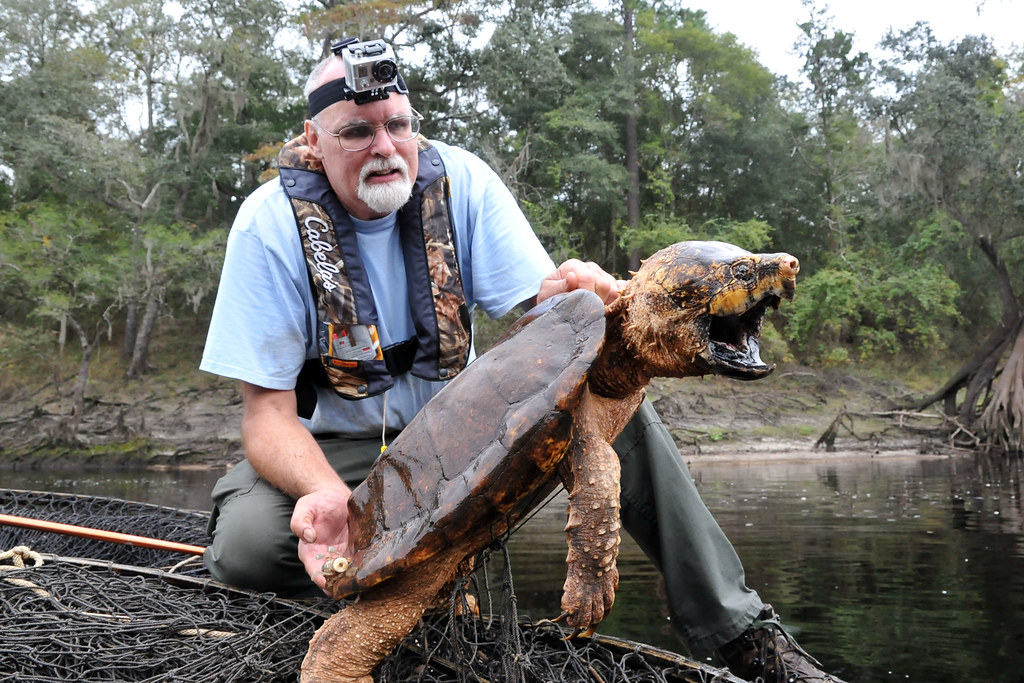 They look similar in many ways, but there are several important differences between them.

The alligator snapping turtle is the world’s largest freshwater turtle.

Their carapace, or shell, is spiky, and their massive heads, robust jaws, and hooked beaks give them a prehistoric appearance.

Chelydra is a Greek word that means “tortoise” and serpentina is derived from the Latin word serpentis, which means “snake”. This word refers to its long tail.

A huge shell covers the back of an alligator snapping turtle. Three jagged scales are visible, with a pair of scales on either side.

This shell is dark brown in color. The top of the shell is frequently coated in algae, which helps in camouflage on streams and rivers.

They have a huge head that is tipped by a powerful jaw with a hooked beak.

They have their eyeballs on the sides of their heads. The legs are short and have webbed feet at the end.

It is said that a 400 lbs (180 kg) alligator snapping turtle was caught in Kansas in 1937, but there isn’t sufficient evidence to confirm the claim.

The hard shell of the common snapping turtle is brown, olive, or black in color.

The common snapping turtle, unlike other turtles can’t pull their heads into their bodies, is too large to do it.

The nose of a common snapping turtle is at the tip of the head, allowing them to just lift a small section of their head out of the water to breathe.

They have a long, mobile neck and a strong beak-like jaw. Their shell is almost as long as their tail.

The alligator snapping turtle lives in the midwestern to southeastern United States’ rivers, lakes, and canals.

It can be found in watersheds that drain into the Gulf of Mexico.

The turtle can be found all the way north to South Dakota, all the way west to Texas, and far east to Florida and Georgia.

Alligator snapping turtles spend nearly all of their time in the water. Females leave the water to lay eggs on land.

They can be found east of the Rocky Mountains and as far south as Florida and Texas in the United States.

Japan, the Netherlands, the United Kingdom, and China all have introduced populations.

They’ve also been introduced to Arizona, California, Nevada, and Oregon, where they did not previously occur.

They can be found in a variety of water bodies, including lakes, rivers, marshes, and streams.

With the expansion of humans, they can now be found in man-made reservoirs. They favor shallow, slower-moving environments.

They will eat aquatic plants as well. Although turtles prefer to hunt at night, they can use their unusual tongues to lure small prey during the day.

The turtle’s tongue looks like a pink wriggling worm.

This turtle will lay on the riverbed’s bottom and open his jaws to reveal what appears to be a tasty bright red wriggling worm, tempting prey by fiendishly twitching this appendage back and forth to attract an unsuspecting victim.

They are opportunistic feeders that eat whatever is easiest to find and catch, and they feed less during the winter months when their metabolisms slow.

Their powerful jaws allow them to shred leaves and other plant materials from their base or the ground, as well as quickly grab, crush, and swallow animals.

Older turtles will feed on animals that use an ambush technique,

which entails remaining completely still while waiting for prey to pass by before lunging forward and clamping their jaws to trap prey in an instant.

The alligator snapping turtle spends almost all of its time in the water. Just females leave the water, and this is usually only for the purpose of egg-laying.

They can stay submerged for up to 50 minutes without surfacing for breath.

They are most active at night when they slowly migrate along the riverbed. They rarely swim, preferring to walk for most of their movement.

When they need warmth, they will leave the water and bask in the sun.

They can help regulate their temperature by traveling between deep and shallow areas of their environment during the seasons.

Unlike other turtles that bask on land, these turtles prefer to bask at the water’s surface. They will burrow into dirt or leaf litter during the winter.

First of all, as you may have noticed, the alligator snapping turtle can grow much larger than its cousin.

How to identify Alligator and common snapping turtle

The simplest way to identify the two species is to look for the Alligator Snapper’s huge head with a hooked beak and three distinct keeled ridges on the shell.

Common Snappers have flatter shells and smaller heads, making them appear less “monstrous.” They can meet in the state of Illinois, but that is unlikely.

Both turtles species are ambush predators. They sit at the bottom of the pond and blend in with the mud and plants.

When potential prey animals swim close, they snap them up.

Still, though, an alligator snapping turtle’s bite shouldn’t be underestimated. Their bite is strong enough to break through bone.

So, in my opinion, due to the size, the prehistoric look-like alligator snapping turtle will win this fight!

What do you think about this fight? I am waiting for your opinion in the comments!

How Jaguars would Survive in Africa: Skills That Help Them Thrive