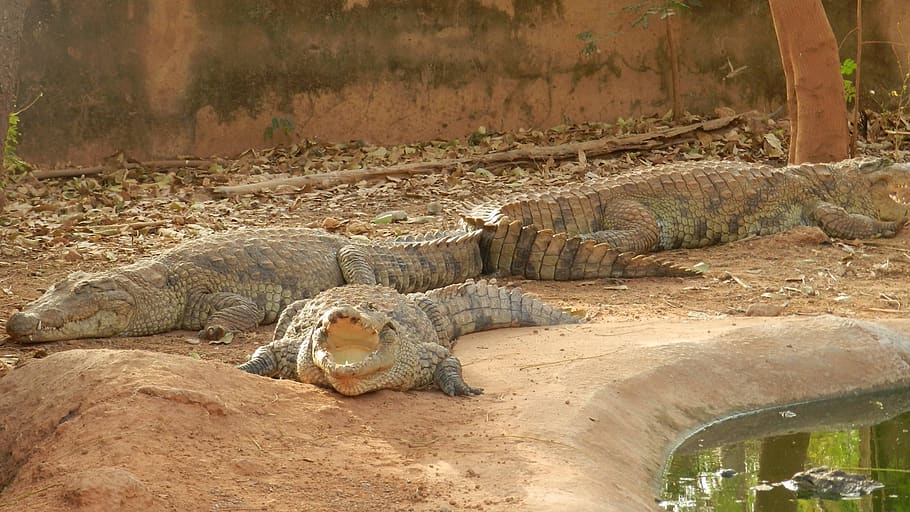 The closest animals we have to dinosaurs are crocodiles and alligators. They date from more than 70 million years ago.

These creatures haven’t changed much in look or behavior since then. In terms of size, temperament, and appearance, alligators and crocodiles are very similar.

It can be tough to tell them apart at times. An alligator, or “gator,” is a huge reptile belonging to the scientific genus Alligator.

The Chinese and American alligators are the only extant species in the genus. Crocodiles, gharials, and caimans are all members of the Crocodilia taxonomic order.

Crocodiles are massive creatures that live in parts of Africa, Asia, Australia, America. They have also been observed swimming far offshore. Crocodiles are ancient species that are thought to have changed little since the dinosaur era.

Alligators have a powerful, flat tail and an “armored” body. Their back skin is protected with osteoderms or scutes, which are bony plates buried in the skin.

They have four short legs, with five toes on the front legs and just four on the back legs.

Alligators have a long, rounded snout that has upward-facing nostrils at the end; this allows breathing to occur while the rest of the body is underwater.

When an alligator’s mouth is closed, the huge fourth tooth in the lower jaw fits into a socket in the upper jaw and is hidden. Crocodiles do not have this problem.

Males of exceptional size can weigh approximately half a ton, or 1,000 pounds (454 kilograms). Crocodiles are successful predators as a result of their physical traits.

They have a sleek structure that enables them to swim faster.

Crocodiles are fast and can take down prey with an incredible speed within short distances, even when they are not in the water.

Crocodiles have powerful jaws capable of biting with 3,000 pounds per square inch of pressure and keen teeth for shredding flesh.

A crocodile’s mouth, on the other hand, cannot be opened if it is held closed. Sharp and powerful claws are found on all large crocodiles.

The size of crocodiles varies greatly, from the little Dwarf Crocodile to the massive Saltwater Crocodile.

The Saltwater Crocodile is undoubtedly the largest species of crocodile in the world, and the world’s largest reptile.

The American alligator can be found in eastern Texas, North Carolina, Florida, Oklahoma, well common around southern states of America. Occasionally, we see them in rivers, ponds, lakes, and swamps.

Speaking of Chinese alligators, you can find them in eastern China, in small habitats in the Yangtze River basin near the Pacific Ocean.

In the past, they were found in rivers, swamps, lakes, and even ponds, but due to human encroachment, they have been confined to ponds and ditches on agricultural farms.

This human encroachment has affected their habitat and farmers have converted it to rice paddies.

You can find various species of crocodiles on every continent except Antarctica.

They are also found along the Equator just across their ranges. You can also find them in southern North America, northern South America, and also in Central America.

There are 3 species in various regions of Africa, and the remaining seven species reside throughout southern Asia.

Each species is unique to its own range and distribution and there’s an occurrence of population overlapping. Some live in large cities, while others live in small towns.

It is important to note that all species are semi-aquatic.

They reside in water most of the time, but they sometimes haul out to enjoy the sun. Some live primarily in saltwater, some live mostly in fresh water, and others utilize brackish habitats.

Alligators are carnivores. Their jaws are powerful enough to crack a turtle shell.

Fish, snails, and other invertebrates, as well as birds, frogs, and mammals that come close to the water’s edge, are eaten. They catch and grip prey with their powerful fangs.

Small prey is swallowed whole by them. They shatter the prey into smaller, more manageable pieces if the prey is huge.

They will bite it if it is particularly huge, then spin on their long axis to break off readily digestible bits.

Crocodiles ambush their prey, they wait for land animals to approach the water’s edge before charging in with incredible speed.

They can go for extended periods without food since they are cold-blooded predators, and they rarely need to actively hunt.

Crocodiles may seem sluggish but make no mistake, they are top predators in their habitat and several species of crocs have been seen attacking and killing sharks.

They eat fish, reptiles, mammals, and sometimes feed on crabs.

Alligators are social animals who frequently cluster in groups known as congregations. These groups are frequently seen soaking up the sun or going for a swim.

Alligators are creatures that regulate their body temperature externally. They are ectothermic, or cold-blooded, like other reptiles.

This means they are unable to regulate their internal temperature.

During cold weather, American alligators spend a lot of time in the water, and this helps to retain warmth for them. So it means.

Alligators also hunt their prey in water. They may appear clumsy on land, but they can swim incredibly fast in the water thanks to their tails.

A lot of reptiles live and hunt alone but crocodiles live in groups. However, these groups of animals do not form cohesive bonds or social structures outside of their size.

They gather around each other at basking areas and lie under the sun. They sometimes compete for large kills like the meat of a buffalo.

Now let’s see the fight, so what would happen if a crocodile would fight an alligator? Who would win?

To most people, alligators and crocodiles look similar. They usually don’t share the same habitat, but there are a few locations where they do pass each other.

Alligators and Crocodiles are strong and dangerous creatures. But, Crocodiles are bigger, especially the Nile crocodiles, and more aggressive than alligators.

These creatures are both different but similar, they can use their long snouts to capture prey which helps to rip meats apart.

In a fight between these two creatures, the crocodile would most likely win.

Of course, the success of this fight could be determined by various factors such as habitat and age of the animals involved.

Aggressiveness plays an important role in combat and I think we would have to give that to the crocodile, the Australian “salties” and the Nile river crocs in Africa,

who are the kings of the order Crocodilia! In areas where they live together, American crocodiles more than hold their own against Alligators, usually forcing the other away.

Great White Shark vs Saltwater Crocodile – which is stronger?