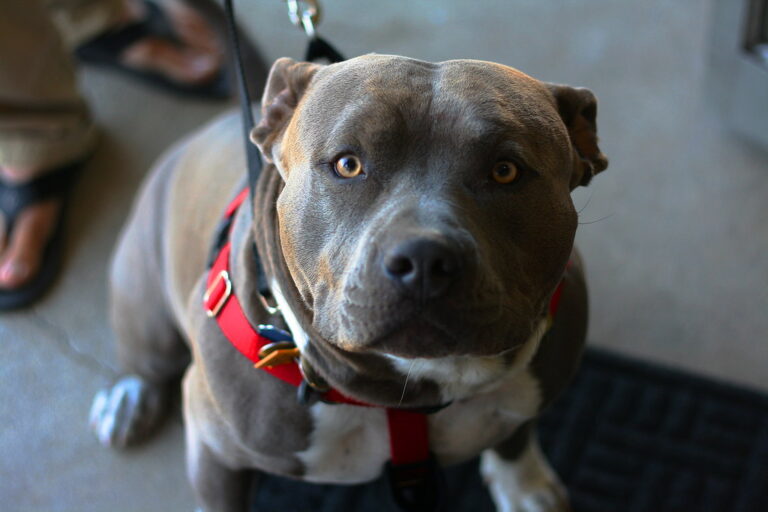 Many dog owners often disregard dog breed’s history, however, knowing why certain dog breed was developed is important to help us understand them better thus allowing us to know beforehand what is expected of them and what these dogs expect from us

The American pit bull terrier’s ancestors were developed in the 1800s by crossing English bulldogs with other terriers the result is a fighting dog that was used in blood sports when the violent sport was banned in England.

These fighting dogs were brought to America or were bred with other dogs resulting in the development of the American pit bull terrier or pit bull for short.

After dog fighting was banned in America people soon noticed the soft and affectionate side of pit bulls.

Although there are still misconceptions about these dogs, pitbull owners know how sweet and loving these dogs can be.

American bullies were recognized as a separate breed by the united kennel club Ukc in 2013.

Despite their muscular and tough bodies, American bullies are bred to be companions which means that they are loyal and very friendly towards their families.

Both dogs are similar when it comes to temperament, with proper training and early socialization pit bulls and

American bullies are family-oriented dogs who thrive in the presence of their humans.

The American Bully hates being left alone for long periods of time, both dogs will become bored, sad and that can lead to depression and separation anxiety.

A common misconception about these breeds is that they’re aggressive, however, it’s the total opposite in reality

In fact, American bullies and pit bulls are both very fond of kids hence their nickname nanny dogs.

Since both dogs are very good at understanding human emotions, they also make great choices for therapy dogs.

If trained for security purposes both dogs will do a great job although they are capable of protecting themselves and their family they are not the ones to initiate the fight, sadly you may experience seeing people walking further away from you whenever you take your bully breed out for a walk.

Overall both dogs love to be included in all family activities, they will happily play with you and your kids outside and then cuddle with you after a long day outside.

Although both dogs will get along with kids, it’s always a good idea to supervise any interaction between a dog and a child.

While both dogs look intimidating, there are actually distinct differences between the two when it comes to their appearance.

In general, pit bulls are average-sized dogs that measure around 17 to 21 inches tall with weights ranging from 30 to 65 pounds

Pit bulls are wider than tall and this is not a proportionately built breed, however, they are muscular and athletic in appearance which adds to their intimidating look.

On the other hand, American bullies come into four recognized sizes including the pocket standard classic and Xtra-large (XL).

The American bully’s height and weight will depend on the size you choose but in general, they weigh anywhere from 25 to 120 pounds with sizes ranging from 13 to 23 inches.

Compared to pit bulls, American bullies are shorter, wider, and more muscular, you may also notice that they always have wrinkles on their forehead except when they’re focusing on something.

Both dogs are low maintenance when it comes to grooming, they have double-coated short smooth, and straight coats that come in many accepted colors except moral and albinism.

Both dogs are average shedders and would only need weekly brushing to keep their coats shiny and clean.

Brushing your bully breed once a week will allow for evenly distribution of skin oils removal of dirt and loose hair and most importantly it’s a great way to bond with your dog.

Bathing should be done once every two to three months or as needed, especially when they rolled into something stinky and muddy.

Both the American bully and the pitbull will need about an hour of exercise per day to stay happy and healthy, while they may look stocky and healthy, these dogs are no couch potatoes.

In comparison to which is more active, it would be the pitbull.

Pit bulls are agile and athletic dogs who need constant mental stimulation to keep themselves from becoming bored, on the other hand, the American bullies will prefer resting in between exercise sessions.

Since Pitbulls are smarter than American bullies you will need to provide them with more puzzle toys to keep their brains working even while playing.

Whenever you take them out for a walk, it is best to keep both dogs on a leash since unfortunately, they have a feared reputation among the public.

When it comes to training pit bulls are intelligent and eager to please dogs, which is why they are easier to train compared to American bullies who tend to be stubborn, for this reason, pit bulls are also suited for novice owners provided that they’ll do a little research so they know what to expect from this breed.

Meanwhile, American bullies will need an experienced owner who knows how to be firm and consistent with the training

Both dogs will lead to early socialization, in order for them to grow into well-rounded dogs and expose them to various sites sounds, people, and animals while they are still young.

Since pit bulls have a history of being fighting dogs, they do have the tendency to display fear and aggression when not trained and socialized

But as mentioned earlier both dogs when properly trained will give you affection, loyalty, and respect

Both dogs are considered healthy breeds on average, pit bulls have a long life span of 12 to 16 years while American bullies are a bit shorter at 9 to 13 years although it’s still pretty long compared to other dog breeds

Like all dogs, American bullies and Pitbulls are prone to certain health conditions that you may need to watch out for, both dogs are predisposed to hip dysplasia, skin conditions, obesity, thyroid disease, knee complications, heart disease, and cataracts.

Both dogs are good with family and are ideal for home settings since they easily developed great relationships with their owner and families.

Compared to American bullies, pit bulls are more loyal and protective they are quick to jump into action when they sense danger around them and their families. On the other hand, American bullies are devoted to social dogs who love to please their owners.

They’re also alert and vigilant, although they can be stubborn at times. This breed would do anything to keep their families happy.

In the end, both dogs have soft hearts, despite their reputation as terrifying dogs.

People, only need to give these dogs a chance, so, they’ll realize how loving and affectionate both American bullies and pit bulls can be.

Whatever your choice is, you’ll have a good nature dog, provided that they are properly trained.

The Stigma Associated with the Pitbull dog breed