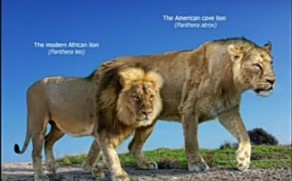 They were officially classified as a separate species of Pantherinae, Panthera atrox, which means “cruel” or “fearsome panther” in Latin. Tiger Trout

It was around 25% larger than a modern lion, making it one of the largest felids ever discovered.

It was part of the abundant Pleistocene megafauna, which included a diverse range of very huge mammals. The La Brea Tar Pits have produced the most plentiful remnants.

They were one of the largest cats ever known, even slightly larger than the primitive cave lion P. Leo fossilis from the early Middle Pleistocene.

The American Lion were a sister lineage to the cave lion, according to mitochondrial DNA sequence data from its remains.

Recent research comparing the American Lion’s jaw and skull to those of other Pantherines concluded that it was not a lion, but rather a separate species.

Another study classified them with the P. leo and P. tiger, and attributed P.onca’s physical similarities to convergent evolution rather than phylogenetic affinity.

The American lion is officially classified as a separate species of Pantherinae, Panthera atrox, which means “cruel” or “fearsome panther” in Latin.

However, it was smaller than its contemporary prey, the enormous short-faced bears, which were North America’s largest carnivorans at the era.

The physical anatomy of the American lion has been determined from around 80-100 individuals discovered from the La Brea Tar Pits near Los Angeles.

They had features that were strikingly similar to present lions, although they were much larger, similar to P. spelaea and the Pleistocene Natodomeri lion of eastern Africa.

The animal was reddish in hue, according to preserved skin remains discovered in caves in Argentine Patagonia alongside bone components assumed to be from an American lion.

Similar cave paintings accurately represent the jaguars as yellow in hue, which seems to validate this and decrease the likelihood of mistakes with fossil jaguars from El Ceibo in Argentina’s Santa Cruz province.

The American lion was found in frigid climates in various parts of its range. They most likely sought shelter from the elements in caves or cracks.

Like the Siberian tiger, another huge cat that lives in the north, they may have lined their dens with grass or leaves.

There are fewer American lions in the La brea tar pits than other predators like sabor-toothed cats (smilodon Fatalis) and dire wolves (Aenocyon dirus), implying that they were smart enough to escape the danger.

Evidence of American Lions predating on bison is fully adequate, as a mummified cadaver called “Blue baby” was unearthed in Alaska with lion bite and claw marks.

Human predation may have contributed to the extinction of the lion, according to bones discovered in the rubbish piles of paleolithic American Indians.

During the Quaternary extinction event, the American lion, along with the majority of Pleistocene megafauna, became extinct.

Illustration of an American Lions attacking a Bison. The presence of mane in male American lions is still not verified.

The most recent fossil, discovered in Edmonton, dates from 11,355 years ago, or 55 years ago.