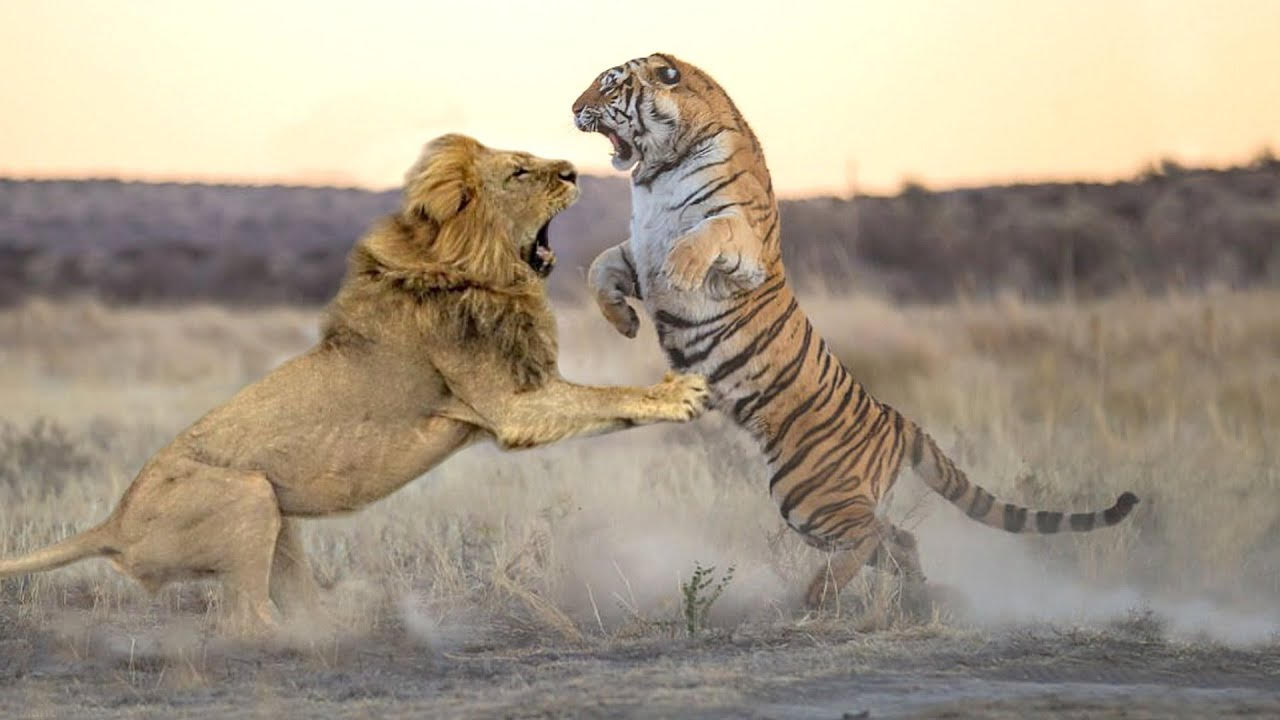 Asiatic Lion vs Bengal Tiger – Who would win a fight?

This is probably the most legendary battle in the animal kingdom.

The Asiatic lion is a subspecies of lions that can be found only in Gujarat, India.

There are currently less than 500 Asiatic lions living in the wild. The Asiatic Lion once roamed throughout Arabia, Asia Minor, Persia, and India.

One of the world’s great top-of-the-food-chain predators, the Bengal tiger is perhaps the most iconic of all big cats.

Known as Royal Bengal tigers and Indian tigers, Panthera tigris Tigris is one of the world’s most fascinating animals. Barbary Lion vs Siberian Tiger

A longitudinal fold of skin running over the lion’s belly is the most remarkable morphological feature,

which is always seen in Asiatic lions and only rarely seen in African lions.

The fur has a variety of colors, ranging from reddish tawny with black speckles to sandy or buff-grey, with a silvery shine in certain lights.

Males have only moderate mane growth at the top of the head so that their ears are always visible. 9 Rarest Animals With Superpowers

The Bengal tiger is easily recognizable due to its orange body and stripes that range in color from brown to black. Every tiger has a unique striped pattern.

They have white fur on their undersides, as well as on their cheeks and around their eyes. In the environments where they live, their coat color provides camouflage.

A long tail at the end of the body assists balance when catching food or climbing. They have long whiskers on either side of their mouths, which help them to feel items.

Bengal tigers have muscular forelegs and huge feet with long claws which help in catching and holding prey. Males are significantly larger than females.

In fact, these animals’ only habitats are the Wildlife Sanctuary in Western Gujarat and the dry deciduous forest of Gir National Park.

Bengal Tigers are mostly found in subtropical and temperate upland forests in India.

They are found in Bangladesh’s Sundarbans mangrove region, where they are known to swim between islands.

Bengal Tigers are the only tigers who have been observed to survive in a mangrove habitat!

They prefer prime lowland forests in Nepal, and they live in the subtropical Himalayan foothills and north temperate forests in Bhutan.

What do they eat?

They belong to the category of the only wild cat, found in India, that hunts in pride. They are predators and can be defined as carnivores.

The lions prefer meat above everything else, and the stats prove that they prefer fresh meat or flesh.

Adult male lions are often the first to take their part in the lions’ eating behavior. They also hunt tiny animals sometimes.

Bengal tigers are known to hunt smaller animals such as hares, monkeys, and peacocks, as well as carrion.

In rare cases, Bengal tigers have been reported to prey on young Asian elephants and rhino calves.

Bengal tigers kill their victims by overpowering them and severing the spinal cord (preferred method for smaller prey),

or by suffocating them with a throat bite (method for larger prey).

The Bengal tiger can consume up to about 30 kilograms (66 pounds) of meat at a time and then can survive up to three weeks without food.

How do they behave in the wild?

The Asian lion is a sociable and communicative animal. These lions form pride, which are tiny social groups.

The largest unit of Asian lionesses, ever recorded, consisted of just 5 females.

Male lions, on the other hand, are not as sociable as females, and only join the pride for mating and large kill.

Although hunting takes cooperation, adult males don’t tend to take part in it.

Lions hunt at night in regions with little vegetation, whereas they can hunt during the day in areas with thick forests.

These lions are comparably passive for most of the day: they can rest and sleep 20 hours per day.

Bengal tigers are usually solitary, however, they do occasionally travel in groups of 3 or 4.

Some male Bengal tigers occupy 200 square miles of territory and they protect it very fiercely.

Bengal tigers are powerful animals that can drag their killed prey up to 1,500 feet and hide it in bushes or long grass until it is ready to eat.

The Bengal tiger is a nocturnal animal, it sleeps throughout the day and hunts at night.

Bengal tigers can climb trees effectively despite their size, but they are not as agile as the smaller leopard, which hides its kills in the trees from other predators.

Bengal tigers are strong swimmers who frequently ambush prey that is drinking or swimming or chase prey that has withdrawn into the water.

Now, in an epic battle between The Royal Bengal Tiger and the Asiatic Lion, who would win?

Both the animals are majestic and dangerous predators who want domination.

Bengal tigers can be found in a variety of Indian tiger sanctuaries, whereas Asiatic Lions can only be found in Gir National Park.

So even though they live in the same country, they can’t meet in the wild!

An adult male Bengal tiger’s bite force is around 1,050 pounds-force. An adult male Asian lion, on the other hand, can bite with 900 – 940 pounds of power.

According to experts, the Bengal tiger is significantly more agile than the Asian lion.

In terms of their aggression, Bengal tigers are typically more aggressive, violent, and cruel than Asian lions. Cannibalism is a well-known behavior of Bengal tigers.

Asian lions are normally peaceful, and they never attack humans for no reason. There must have been fights between Asiatic lions and Bengal tigers in the past.

In the 1800s, Asiatic lions and Bengal Tigers inhabited the Kuno and Madhav National Parks in India.

This led to many battles between these two animals, and some were won by lions, but in the end, the Tigers managed to win the war, quickly leading to the extinction of Asiatic lions in this region. The Tigers ruled the region for 100 years after that.

In this area, their population increased fast. There were around 600–800 tigers in this area, indicating how good the habitat was for them.

In my opinion, due to their size, strength, and agility, Bengal Tiger will win this fight. I don’t think it will be an easy fight, the lion being a strong opponent.

However, I believe that the balance would be in favor of the Bengal Tiger by 65%.

How Strong are Scorpions?

10 Dangerous wild Animals that are so Unpredictable