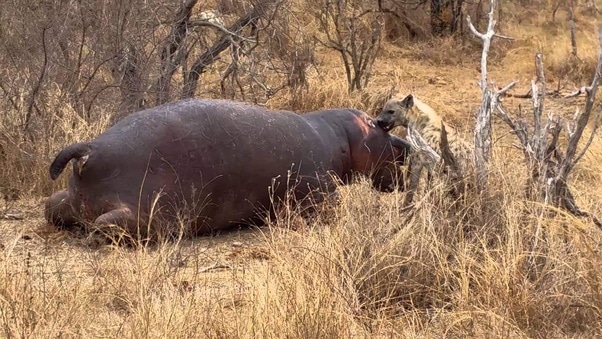 Hyenas operate in groups called clans, they are stronger together and can very well take down animals such as lions and wild beasts. But the question before us is.!

can an hyena tear open the skin of an hippo?.

The answer is yes. Hyenas have a strong bite force capable of breaking bones. They have a bite Force of 1,100 PSI, stronger than lions and tigers. How to survive a hyena attack

That bite force is capable of tearing open the skin of a hippopotamus. A Hyena can only accomplish this task on a dead Hippo, an healthy living hippo would fight back and kill the hyena with ease.

Hippopotamuses are the most temperamental and aggressive animals on earth. A hippo gets angry very quickly and without reason. Animals that can kill Hyenas in the wild

They are very territorial as well, do not come near a hippos’ habitat or try to pet her. She has big canine teeth and massive jaws, she’ll emasculate any living thing within her radius, It’s best to let her be in the comfort of her home, (submerged in water basking in the fun of it).

Hyenas’ won’t even dream of attacking something so big and massive as a hippo, Lions can attack a hippo and kill it. 6 Animals that can defeat a hippopotamus

But, not hyenas. Lions have the strength to suppress and overpower a hippo, but unluckily for lions, they only have a bite force of 650 PSI.

Even with the poor bite force, they have killed hippos before. Can a Hyena tear open the skin of a hippopotamus?

What animal can kill an Hippopotamus?

An Elephant will win every time because It’s much larger, stronger, and has powerful tusks that could impale the hippo. 6

The bite of the hippo has little to no effect on an elephant’s skin, The hippo may try to be aggressive as usual but the elephant will kick or impale the hippo, trampling it underfoot.

There’s one animal I know for a fact can kill a Hippopotamus and that is the great big massive Elephant. Yes

Elephants are known as intelligent animals because of their long-term memory. An elephant’s strength can very well pull down Trees and destroy big cars. You’ve heard of the saying…”When two elephant fights the land suffers”.

A Hippo would flee upon seeing an elephant, Fortunately, Animals know when to back down from a fight.

Below is footage of an Elephants crossing in between hippo territory and the hippos couldn’t do anything but clear paths for the elephant to pass through.