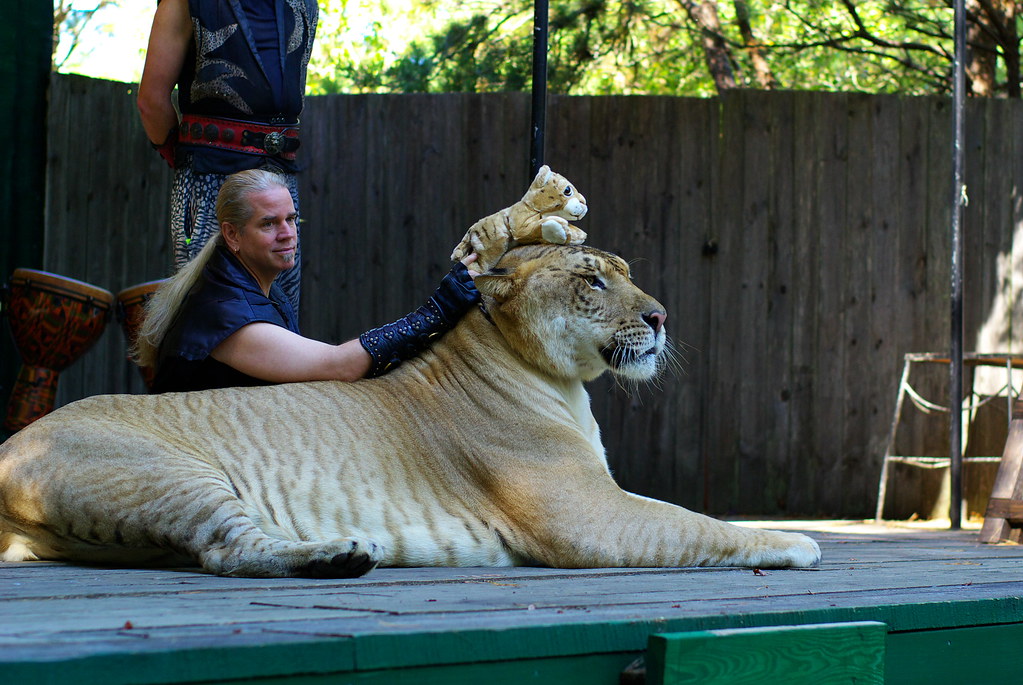 They tend to far exceed the size of both their parents and although they share similar characteristics with both of them, the liger tends to be more like a lion rather than a tiger.

The largest ligers often grow to lengths of more than 3.3 meters or 10.8 feet and way more than kilograms or 900 pounds.

However, there are reports of some individuals weighing more than 1000 kilograms or 2 200 pounds

The liger is an enormous animal with a large muscular body and broadhead, ligers tend to have sandy or dark yellow fur which is covered in the distinctive faint stripes inherited from their mother

Although other variations in fur color have been known the liger generally has a more lion-like appearance including the manes of the males, although a liger’s mane is not as big or as impressive as that of an adult lion.

They can grow quite large on some individuals but it is not uncommon for a male liger to have no mane at all along with their stripes which tend to be most noticeable around their hindquarters.

The liger may also inherit the spots found on the backs of the tiger’s ears along with the tufted fur around their chins despite their gigantic size and the fact that their parents are apex predators of different habitats.

The liger has a gentle and docile temperament, particularly in close proximity with handlers.

They have however been reported to be slightly confused as to whether they are lions or tigers as their most bewildering characteristic is the fact that they seem to love water.

Lion vs Tigers vs Liger

In the wild, it is not uncommon for tigers to enter the water either to catch prey or to cool down in the heat and so they are naturally good swimmers and this is a trait inherited by ligers

Lions do not like water and so it is often reported that it does take some time for the liger to take to its water-loving lifestyle.

Ligers have a strange sound which it makes, it’s a combination of lion and tiger mix sound, but more closely to that of a lion

Like the rest of the world’s felines, the liger is a carnivorous animal meaning that it hunts and kills other animals to gain its nutrition although the wild diet of the liger can only be presumed.

It is thought to be similar to that of a tiger mainly hunting larger herbivores including deer, wild boar, and due to their immense size possibly small vulnerable Asian elephants in captivity.

They tend to eat an average of 20 pounds of meat a day but it is thought that a liger would easily devour 100 pounds worth of food in one sitting.

The liger has an enormous and incredibly strong jaw with sharp pointed teeth which are ideal for tearing through flesh.

Just like their parents, ligers have a muscular body, and sharp claws which come in handy in catching prey.

The liger has been bred by people since the early 19th century when a litter of tiger cubs was born in Asia in 1824 it was more than 100 years.

There are controversies about cross-breeding lions with tigers, the liger seems to be a docile animal but there’s a great chance that it can only survive in captivity.

Today there are several ligers found in zoos and animal institutes around the world who are bred generally by accident and kept as a money-making attraction.

As you can see ligers are extremely strong cats and have amazing qualities but can they cope in the wild?

This is a very difficult and virtually unstudied topic, ligers can only be bred in captivity and they are mainly bred for zoo attractions or as pets for the wealthy who can afford them

Neither private owners nor Zeus wants ligers in the mindset of hunting down live prey for obvious reasons and virtually all of them are bred from second or later-generation captive lions and tigers which means their inherent hunting instincts are muted from the start right down to their genetic coding.

In addition to this, wild tigers and adult lions are known for being private more solitary creatures outside of their groups.

Lion cubs have a social and curious behavior, but later on, as they mature, they take to solitude.

ligers on the other hand retain this curious and social lion cub personality throughout their entire lives which is what makes them more ideal as pets.

Compared to lions and tigers you can’t find any information about liger hunting habits no matter how hard you look because all ligers are bred in captivity and fed non-living food throughout their lifespan.

Our guess is that they would be similar to house cats and that if they do end up hunting it is not for food but for sports, meaning, they would probably only go after small creatures like rabbits or squirrels.

Could Ligers survive in the wild

In terms of capability, most ligers have a hanging belly that many house cats develop rather than the lean appearance we think of when we think of a wild tiger.

Ligers are also much larger so if a liger had the same fighting and hunting mentality as a wild tiger or lion it should be able to take down much larger prey than either or comparably sized prey but with much more success assuming it can match the speed and chase the prey down.

But if you take a liger that was raised in captivity and introduced into the wild it would probably starve or get attacked and killed even possibly by a lion pride if it came into contact with one.

Their environment would also play a role, a single liger living on the African plains may not live very long

There are plenty of videos of water buffaloes goring and tossing lions through the air like dolls and we doubt that a liger would fare much better if caught by a water buffalo’s horns.

If the liger were attacked by multiple buffalo then it’s done for, a pack of lager would probably dominate through most water buffalo.

A liger and a tiger’s natural habitat of jungles and forests may not be the best option, the size of a liger would be detrimental to sneaking through a forest or jungle attempting to ambush prey and it may be hard for it to consistently sneak up on and catch food.

How To Survive A Komodo Dragon Attack

Can Gray wolves survive In Africa Among Apex Predators?