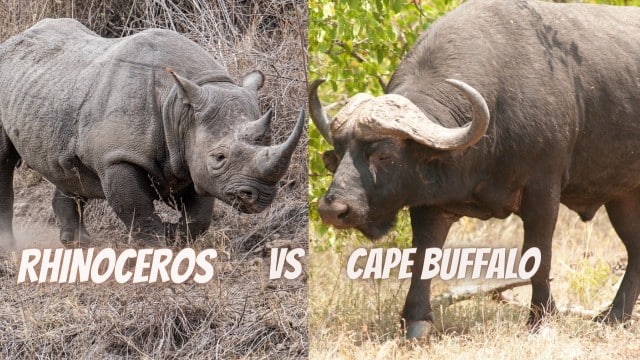 Cape buffalo vs Rhinoceros- Who would emerge victorious from a fight?

Rhinos and buffalos are two African animals known for their size and aggression.

They don’t generally care for one another, but when threatened, they can both become unpredictable and vicious.

The most common subspecies of the African buffalo are the four different Cape buffalo.

They can be identified by their size, color, and even horn shape.

In addition, there are the woodland buffalo, and savanna buffalo from West and Central Africa.

Rhinoceros sometimes referred to simply as “rhino,” is a big, heavily armored ungulate that is native to Southern Asia and Africa.

They boast distinct large horns on their noses and a thick skin formed of layers of collagen.

They are among the largest terrestrial animals in the world.

According to some estimates, they gore, tramp, and kill around 200 humans annually, making them among the most lethal creatures on the African continent.

African buffalo have short but thickset legs and a long, stocky body, giving them a shorter standing height than other large bovids.

The adult buffalo’s horns are its characteristic feature: they have fused bases, forming a continuous bone shield across the top of the head referred to as a “boss”.

Savannah-type buffalo have black or dark brown coats with age. The coats of females tend to be more reddish.

Rhinos are very large animals and, while all species differ slightly, they share common characteristics such as one or two horns, a broad chest, thick skin, poor eyesight and excellent hearing.

They are generally thought to move slowly because of their huge legs that resemble tree trunks, although they are capable of running at speeds of up to 64 kilometers per hour (almost 40 miles per hour) when necessary.

They also possess a short tail.

After elephants, rhinos are the second-largest land animal.

The black and white rhinos are the same shade of brownish grey, despite their different names!

The main distinction between the two species is their lips.

While the black rhino has a more narrow lip which is used to pull leaves into its mouth, the white rhino has a wide lip.

White rhinos have a hump of muscle on their neck and shoulders.

They can also be found in private game reserves, game farms, and a few of provincial reserves where they were reintroduced.

Both bovine tuberculosis and foot and mouth disease are transmitted by buffaloes.

Because of the potential for spreading to other animals, particularly cattle, they are not permitted outside of designated zones (red line areas).

Any buffalo that is reintroduced outside of these regions is bred elsewhere and is supposedly disease-free.

Buffaloes prefer regions in the bushveld with plenty of tall grass and wide savannah grassland.

They frequently inhabit reeds near bodies of water. Buffaloes frequently roam in the lush mopanie-veld.

Asia and Africa are home to rhinos.

All three species of Asian rhinos are excellent swimmers since they live in marshes and tropical forests.

Buffalo eat predominantly grass species and because of the large groups and size, they need grass that quickly regenerates itself.

They will even eat swamp or marshy materials. Buffalo are gregarious and will change their eating habits to their surrounding circumstances.

Rhinos are plant-eating animals known as herbivores, which means they only consume grasses, shoots, leaves, fruits, berries, and buds.

They can either be browsers, which primarily eat from bushes, shrubs, and trees, or grazers, which mainly eat from the ground.

Rhinos have evolved specialist mouths for their different styles of eating. For example, black rhinos have long, pointed lips for browsing foliage, whereas white rhinos have broad, flat lips for grazing from the ground.

Although they can live in herds of a few hundred,

Cape buffalo have been observed gathering in the Serengeti in large numbers during the rainy season.

Large herds decrease the possibility of any individual being singled out by lions.

The majority of the herd is made up of females and their young. Males may spend a lot of time in groups of bachelors.

African buffaloes have very weak hearing and sight, but a highly developed sense of smell.

Additionally, they appear to have trouble controlling their body temperature, that’s why they eat mainly at night.

Although they are quiet for the most part, the animals do communicate.

In mating seasons they grunt and emit hoarse bellows, and a calf in danger will bellow mournfully, bringing herd members running at a gallop to defend it.

Rhinos are solitary creatures, and both genders establish territories. They use their horns not only when fighting for territory or mates,

but also to defend themselves from potential predators, such as lions, tigers, and sometimes hyenas.

Unusually for an herbivore, rhinos are considered to be highly aggressive.

They are well known for having poor eyesight, but they have very good hearing and a keen sense of smell.

Now in a battle between these two giants, who would win? A cape buffalo? Or a rhinoceros?

On this one, I have to go with the rhino.

The buffalo is undoubtedly a tough animal, but it lacked the rhino’s size, the thickness of skin, and level of fury.

The rhino is not a particularly intelligent or well-sighted animal.

Therefore, it physically charges anything that comes close to it as a kind of defense against predators.

Even elephants have been known to be charged by rhinos.

Cape buffalo are better built for causing massive amounts of damage in an instant with 2 duller horns and a big boss in the middle.

Though black rhinos can deal much more damage over time with a single, longer horn used to impale/gore unfortunate victims and bleed them to death in the long run.

Rhinos are larger and stockier

The rhinos are also generally larger and stockier, so they can take many more hits.

When it comes to agility, both are comparable to one another, however, cape buffalo are significantly faster.

An average-sized bull buffalo could have decent chances against an average-sized female rhinoceros, but the bull rhinos are simply too large for any buffalo to be able to tank through.

Remember, those rhino horns may swing down and deliver a nasty uppercut to the buffaloes.

Rhino hide is also phenomenally thick and tough, and they’re built to fight each other.

If nature was left to its course, no animal would kill rhinos more frequently than other rhinos.

Buffaloes prefer exciting but non-lethal-shoving matches rather than fighting to the death.

Despite their toughness and aggression, rhinoceros are simply too large and powerful for cape buffalo to handle.

They are the real tanks of the animal kingdom.

Black Mamba in an epic battle with Inland Taipan

10 Strongest Predators In The Animal Kingdom