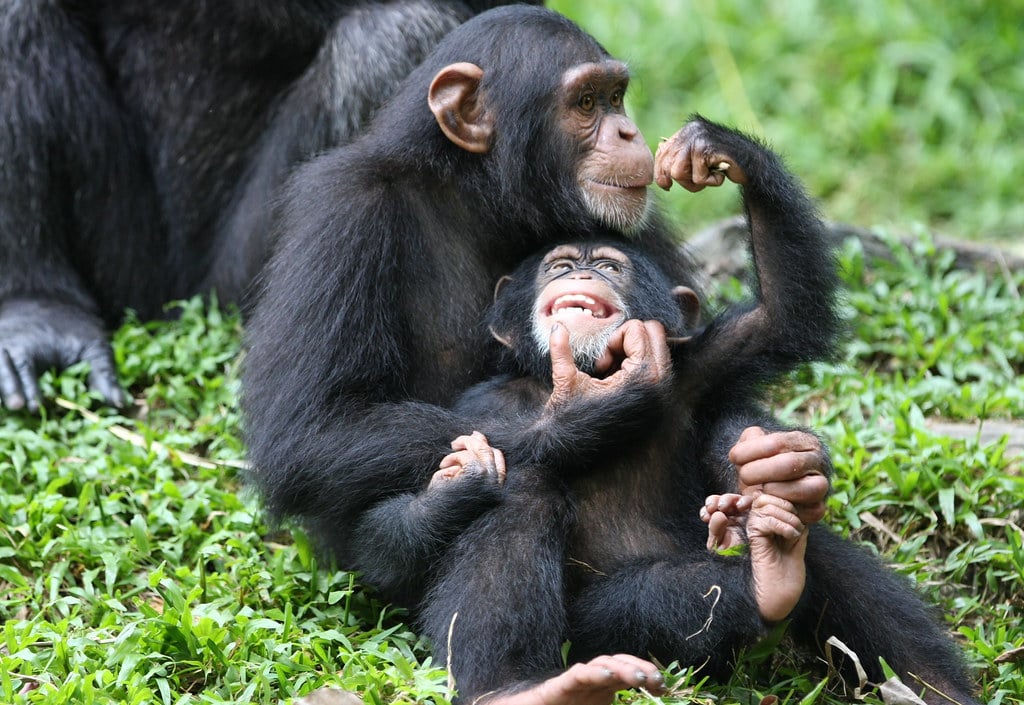 Chimpanzee family vs hyena pack who would win a fight between these two formidable groups? what do you think will happen when some of the most intelligent animals, chimpanzees, end up fighting with one of the best hunting structures in the world, the hyena clan?

like us, chimps are highly social animals, care for their offspring for years, and can live to be over 50.

In fact, chimpanzees are our closest cousins, We Share about 98% of our genes. They are known for being intelligent, social, and violent animals that live in complex Societies.

chimpanzees are highly social animals and live in communities of between 10 and 180 individuals.

Males will stay in their birth community, while females can move into neighboring Communities once they are old enough to breed.

Male chimpanzees defend their community’s territory against neighboring chimps’ communities and will kill members of other groups.

Chimpanzees are the only species other than humans to carry out coordinated attacks on each other.

Male and female chimpanzees mate with multiple partners throughout the year.

Mating occurs more frequently than required for breeding purposes and serves social functions as well, such as developing bonds between individuals.

chimpanzees search for food communally when foraging or hunting prey. A group of males will chase, corner, and kill small monkeys for meat.

Groups sit together for hours, “fishing” termite Mounds or enjoying the ripened fruits of trees.

Within spotted hyena Clans social dominance hierarchies are basically a lunch line with high-ranking females and their cubs getting first dibs on meals.

This is partly due to a phenomenon called male dispersal. After puberty, males leave the clan into which they were born.

when they join a new clan these immigrant male hyenas become the lowest ranking members of that new clan.

They are subordinate to any offspring of that clan’s females, any males native to that clan, and immigrant males Who joined the clan before them.

Since females have absolute say in mating and tend to mate with lower-ranking males, there is no pressure for males to fight for mates, which is a hypothesis that might explain males’ lower aggression levels.

chimpanzees are between 3-5.5feet ( 1 to 1.7 m) tall when standing upright like a human. However, they most likely walk on all fours using their knuckles and feet.

Males are slightly bigger than females. Males can weigh up to about 154Ibs. (70 kg) in the wild, compared with a maximum weight of about 110Ibs. (50 kg) for a female.

Chimps are stronger than humans, despite being smaller. in fact, they are about 1.35 times more powerful than humans as they have more fast-twitch muscle fibers which are good for strength and speed.

Chimpanzees are covered by a coat of brown or black hair, but their faces are bare except for a short white beard. skin color is generally white except for the face, hands, and feet, which are black. The faces of younger animals may be pinkish or whitish.

Among older males and females, the forehead often becomes bald at the back becomes gray.

The spotted hyena is a large African carnivore the largest of the hyena species.

Their appearance can vary from grey-brown to yellow-grey short fur with an irregular pattern of dark spots on the back and hindquarters a short mane and a subtle band of stripes on the neck.

However, there are some variations in size across regions spotted hyenas in Zambia weighing more than in other African countries.

Everything tastes good chimpanzees eat a wide variety of food scientists have recorded about 80 different items chimps eat, including seeds, fruit, leaves, bark, honey, flowers, and insects, this makes up most of their diet.

However, chimpanzees also hunt other wildlife, like monkeys or small antelope for meat. feeding is usually an individual activity, but sometimes chimps look for food together.

Clever primates. Chimpanzees are famous for using tools to get food.
They often strip a branch of its leaves and then dip it in an ant or termite hill to get the insects inside.

When water is scarce, chimps chew leaves so they are soft and sponge-like-this allows them to then soak up rainwater inside of tree holes.

In a large group, spotted hyenas are able to chase lions away from a kill. But during a hunt, the hyena’s impressive hunting skills come into play.

They are able to chase down prey over long distances while running at up to 37miles per hour (60km/h).
Spotted hyenas often pick out the young or weak from the herd, but they can kill even healthy adult ungulates. What they hunt depends on numbers.

The bigger the hyena clan, the larger its prey. This can include young rhinos, adult wildebeest, zebras, and Cape buffalo.

The hyenas work in groups when hunting such large prey, and young hyenas take years to become successful.

Most other predators couldn’t eat those things, even if they tried. There are some items that hyenas can’t digest, such as hair and horns, although they still eat them.

Now, what happens when a chimpanzee family fights with a hyena clan?

Chimpanzees are powerful apes that usually stick to the trees. They can be quite aggressive and have the power to match. They also have intelligence which could be handy in a battle. Their predators are mainly leopards which they have been known to fend off and kill in groups.

Spotted hyenas are second to lions when it comes to predators in the African plains. Contrary to popular belief hyenas are skilled hunters and lions actually steal their food more often than they steal from lions.

Armed with very powerful jaws these creatures have been known to take down anything shy of a zebra alone. This includes wilder beast and topi.

I think the result of these fights all boils down to the fact that leopards prey on chimps and can beat them in fights.

While hyenas don’t always beat full-grown male leopards by themselves they can beat smaller ones with ease.

So if hyenas can kill leopards and leopards can kill chimps, you already know what that means!

Actually, even chimps are predators, there’re not very effective predators. They attack with bad coordination and it often takes several chimps to kill another chimp or even just a small monkey.

Jaws tend to do a lot more damage than blunt force trauma and grabbing. Hyenas have bite force beyond that of lions, and they’re also skilled predators.

They instinctively know to target vital points on other animals as opposed to chimps who for the most part, target the face and the groins of usually other chimps.

Chimps despite their strength have a fatal evolutionary flaw. Just like humans, their skin is very close to the muscle. They bleed easily.

They don’t go into shock so quickly as humans and can take trauma much more effectively, but they can still just as easily bleed to death.

If and when the hyena Bites the chimp repeatedly, the damage will be devastating. The chimps could perhaps strike the hyena on the head in a combination of fury and fear potentially causing some damage, but hyenas are quite durable for their small build. Sometimes even surviving devastating attacks from leopards and lions.

The chimp could definitely injure the hyena, but the end result would be a hyena with a bitten face and/or even an injured forearm, but the ape would be disemboweled, or bitten up to a point where it bleeds out and dies. The hyena compared to the chimp is a true predator.

I also think the fighting experience is in favor of the hyena, considering the large animals that the clan is able to kill.