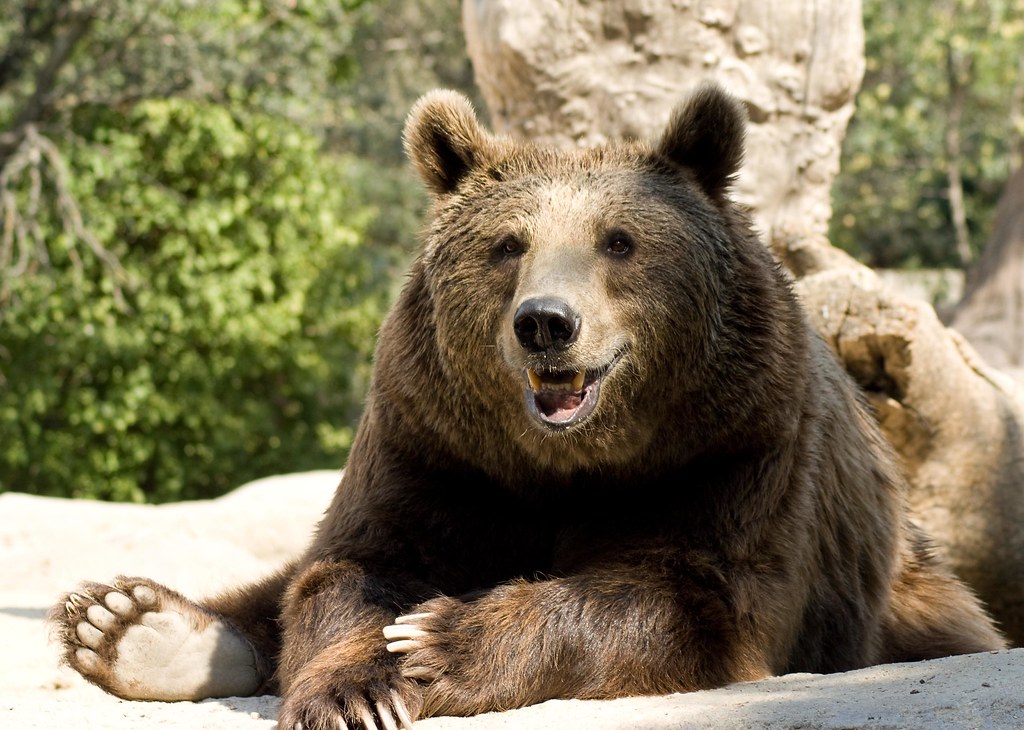 I’ve been thinking about it, and I’ve come to the conclusion that, while there are other big cat species in Africa, This continent is devoid of bear species! But why is that?

Bears are members of the Ursidae family of animals.

Commonly found in North and South America, as well as, Europe, and Asia.

Bears have small tails, nonretractable claws, and a great sense of smell. Except for moms with cubs, they’re usually alone.

Sun bears, sloth bears, and spectacled bears (sometimes known as Andean bears). But no one lives in Africa!

Stay with us until the end to find out together why there is no bear in this land.

Brown bears are found in many regions, ranging from deserts to forests and high mountain including ice regions.

Brown bears are typically found in mountain woodlands in Europe, and forests in Siberia, while tundra is preferred in North America, Alpine meadows, and coastlines.

They thrive in areas with a dense cover so they can shelter themselves during the day.

Africa is home to a plethora of wild animals. Lions, rhinoceros, hippos, and zebras roam the African plains.

Including diverse millions of insects and birds. Why aren’t there any bears in Africa?

Bears are omnivores that have adapted to forests, mountains, and deserts so on the face of it, their absence from Africa seems surprising.

There are currently no bear species in Africa. Brown bears used to roam freely in the Atlas Mountains, where they were previously endemic.

It is believed that bears had gone extinct in the African plains, and currently declining in Europe. Reason why you should never run away from brown bears

There are a few reasons why African bears do not exist now. For one thing, in order to obtain food, African bears require a lot of space to roam.

Humans, on the other hand, have gradually encroached on their domain, erecting settlements and farms on this terrain.

As a result, bears have been forced into ever-smaller regions, making survival increasingly challenging. Then there’s animal competition.

African bears were thought to be scavengers and herbivores. The bears fell behind as humans and other creatures adapted.

They became extinct as a result of their inability to locate food. Finally, there is poaching.

For millennia, humans have hunted wild animals, resulting in the extinction of several species.

Were There Ever Any Bears in Africa?

There is evidence that bears once roamed the African plains.

Atlas bears were once sub-species of Brown bears, living in North Africa at the time

They covered much of Moroccan, Libyan, and Tunisian mountains and forests.

They resembled their Miocene ancestors in appearance, with slightly more orange fur and a shorter face.

The Atlas bear is thought to have been driven to extinction by the Romans, who used them for sport in their coliseums, and later by other hunters.

The last Atlas Bear was killed in the 1870s.

Throughout history, there’s no records of bears living in Sub-Saharan Africa.

The extinct grizzly bear is the only bear species known to have lived in this portion of the planet. Watch as Grizzly bear defeats a tiger in a fight

Ursid Agriotherium africanum, had thrived until about 1.5 million years ago in Sub-Saharan Africa.

Agriotherium Africanum was a formidable combatant with the largest bite of any bear ever known, according to bear evolution.

Theories say that the bears were able to intimidate other animals off carrion, such as bovines, horses, camelids, and rhinoceroses, due to their sheer size.

This African bear, on the other hand, was assumed to be at ease consuming fruit and plants due to his omnivorous habits.

Agriotherium is thought to have gone extinct around the end of the Pliocene epoch, a little over 2.6 million years ago.

Can a Bear Survive in Africa?

Yes, bears could previously have lived in the Atlas Mountains.

Bears, on the other hand, are unlikely to live in Africa today since they are not acclimated to the habitat.

In Africa, there were previously native bears. These animals have acclimated to the African environment and may be able to live there again.

Bears that have acclimated to other environments, on the other hand, may not be able to live there.

The temperature is significantly hotter and drier than in other places of the world where bears can be found.

In addition, I believe that the climate in North Africa, where Atlas bears lived, is now much warmer than it was a few hundred years ago due to global warming.

There are several varieties of dangerous animals in Africa that could kill bears, crocodiles, hyena packs, and lion pride.

but I don’t think that would be a problem, because brown bears are omnivores.

There is evidence that suggests bears once lived in Africa and now reside in South America, Europe, Asia, and North America.

Honestly, it is hard for me to believe that nowadays, a bear could survive in Africa if we are talking about brown bears.

In the case of polar bears, it is clear that they have no chance of being introduced to Africa.

How to survive an Electric Eel attack

Why do tigers have stripes, and lions don’t?