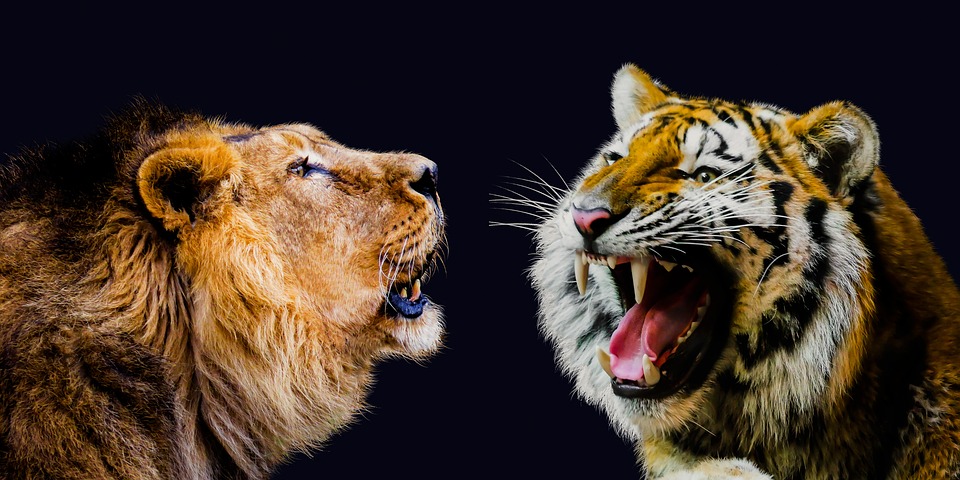 What if tigers would live in Africa together with lions?

Because our ancestors came from Africa, we may all be forgiven for thinking of it as the home of all creatures.

The progenitors of tigers did, in fact, originate in Africa. The largest of the big cats, the tiger, does not dwell in Africa.

Though the continent is home to a variety of great cats and predators, tigers are not among them. Wild tigers are found in Asia across 13 tiger range countries.

Tigers in the wild have a diverse natural environment that encompasses a number of habitats.
While they prefer forested habitats, they can also be found in grasslands, mangrove swamps, and even rocky terrain.

These majestic creatures can be found in China, Indonesia, and southeast Asia, to India and parts of Russia.

While tigers used to have a large territory, poaching and habitat destruction have put many subspecies of tigers on the verge of extinction. In Asia, there are around 4000 tigers left in the wild. The coat of a tiger can take on a range of colors. Caspian Tiger

A Bengal tiger’s normal colors are an orange body with black stripes running down the flanks.

Adult male Siberian tigers can weigh up to 700Ibs (320kg), while females are significantly smaller, weighing up to 400Ibs(180kg).

Why are there no Tigers in Africa?

We’ve established that wild tigers aren’t native to Africa, however, they might easily blend in as predators amid the continent’s animals.

Tigers, lions, and leopards are all descended from the same big cat progenitor. They are all felines belonging to the Felidae family, which originated in Africa.

Felidae ancestors traveled to Asia some 2 million years ago and evolved into striped tigers.

Scientists aren’t sure why, but after evolving and settling in Asia, tigers never returned to Africa.

It’s thought that the passage of time, tectonic movements, and geographic boundaries made it impossible.

Africa has never been home to the contemporary tiger for whatever reason.

Could Tiger survive in Africa?

First of all, it is clear that tigers love water, which is why they would probably hate Africa.

As for food, I don’t think it would be a problem for tigers, it is known that it feeds on ungulates in Asia as well, and Africa does not lack such a thing.

If a leopard, which has a tiger-like lifestyle, manages to survive and hunt there, surely a tiger could. However, in this case, the competition will appear.

A lone tiger would have no chance against a group of these rivals regardless of what you think would happen in a one-on-one fight.

A tiger, if he manages to hunt and kill an animal in the plains would then be forced to give up his meal to scavengers like lions or hyenas or die fighting.

Lastly, lions or hyenas are hardly the only things a tiger would have to worry about.

There are also Cape buffalos and hippos, two animals that are far more aggressive than anything the tiger faces in its native habitat.

Imagine a tiger trying to dip in a watering hole only to be confronted by a croc or hippo.

Anyways, if we introduce tigers in Africa they can adapt well to the habitat. Surprisingly tigers camouflage works well in the Africa environment.

The Tiger is more than capable of surviving in Africa on a physical level. It is comparable to a lion in terms of size, speed, and weight. Where the problems will come from our competition.

Because their ancient range included the deserts of the Arabian Peninsula to the warm, tropical jungles of southern China and Indonesia, tigers are known to adapt to a variety of settings.

Different species have evolved over thousands, if not millions, of years to fit a particular niche in nature.

This is not to say that they would be unable to capture African game as has been proved at the Laohu Valley Reserve On former sheep farms in the free state province of South Africa.

Tigers and lions have coexisted in India in the recent past. Lions in the grasslands savannahs and tigers more near the forests.

But their territory did sometimes overlap in the peripheries so there would be some conflicts between these two Because they compete for much of the same prey, they are referred to as apex predators.

No, the tiger would not replace the African lion as the Apex predator in Africa they are often in large pride with two or more males and 10-15 or more females and subadults, resulting in the death of a lone tiger.

Tigers probably could survive in the African Congo basin rain forest but that would be another reason not to introduce them to Africa as they would prey on the threatened chimpanzees and gorillas.

In the African forest, they would adversely affect the leopard numbers. So by considering what I said if tigers are introduced to Africa, the property then gradually it will form social groups just like lions and they will hunt by forming coalitions.

What is your opinion? I am waiting for your answer in the comments!