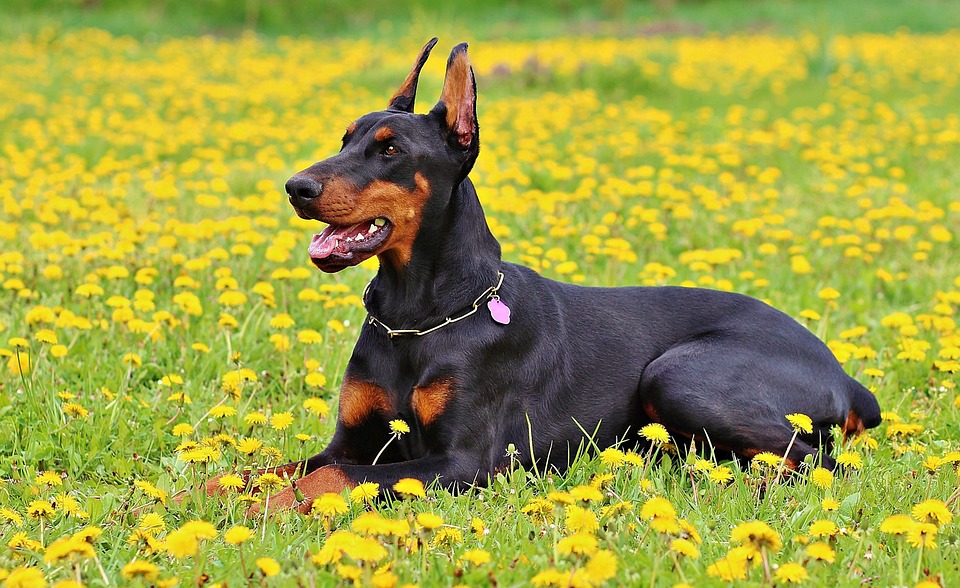 When we talk about guard dogs both the Doberman pinscher and German shepherds make a great choice.

This is because both dogs are very active, loyal and they also make excellent companions.

If you’re stuck between Dobermans and german shepherds, don’t worry there are distinct differences between the two that’ll help you determine which dog is best for you and we’ll talk about it.

Both the German shepherd and Doberman pinscher are big dogs who are always seen working alongside Police or the military.

While German shepherds are consistently ranked as one of the most popular dog breeds Dobermans are not that behind as well. Both are amazing dogs.

But which among the two are best suited for your lifestyle

We’ll tackle some of the most interesting information to help you decide which of them you should take home. So without further ado let’s begin.

Knowing the breed’s history is a huge factor to consider when choosing a dog this is because their history will affect the dog’s possible temperament health conditions and more.

German shepherds were developed in 1889 by captain max von Stephanitz. He wanted to create an efficient servant.

The result was a dog that is smart, loyal, and good-looking.

Aside from being herd dogs, german shepherds also worked with police to sniff out illegal drugs, they also served

in the armed forces and played a huge role in world war on the other hand the Doberman pinscher was developed by Carl Friedrich lewis.

Doberman used to own a local dog pound and so he decided to use different dogs to develop a Doberman pinscher.

While there are no exact records on which breeds were used to develop these dogs the belief is that Dobermans used genes from rottweiler and greyhound, german pinscher, german shorthaired pointer, great Dane, Weimaraner, and old german shepherd dog.

Like German shepherds, Dobermans were also very effective guard dogs which is why they serve in the police and military during world war ii. These dogs became the official u.s marine war dogs.

Dobermans are intelligently devoted to loyal dogs which enable them to be excellent protectors however they tend to get closer to one family member, although it does not mean that they won’t get along with others.

German shepherds are said to be better with kids compared to Dobermans.

Although both dogs will adapt well in homes with children.

it is important that children know how to properly play with dogs let them know that ear and tail pulling is never accepted.

The same thing goes for dogs, while they make great playmates for children, supervising any interaction between a dog and a child is needed just to prevent accidents and troubles.

Since both dogs have high protective instincts and guarding tendencies it is expected that they will defend their family and territory at all costs.

Both the German shepherd and Doberman are large dogs that weigh around 50 to 100 pounds with height at around 26 to 27 inches at one year of age, once they are fully grown Dobermans are taller and bigger than german shepherds while the latter is shorter and stockier.

They are usually black and tan, although they may also be solid black.

One of the most common misconceptions about Dobermans is that they don’t shed maybe this is because of their short hair. Doberman’s shed won’t be as noticeable as a German shepherd’s hair.

On the other hand, German shepherds have double-coated hair that sheds heavily twice a year.

It’ll be a great idea if you decide to own this breed, for both dogs, regular brushing is necessary to keep their hair clean as well, as to evenly distribute their natural skin oils.

Brushing them twice or thrice a week will keep their coats in their best condition.

However, you may need to brush German shepherds more often especially if they blow their coats.

Fortunately, both dogs do not require professional grooming which means that you can groom them yourself

Since both dogs are highly energetic and intelligent, plenty of physical and mental exercises are essential to keep

them healthy as well as prevent them from becoming bored, as you may know, a bored dog will result in the development of destructive behaviors including excessive barking digging and chewing.

Generally, both German shepherds and Doberman pinschers need about an hour of intense exercise every day

However, some owners claim that these dogs need at least two hours of exercise a day therefore they need an owner with an active lifestyle, long walks won’t be enough on either of these dogs.

They need to take on more intense activities including running or engaging in agility courses fetching games or other fun activities.

You’ll also need to purchase durable chew toys as well as puzzle toys to enable them to stimulate their brains even inside the house since both dogs are intelligent.

Mental stimulation is also necessary to keep them happy and healthy training, both dogs are very intelligent in fact

they are both included in the most intelligent dog breed in the world.

While this means that they learn commands quickly it could also mean that they will try to outwit you therefore establishing yourself as the leader of the household is very important for these dogs to listen to you otherwise training would be a challenging task.

in addition, because both dogs are protective and loyal, proper training is important for them to act accordingly in

Both the German shepherd and Doberman pinscher is considered healthy breeds although the former has a longer life span of 12 to 14 years while Dobermans can live for around 10 to 12 years.

For german shepherds, some of the health concerns that you need to watch out for are hip and elbow dysplasia

Cardiomyopathy and cataracts, on the other hand, Dobermans are prone to heart problems hip dysplasia, and spinal instability. They should also be tested for von wild bran’s disease.

To ensure that your dog is healthy make sure that they visit the veterinarian regularly at about once or twice a year.

In the end, both dogs are loyal, protective, intelligent, and active.

They need owners who are active enough to keep them busy therefore if you’re a less hard-working person who prefers sleeping on the couch most of the time then neither of these dogs is for you perhaps one of the biggest differences between the two is their physical appearance.

If you want a dog that is short-haired and is thinner yet bigger then go for Doberman pinschers.

On the other hand, if you prefer a companion that looks more like a huge stuffed animal then german shepherds would be a better choice.

Regardless of your choice providing your dog with the right diet and exercise, regular visits to the veterinarian and

plenty of love, time, and affection is very crucial if you want a dog that is happy, healthy, and well-behaved.