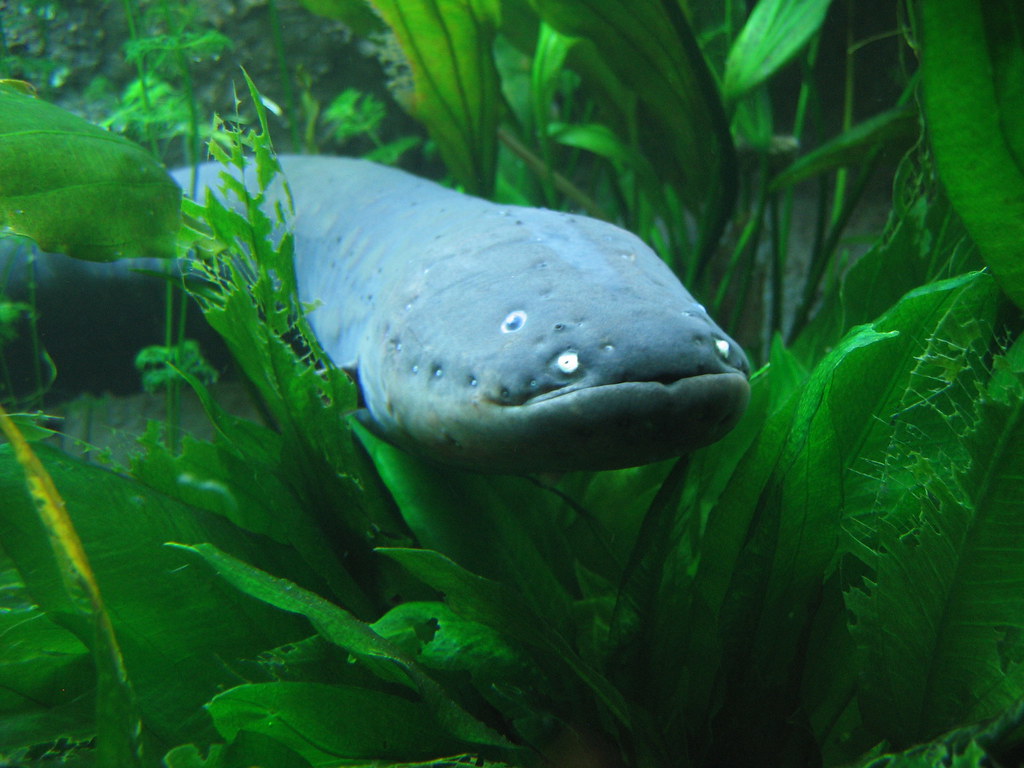 Are you aware that an Electric Eel is the toughest animal in the Amazon?

Unless you’re at the top of the food chain, everything else will try to eat you.

The electric eel has managed to survive by getting creative.

The electric eel has found a way to defend itself against apex predators by its ability to generate electricity through its body.

So, what do you think happens when a deadly predator like the cayman, the amazon’s version of a crocodile, tries to eat an electric-powered eel?

Electrophorus electricus, sometimes known as the electric eel, is an interesting fish. Despite the fact that they have the word “eel” in their name and seem like eels, they are not eels at all.

In reality, they belong to the Gymnodaformy family of knife fish, and they’re more closely linked to a catfish or carp than to a typical eel. Electric Eel is the toughest animal in the Amazon

Up until 2019, it was believed, there were only one species of an electric eel, that was before an expedition found and classified two more species

An electric eel can be 8ft in length and 44 pounds in weight. Its habitat is in the Amazon, in South America.

They can be found in slow-moving waters, swamps, and freshwater creeks. They often form groups and stun prey.

They feed on Fish, Shrimp, Crabs, crustaceans, small amphibians like frogs, toads, salamanders, and newts. Electric Eel is the toughest animal in the Amazon

Tribesmen used to lead herds of wild horses into eel-infested ponds, where the horses’ hooves would churn up the muck and remove all of the eels out.

This technique was witnessed by Prussian explorer Alexander von Humboldt who in 1800 became utterly fascinated by this mystical creature.

In a remote rainforest village in Venezuela called Luciano’s. Alexander devised a series of rudimentary tests to determine the strength of the electric eel’s shock.

Humboldt literally touch the eel and objectively measure the power of every electric zap since there were no voltmeters or amperage meters.

Alexander received some shocks from the electric eel and reported how his muscles ached and twitch till the next day.

Three pairs of specialized organs at some point in an electric eel’s stomach are the key to their astonishing ability. Electric Eel is the toughest animal in the Amazon

The internal body organ of an electric eel has cells modified into electrolytes stacked on top of each other in rows, the exact replica of what you see in battery cells.

The organization and stacking of these electrolytes allow a current of charged ions to flow through the building current as it charges up electric eels.

how do electric eels defend themselves?

After sensing a disturbance in the water, electric eels emit two or three strong pulses as much as 860 volts.

These high voltage pulses act as a taser, hijacking the animal’s nervous system causing the prey to violently twitch in the water this sudden movement generates waves that reveal the animal’s hiding place.

Stunning its prey and eating them whole.

electric eels can kill small fish and even big animals like dogs, and caymans

But in the amazon, caiman who finds itself often tussling with the electric eel either dies of shock or manages to run away. Now you know why an electric eel is the toughest animal in the Amazon.

There are only records of humans drowning in South America as a result of an eel shock.

There is however no record of humans dying from the shock of an electric eel.

So you might be able to deal with one electric eel, but just as you’re thinking about going for a dip in a Venezuelan pool Swamp, reconsider.

Electric eels hunt in large packs and work together, according to a recent research excursion into the Amazon.

As much as 100 eels build a large prey ball circling their victim and shocking them with crazily massive amounts of electricity to attack and damage their prey, delivering high energy enough to stun their prey.

It’s easy to see why electric eels are known as the Amazon’s taser; this slick shocker is more than just a frightening jolt of static electricity, so unless you enjoy electrical torture, it’s definitely best to stay out of the water.

5 Animals That Could Defeat a Sperm Whale

Honey Badger Or Electric Eel – Which Is Tougher?