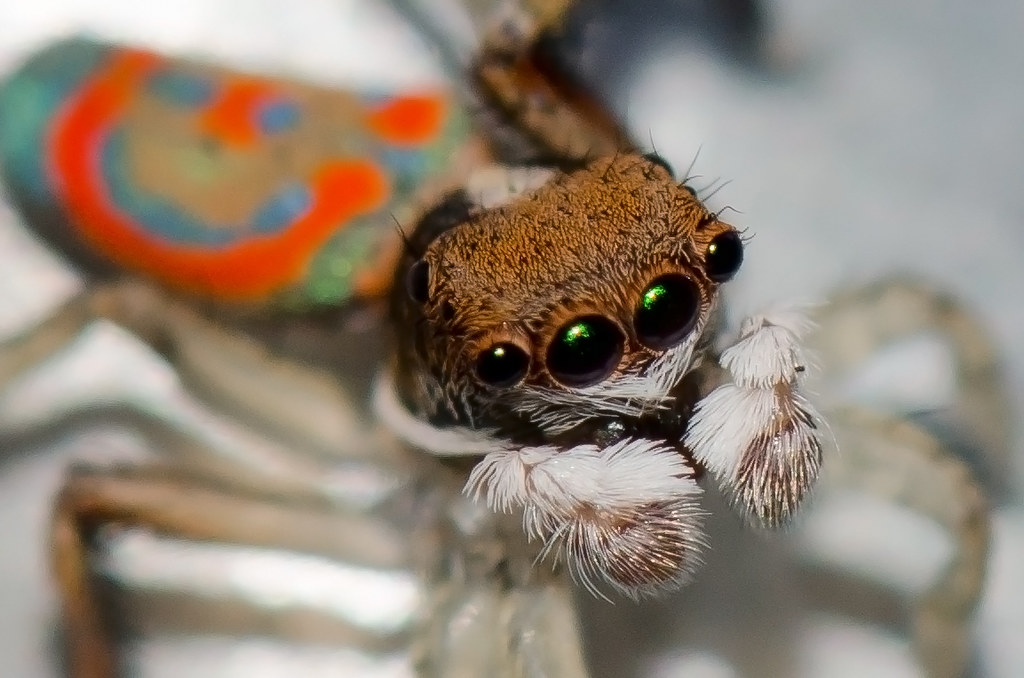 Peacock spiders are scientifically referred to as Maratus volans, belonging to a species of the jumping spider family (Salticidae).

These spiders can be found in areas of Australia and distributed evenly across vast habitats. They have a unique visual aid that enables them to see the full visible spectrum and U-V ranges.

Their specialized vision enables them to detect and pursue prey. Male peacock spiders have beautiful colorful abdomen which it uses to attract females during courtship

Peacock spiders are the size of a grain of rice.  They are commonly found in their natural grassland habitat.

How does a peacock spider attract a female?

The males have superb eyesight which helps in their search for a mate. Once a female peacock spider is found, the male produces a series of vibrations known scientifically as rumble-rumps.

The female peacock spider will then sense his movements through her legs, the female demands a suitor who can produce soothing vibrations.

Anything muddled or intermittent is unacceptable. The female peacock spider is the biggest threat to males.

The road to finding her is silken and littered with the remains of unsuccessful suitors who didn’t please her.

A stark warning that if the male doesn’t get the dance right, she’ll strike in less than a tenth of a second and injects a lethal dose of venom into his brain, and kill him.

Are they venomous to humans?

Now, the male peacock spider has to dance to win her over. He unfurls his striking fan and begins his routine dance of attraction.

Sometimes, even his party outfits and his best moves aren’t enough to impress her and so he has to step it up.

As this is often the case in the mating game, it’s not the males, but the females who call the shots.

The more compelling the dance, the more likely she is to accept his advances.

The mating ritual can go on for up to 50minutes. But at last, his performance is rewarded and they mate.

While his front legs rotate her abdomen into position, he gathers his sperm and passes it into her reproductive organs.

He has done his part and satisfied her needs.

What happens to Australian peacock spiders after mating?

After mating, the males might jump off quickly and escape while the female begins to rearrange her abdomen which has been twisted at a 180-degree angle.

But, if the male doesn’t jump off quickly, the female will apprehend and kill him. After all, his body will be the perfect nourishment for her eggs.

This commonly happens in many spider species, females often eat the males before, during or after mating.

There are over 50 different species of peacock spider – each dancing their own routine – many in the gardens and green spaces of Australia’s cities.

The wood frogs can stay Frozen for 7 months

How To Survive A Komodo Dragon Attack