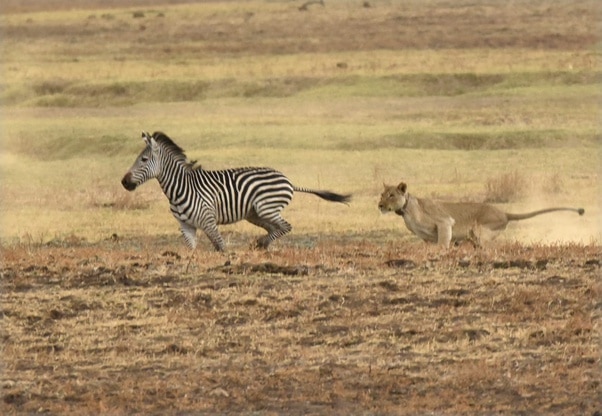 Are you fascinated by wildlife? Have you ever wondered what would happen if a Zebra encounters a Lion?

Lions are known as the “King of the Beast” because they are apex predators with great strength majestic mane. The lion has the loudest roar of all the wild cats; it is reported that a lion’s roar can be heard from up to one meter away.

Hence the name “King of the beast”…

I know a lot of you believe that Lions are apex predators and so can overpower any animal…That is exactly true, but you should note that Zebras have been known to fight back and in some cases Injured Lions who try to attack them.

Zebra mothers can be extremely aggressive when it comes to protecting their foals (young zebra).

Even for lions, zebras are not simple prey to hunt, contrary to popular belief. Below are Reasons Why Zebras are not easy prey to Hunt. South African man escapes jaws of 15-ton Whale

1 Zebra Are Faster Than Lion

They’re extremely fast, much faster than any lion – a single zebra or a stampeding herd can reach speeds of up to 68 km/h (compared to a lion’s top speed of 60 km/h).

Even though these herbivores don’t have much of a head start when it comes to avoiding ravenous hunters, evolution has sculpted out a solution: 10 Most Fearless Animals in the wild

Zebras gradually become faster as they continue to sprint because their hooves allow them to outrun their enemies with superior stamina, to the point of running for kilometers at a stretch.

lions, on the other hand, lack stamina since they reach full speed in short bursts and must stop chasing at some point to prevent overheating and lagging – and this is what offers zebras a fighting chance.

3 Lion vs Zebra Fight to the death

In light of this, fighting back is not the first line of defense for zebras (adults or foals) when confronted by lions; instead, they run like hell in the opposite direction. Fierce Nature of Zebra in the Wild

Things don’t get any better as a hunting lion catches up to its zebra prey. The striped zebras are not only quick, but also extremely deadly and powerful, since a single kick from those rear hooves can crush a lion’s brain, hurt it, break its back, or knock it out of action — as a result, any error the golden cat makes when tackling a zebra can mean disaster.

Not only that, but if it runs out of choices, a full-grown zebra may fight back, using its larger size (about 320 kg vs. 130–190 kg lion), horsepower, anger, and devastating hooves to battle or even kill the cat.

This was the case of a mother zebra who successfully protected her foal from a lioness (see above) by violently headbutting her and then kicking her in the face, ensuring that her young had a fighting chance.

Another example: in the video below, a zebra successfully escaped and rejoined its herd by attempting to drown a lioness in deep waters, while the fatigued lioness gave up.

This is just further proof that, while zebras may look to be charming and harmless, they are dangerous animals who will not go down without a fight…

4 In Most Cases, Lions Always Win a Fight Against Zebras

But, most of the time, all of these attempts are insufficient, because a large number of lions (whether alone or in pride) can still be swift, powerful, and agile enough to bring down a zebra and kill it.