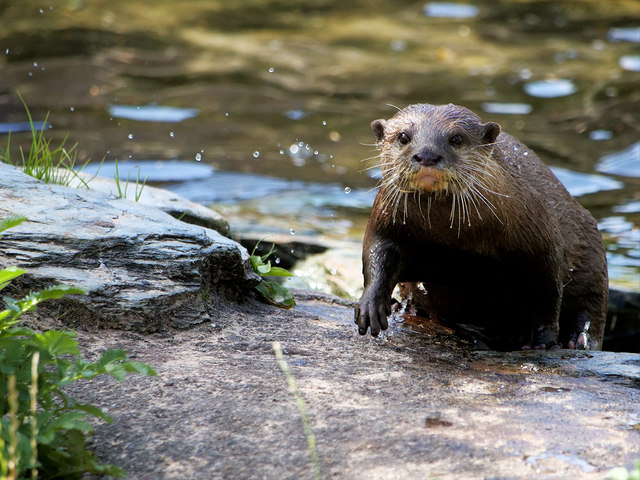 Giant Otter vs Honey Badger – Who Will Win in a Fight?

An epic animal battle that’s occurring in the world’s most unfortunate zoo.

It seems that the aggressive amazonian giant otter and the fearless and ferocious honey badgers have encountered each other and are brawling as we speak.

While we wait for our intrepid cameraman, wild to race to the scene.

We’ll get into details about each of these ruthless predators then we’ll join dusty at the scene of the fight so stay tuned to the news to see which of these brutes prevail.

The Giant otter is the world’s longest member of the weasel family, the giant otter lives only in rivers and creeks of the amazon Orinoco and la Plata river systems.

These muscular predators grow to over six feet in length and can weigh as much as 75 pounds.

Giant otters are terrestrial mammals with an amphibious lifestyle and are well adapted to life in and around the water.

Firstly their fur is so dense that it doesn’t allow water to penetrate the skin level.

They have a powerful wing-like tail, webbed feet tipped with sharp claws, and highly sensitive whiskers that help locate prey.

Underwater they are able to close off both their ears and noses when they dive underwater, they possess excellent senses of hearing and smell and unlike most others, they have excellent vision.

They also have a very pronounced midline or sagittal crest on top of their skull that serves as a mounting point for the jaw muscles indicating a very powerful bite.

Giant otters are highly social animals that live in extended family groups of up to 20 members called romps.

Otter is territorial and defends their den in hunting territory, usually by chasing off other romps or even banding together to harass and chase off large predators such as caiman.

They become exceedingly brave and most aggressive when defending their young.

Most of the time these encounters end in conflict, but occasionally they can become violent which can lead to fatalities.

Though they are very social, giant otters typically hunt alone or in pairs though they will hunt together in packs occasionally to take out larger predator-prey species like caimans.

The giant otter’s diet consists mostly of fish with piranhas being a particular favorite.

When there isn’t an abundance of fish they will eat crabs, small caymans, and juvenile snakes including anacondas giant otters eat about 10 percent of their body weight in a day and are very efficient hunters.

I ate 10 percent of my body weight and fried catfish one time let’s just say it was a long night.

They are highly agile hunters lunging and twisting and attacking from all angles, they generally make a kill by swiveling at the last instant to clamp prey into their powerful jaws.

They then bring their prey to the surface and eat it headfirst and what’s described as a noisy messy fashion. PITBULL VS HONEY BADGER – Who would win a fight?

Honey badgers are members of the weasel family and are widely distributed throughout Africa southeast Asia and India.

They have short stocky bodies and rarely stand over nine inches tall at the shoulder but they can grow to 38 inches in length and weigh as much as 30 pounds. They have very strong legs with long sharp claws.

Honey badgers also have somewhat short but sharp teeth and incredibly powerful jaws strong enough to bite through a tortoiseshell.

When they kill an animal they usually eat the entire thing bones and all.

For defense, honey badgers have very thick tough skin that is loose on their bodies, this allows them to twist around to bite and claw a predator who has grabbed them by the back of the neck.

Honey Badger or Hippopotamus – Which is more Aggressive

Their skin is so tough it can resist bee stings and even porcupine quills.

Another thing in the defense column is their resistance to the venom, they regularly kill and eat cobras.

They also have a gland at the base of the tail that allows them to spray a foul-smelling aerosol similar to that of a skunk.

Honey badgers are known for their mean and aggressive nature and seemingly will go out of their way to pick a fight they even hold the Guinness book of world records title of world’s most fearless creature. Wolverine vs Honey Badger- who wins in a fight

It’s reported that when attacking larger prey species they will castrate the animal and wait for blood loss to weaken it before going in for the kill what an absolute nightmare of a beast honey badgers are.

Someone left the honey badger’s enclosure unlocked and it escaped and made its way into the giant otter’s enclosure sounds exciting.

The Giant otter is no slouch as far as speed and strength are concerned and he’s nearly twice as large as the honey badger.

But the honey badger is a notoriously vicious predator with a powerful bite and sharp claws so this battle should be a close one.

In Conclusion: Giant Otter VS Honey Badger. Who Will Win The Fight?

Now According to Wild our Cameraman.

The honey badger and the giant otters are facing each other and the honey badger keeps circling trying to find an opening in the otter’s defense he keeps darting in to bite but the otter so far has kept his distance sounds like tensions are high.

crunching bones there’s blood everywhere, oh the otter agile artisans managed to sink his sharp canine teeth into the honey badger’s neck but it seems like the badger’s very dense fur has offered some protection and the damage to the honey badger is minimal.

The honey badger has managed to twist his body around in the otter’s grip and is raking the otter’s body with sharp claws, the pain of the wounds has caused the otter to release his grip.

The honey badger has darted beneath the otter and tore off his genitals blood is soaking the sand of the exhibit and the uh otter retreats to a corner.

But it doesn’t look good, he’s weakening, he’s stumbling, and now he has collapsed onto the ground and is breathing very shallowly.

This Otter is no more we have a winner the pernicious voracious predator is known as the honey badger.

What would happen if this battle had occurred in the water?

The otter might have had an advantage but on dry land, I just don’t think he is prepared for the ferocity of the honey badger.

Let us know your thoughts in the comment section

TIGER VS JAGUAR – Who is The Real King of The Jungle?

PITBULL VS HONEY BADGER – Who would win a fight?