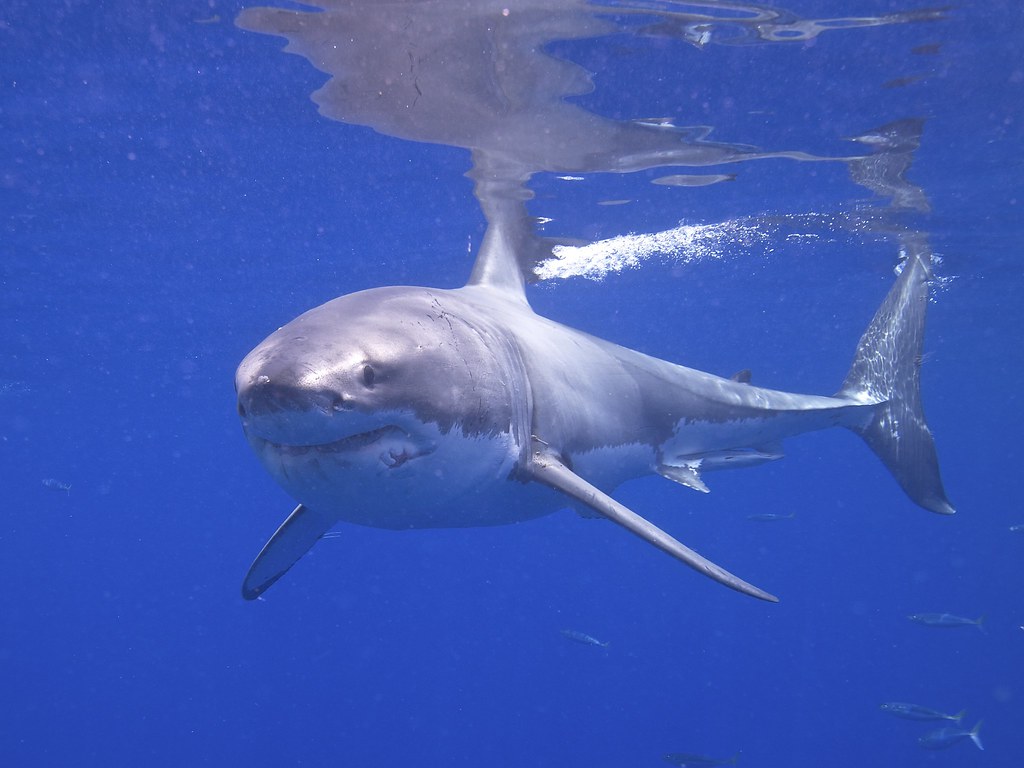 Great White Shark vs Saltwater Crocodile – Which is stronger?

The Great white shark is a majestic and dangerous cartilaginous creature that has caused men to tremble in fear and admiration. They are one of the largest and fiercest predators of the ocean.

Crocodiles are large and Majestic reptiles, that can be found in tropical areas of Australia, America, Africa, and Asia.

They belong to order Crocodilia, animals found in this order are caimans, gharials, and alligators.

The body of the white shark is robust and fusiform, about 13-22 feet in length but the average is 19 feet. Its weight is between 6600 pounds and 7500 pounds.

The caudal fin is crescent-shaped, and its upper and lower lobe is long and of very similar size, almost symmetrical.

The mouth measures 3 to 4 feet wide, and they have small eyes and nostrils at the end of the snout.

The back is gray or blue, but the lower part is lighter and this shows body discoloration. This characteristic gives an advantage when hunting because prey does not notice the figure of the shark, which is confused with the bottom of the ocean.

The body length of the saltwater crocodile is between 16-23 ft and can weigh up to 882 – 1543 Ibs, and just like most animals, males weigh more than females.

They are grey or brown in color and they have a broad, heavyset body with a large head.

They have powerful jaws and strong limbs that are short. These creatures have ridges running from their eyes to their snout, which are more noticeable in mature animals.

A valve separates the mouth from the throat in saltwater crocodiles. and this enables them to open their mouth while they are underwater.

And this is why they eat their prey above water or on land making it easy for them to swallow.

They can also be found on the coast of North America, and also in the Atlantic ocean of southern Mexico.

The great white shark lives primarily in the waters of South Africa outside of the American continent, Oceania, Japan, and the Mediterranean Sea, In South Africa’s Dyer Island, there is a sizable population there as well and that is why there is a commonplace for research about their life.

They will travel as far upstream as they can swim, often taking advantage of seasonal floods to access areas that are normally too difficult to reach.

Saltwater crocodiles can live in the open ocean for long periods of time and will cross enormous stretches of water to find new territory.

Because of their capacity to disperse, they are found throughout Southeast Asia.

The great white shark is a solitary animal that can rejoin with other members of its species.

He’s been sighted a few times with a female or male companion, and occasionally in small groups.

It’s likely that there’s hierarchical dominance in their groups, with females in charge.

However, huge individuals overpower little ones. For a long time, the residents of the group have dominated the newcomers.

This shark is active both day and night. Interestingly, they jump out of the water sometimes to look at the surroundings and look for prey.

They are not aggressive with their own species, but if they feel threatened, they may bite as a warning.

The Great white shark is commonly referred to as a “Man-eater predator”.  It is a formidable, aggressive, and effective predator, although it has no fondness for humans.

The attacks are frequently the result of a shark mistaking a person for prey, and as a result, the victim is attacked.

They take a “test bite,” but it’s unlikely that it will continue to eat once it realizes it’s not its typical food.

The Saltwater Crocodile is considered to be one of the most intelligent and complex reptiles on the planet.

Their barks seem to be a way in which they communicate with each other.

They seem to have a unique way of communicating with four different calls. The Saltwater Crocodile spends most of its time thermoregulating to maintain its body temperature.

They frequently go into the water with only their eyes and nose visible if they feel too hot and remain that way underwater until they cool.

If they become too cold, they lay in the sun on flat rocks until they warm up.

Great White Shark vs Saltwater Crocodile – which is stronger?

Despite their large jaws, great white sharks do not have the strongest biting force among sharks due to their diet.

biting through a seal’s skin is very different from biting through the shells of a turtle. Based on its jaw and skeletal structure.

A GWS is said to be capable of a bite force surpassing 1000kg, according to a computer simulation.

There’s a species of Crocodile called the Australian saltwater crocodile. They hold the record for the world’s most ferocious jaws.

Crocs and sharks have extremely distinct types of teeth due to their preferred prey. A crocodile’s prey is typically not only larger than a shark’s but also has much stronger bones and skins.

A croc’s teeth therefore not only need to be able to tear the flesh of the wildebeest through death spin but are also strong enough to crush their bones.

Great White Sharks, do not crunch bones but shred flesh from their prey by biting and thrashing it off.  Their serrated teeth are more like a saw than a dagger

Because their teeth are interchangeable, they are not meant to withstand extreme pressure. Behind each visible tooth, they have rows and rows of extra teeth.

In the event that they fall off during a struggle, you’ll be ready to replace them.

The skin of a great white shark cannot withstand a lot of penetrating force. On the other hand, a Saltie’s prehistoric armor looks a bit more weatherproof.

So we have a situation where a Great White Shark has enough jaw size to bite the body of a Saltie but lacks the bite force and the teeth to make it count.

The Saltie has enough bite force and the right teeth to do serious damage to whatever it can put in its mouth, Its mouth, however, is inadequate for a Great White Shark.

The crocodile, in my perspective, has the upper hand!

A Great White Shark without a fin is more likely to die, however, a Saltie can live without a leg.

Bald Eagle vs Great Horned OWL – Who Would Win?