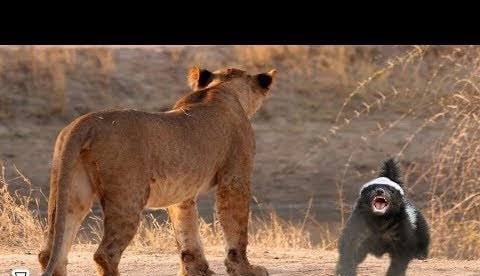 Honey badgers are creatures of the wild, They have adapted so much so that they are capable of defending themselves against apex predators in the wild. They can defend themselves against bees, venomous snakes, Lions, hyenas e. t. c.

Badgers would stop at nothing to eat honey, Going into a bee hive is the badgers hubby, as a matter of that, that’s how it gets it’s name.

These badass creatures will get stunk by countless of bees and still survive.

They have adapted and transform into the badass creatures we know them to be today. That explains why they are so stubborn and dangerous. The badgers have developed thick skin, venoms have little effect on them, They recover quickly after awhile.

It is possible that honey badgers developed thick skin and aggressive behaviour as a result of their love for honey.

Honey badgers oftentimes will go into a bee hive to search for honey, They’ll get stung by thousands of bees and yet still survive, It is believed that Badger have developed immunity resistance to venom hence given them an aggressive survival instinct as a result of his quest and hunt for honey…

One might say, Bee stinks on a badger transformed it into what it is today: the reason why badgers are known to be the most aggressive and badass animals alive.

Can the world’s venomous snake kill the most ferocious animal in the world? Can the venom of an inland Taipan or a Black mamba kill the aggressive and terrifying honey badger?

Honey badgers have thick skin and loose body. This thick skin gives badgers the confident to fight the world’s most venomous snakes in the world head on.

These small ferocious badass creature are skilled in fighting and killing snakes.

Venomous snakes tremble when a badger is close by, a badger sharp claws, jaws and teeth are great weapons it uses to kill snakes with ease.

Can the venom of an inland taipan kill an Honey badger?

There are no records of Badgers killed as a result of snake bites. Although the venom of an inland taipan is potent and lethal. It will definitely have some effects on the badger and weaken it. The badger is sure to recover quickly after some few hours rest of battle. They however, have high metabolism and so you can be sure it’ll be on it’s next hunt to kill another delicious venomous snake again…

This seems laughable as one might find it difficult to believe a small creature can challenge and escape the grasp of something so big and an apex predator at that.

The combined share effort of lion pride can take on any badass, toughest animals in the wild and these include: Hippopotamus, Nile crocodile, Giraffes and sometimes pride their luck on adult elephants, but they have been failures in that department, they can, however, take on baby elephants. Honey Badger – small ferocious badass animal in the world.10 Most Fearless Animals in the wild

Lions, Hyenas, and leopards flee from Badgers because they are not willing to fight with something that strikes back. They sharp claws, jaws and teeth, combined with it’s loose body makes it difficult for apex predators to dominate the situation and kill badgers. Badgers will scratch, bite, claws at lions every single time, leaving the lion bruised and several injured in the process of trying to kill it. Even a pride of Lion oftentimes have trouble killing it because of the ratel aggressive noise it makes.. A very aggressive beasts it is.

Can a Lion kill the Honey Badger

A Lion can most definitely kill Honey badgers, as a matter of fact, Lions have killed them and there are youtube videos that proves that.

The truth of the matter is; An hungry lion won’t care about anything, a badger can’t escape an hungry lion.

Lions will be happy to eat the Honey Badger when hunger sets in, it will have no choice but to endure the scar and bruises from the badger.

The fate of an injured Lion

Lions are smart and so they oftentimes avoid severe injury: An injury in the wild means certain death, an inability to hunt, weakness of the body, flies infestation on open wound, infection sets in, unable to join others to hunt and eventually meets it’s death.

What Animals can kill Honey Badger?

There’s a limit to the Honey Badger’s ability, There are creatures in the wild that will devour her whole, some creatures are even more formidable, more tough and more badass than the Badger.

Hippos have nothing to fear from Badgers because they are bigger, more massive and have bigger jaws, huge canine teeth and Thick skin.

The hippopotamus can devour the ”Badger” whole. An hippo would swallow the badger, chew it and belch (Honey Badger sweet) the hippo would say.

Other Animals that can kill Honey Badgers are.

Can a Hyena tear open the skin of a hippopotamus?

How Golden Eagle is Different from Bald Eagle