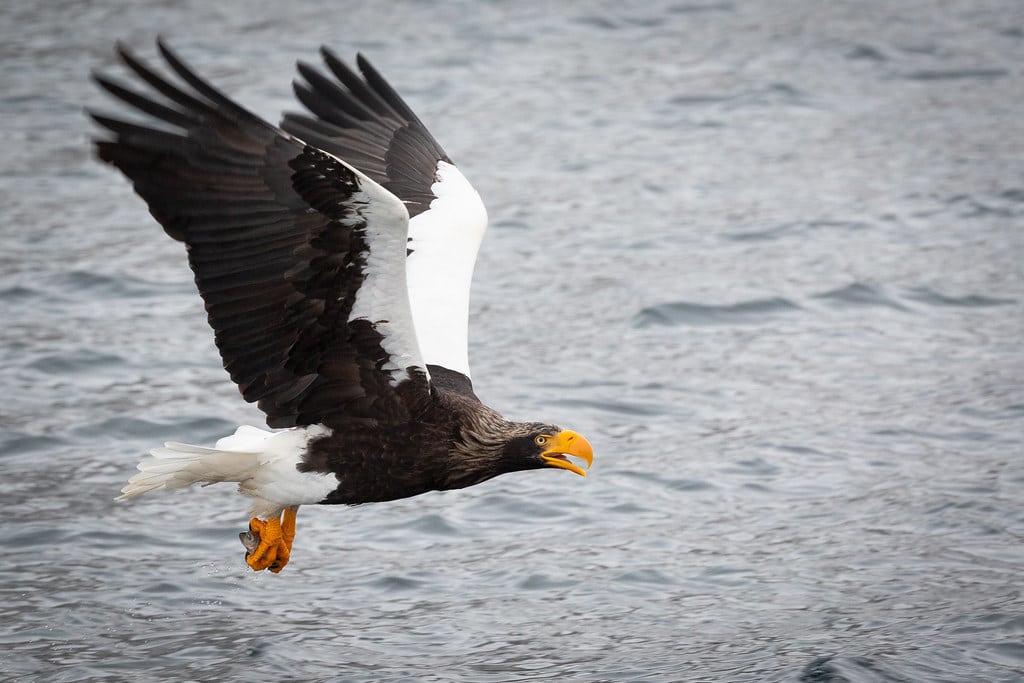 Eagles are the most powerful birds on the planet, capable of hunting a wide range of animals.

They hold firmly to prey with their strong talons and incapacitate their victims.

The eagle will break the victim’s spinal cord with a sharp peck of its beak.

Eagles are natural-born hunters. To survive, they must be able to identify, track, and kill prey.

Juvenile eagles are left to figure out how to hunt on their own.

Eagles do not require any training because hunting is such a strong instinct in them.

The harpy eagle, which was hunting monkeys in the Amazonian forest, had to learn the right way to stealthily approach monkeys without alarming them.

When the harpy eagle was finally successful at capturing and killing its prey, it targeted the monkey’s head, effectively immobilizing it with the first strike.

The eagle was able to swallow the prey without fear of the monkey retaliating.

The element of surprise is key when hunting prey. If an eagle senses they are being hunted, they could run and hide, send alert signals to those around them, or use a defense tactic.

Eagles are able to use the element of surprise when it comes to attacking their prey because they can stalk their prey from very far away.

Eagles will more often than not go for prey that is smaller than them or about the same size.

However, Eagles hunt larger prey such as sheep, pigs, goats, and deer.

They are perfect for sinking into an animal, carrying large loads, and inflicting major damage.

An eagle’s foot is supplied with very powerful toe and leg muscles.

These muscles are what provide the force needed to grip onto a prey that is struggling to escape.

This ability to grip and hold things securely is what makes talons so important and powerful.

The main measure of how much power an eagle has is given by its grip strength. How much pressure can an eagle’s talons inflict?

Eagles can cause serious injuries to their victims inflicting pains of between 400 to 700lbs of pressure per square inch.

The Strength of the Harpy Eagle

A harpy eagle’s talons are almost as long as a bear’s claw, although not as thick.

The talons of an eagle can be so powerful that they can destroy bones like skulls and ribs.

Incapacitating and paralyzing their prey.

The prey is less likely to fight back and struggle if it is mortally wounded.

A talon’s curvature is also important because it must be able to sink into and firmly engage in an animal’s flesh.

The eagle’s talons need to sink deeply into their prey to aid in carrying and lifting. This enables them to carry their prey over long distances in flight.

Eagles need to hold onto their prey because they don’t typically eat it right on the spot.

Many times they carry it back to the safety of their nest where they can eat without worrying about other predators sneaking upon them.

When attacking larger prey, like deer or other hoofed animals, they fly at the animal’s back, talons forward. EAGLE VS VULTURE – Which is more powerful?

The eagle will then grab the animal’s back and ride it until it dies from its injuries.

There you have it! You should definitely be awed by the power eagles possess.

They soar above their prey and attack with sharp, strong talons. Eagles then rip their prey apart and eat everything, bones and all.

They are truly great creatures!

10 Worst Animal Parents in the world