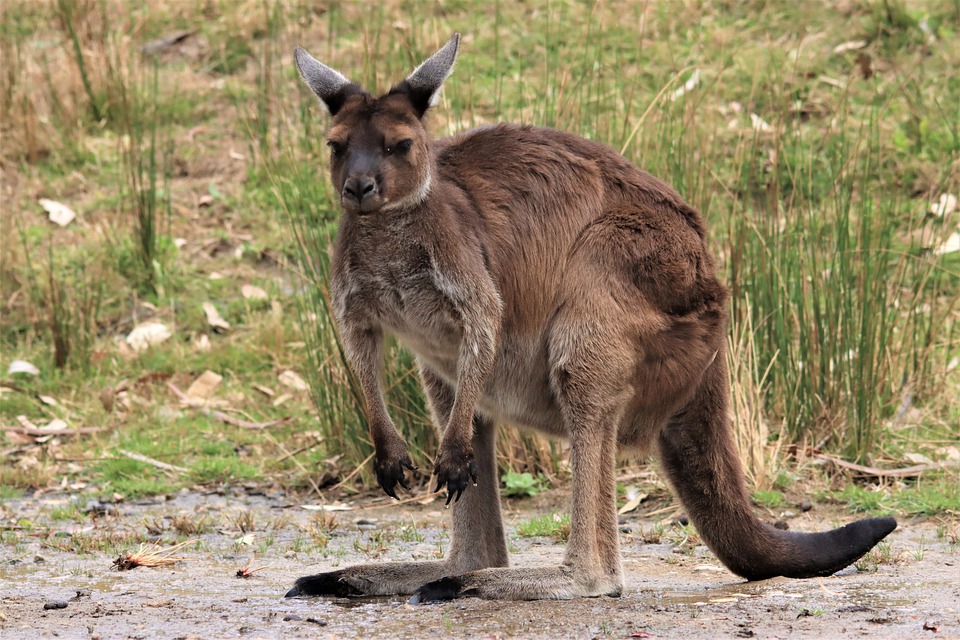 The kangaroo is an Australian icon. Its size, strength, and speed are traits that make it a natural logo or emblem for Australian organizations and sporting clubs. It’s also on the country’s coat of arms.

Kangaroos also represent Australian attributes: “standing up for oneself and not backing down!”

Kangaroos find it difficult to travel backward due to their huge back paws and tail.

However, Adult males compete with one another for higher status within a local group or mob,’ with the dominant male fathering the next generation of joeys.

However, many people regard huge male kangaroos as peaceful grazers. They can, in fact, be aggressive towards other people.

Even if the chances of this happening are extremely remote, we must be vigilant.

If raised in captivity and then released into the wild, it may scratch and bite you to get food.

It may even perceive you like a different animal and begin kicking and scratching you as a type of ‘play fighting’ or to demonstrate its authority.

If confronted, injured, or sick, kangaroos can become aggressive and potentially dangerous.

But how strong is a kangaroo?

Thanks to a bone-shattering kick that generates 759 pounds of strength, a red kangaroo may win the martial-arts belt.

Evolution has nudged wild creatures to hone their blows, bites, and brute strength for survival.

They compete by kicking each other with their strong legs.

Because they have thicker bellies, they are less affected by heavy kicks from others.

Kangaroos can cause serious injury to humans. Mind you, we really are nature’s weaklings when it comes to physical things compared to animals.

They are effective against dogs, drowning or gutting them with their muscular legs and big claws.

When confronted by a more deadly wild animal, like a wolf or cougar, there’s a considerable possibility they’ll be bitten or clawed by the kangaroos.

When attacked by dogs, kangaroos have been known to dive into shallow waters.

If an animal attacks a kangaroo and catches up to it, the kangaroo will grab it with its forearms and pushes it beneath the water, drowning it.

The kangaroo can also use its back legs in the water to rip the stomach of the attacking animal.

Kangaroos can be aggressive if threatened, so it is advisable to stay away from them.

If you want to keep your intestines inside your tummy. When you go bush walking and you come across ‘Skippy’ the friendly Grey Kangaroo.. and you think that you can go up and pat him. Don’t!

Just leave Skippy alone. Skippy is 2m tall, weighs about 100kg and he has an attitude problem when it comes to people wanting to pat him.

Then again Skippy the Grey Kangaroo is still far friendlier than his cousin from Alice Springs. Roger, the Red Kangaroo.

He likes to crush steel cans for fun and if he gets you, he will do the same to you.. you will never outrun Roger.

5 Animals That Could Defeat A Polar Bear