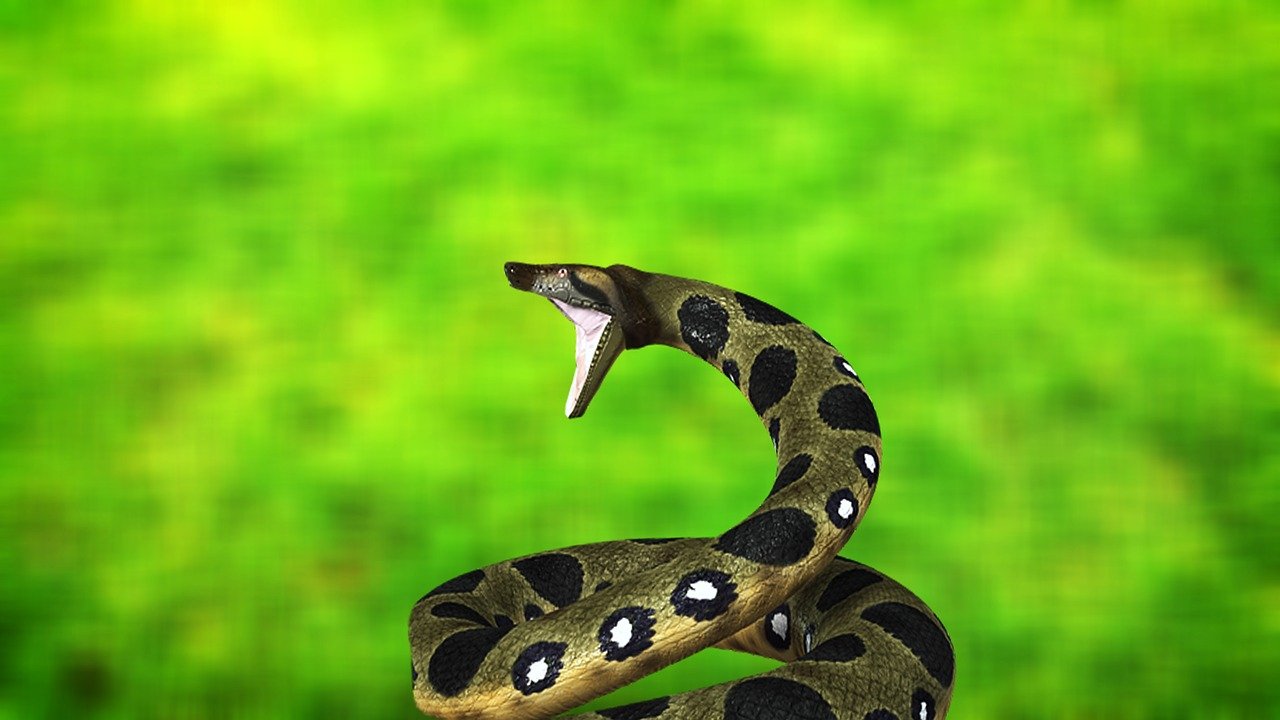 Anacondas are semi-aquatic snakes that can be found in tropical South America, especially in the Amazon, and are different from pythons.

They are among the world’s largest snakes and are recognized for their swimming abilities.

The genus Eunectes, a boa genus, is known by the common name “Anaconda.” In Greek, Eunectes means “excellent swimmer.”

The green anaconda is the world’s heaviest and one of the longest snakes.

Anacondas appear frequently in South American mythology, whether as shapeshifters, the creators of water, vicious human-eaters, or magical, spiritual beings with healing abilities.

How Strong Are Anacondas?

Anacondas are the world’s largest snakes by weight and the most powerful predatory constrictors. Jaguar vs Anaconda

The constriction force of an anaconda is about 90 PSI, which is about equivalent to a 9,000-pound school bus sitting on your chest.

In comparison to other large reptiles like alligators and caimans, anacondas have weak jaws as predatory constrictors.

However, when compared to other snakes, their biting power is impressive, with a bite force of 900 PSI.

Anacondas, on the other hand, do not use their bite force to kill their prey. They kill by suffocating the target and cutting off its blood supply.

However, not all anacondas are as powerful as this one. To generate force, these snakes use their muscular bodies. Thus, the smaller the snake, the lower the force it can exert.

How Strong Is An Anaconda’s Bite?

Although anacondas‘ bites aren’t as strong as those of most apex predators, including mammals and other large reptiles, they are said to have a jaw force of around 900 PSI.

While the bite force of an anaconda has only been estimated based on its jaw anatomy, these snakes rarely utilize their mouths to kill prey.

Anacondas rarely attack humans, and it has been found that these snakes do not inflict life-threatening injuries simply by biting.

While an anaconda’s bite is certainly painful, we can assume that the snake’s small teeth and jaw shape make full-force bites difficult. How to survive being swallowed by an Anaconda

Anacondas, unlike mammals and other reptiles, have flexible jaws. Instead, each of their jaws (lower and upper) is made up of two sides joined by an elastic ligament, with the upper and lower jaw joint pivoting to allow vertical and horizontal rotation.

This morphology enables the snake to independently move either side of its jaw and expand its mouth wide enough to swallow its prey entirely, regardless of its size.

As a result, it’s safe to assume that anacondas can bite with a force of 900 PSI, but their actual bite force is far lower.

What is the speed of Anacondas?

Anacondas slither on the ground like all snakes, but that doesn’t mean they’re slow. On land, they can travel at speeds of up to 5 miles per hour (8 km/h).

Anacondas are also excellent swimmers, capable of reaching speeds of up to 10 miles per hour (16 km/h).

When running, the average person can reach top speeds of roughly 8 miles per hour, which may be your only advantage when confronted with a hungry anaconda.

An anaconda’s land speed is less than that of other apex predators, although it is fast by snake standards.

Anacondas can also move significantly faster in short bursts, striking the victim, latching on to it, and wrapping their body entirely around it in approximately 10 seconds.

How Hard Can an Anaconda Squeeze?

Anacondas may not have the strongest bites, but they certainly have the most powerful squeeze force.

Experts discovered that an anaconda’s constriction force can exceed 90 PSI in a test.

To get a sense of how powerful anacondas are, consider that the average person can endure a squeezing force of roughly 50 PSI if applied gradually and that the average human hand squeeze is about 2.37 PSI.

In truth, an 18-foot python’s squeezing force is only around 14.22 PSI, which is about six times that of a human’s hand squeeze force.

Anaconda vs other snakes

Anacondas, on the other hand, are over six times stronger than pythons.

Pound for pound, the anaconda is the world’s most massive snake, and thus the most powerful of them all.

Indeed, the stocky muscles of this heavyweight constrictor are far thicker than those of any other snake.

Anacondas are clumsy and sluggish on land because of their weight, but their stealth in the water more than compensates for their lack of terrestrial speed.

And that’s why the massive serpents hunt mostly while venturing deep inside their watery domains.

Once it has caught its target, the anaconda will strike, bite it with knife-like teeth, and then wrap its thick, muscular coils around it, encircling and squeezing it hard until the victim dies of suffocation.

Any animal, no matter how large or dangerous, can be eaten: capybaras, agoutis, peccaries, deer, rodents, caimans, jaguars, and so on.

The greater the size, the better. Once death comes, the anaconda goes into eating mode: it swallows its food whole, without leaving any trace, during which it opens its mouth to well over 160 degrees, thanks to two independent articulations that render its jaws so extraordinarily flexible.

SPOTTED HYENA VS STRIPED HYENA – Who Would Win?