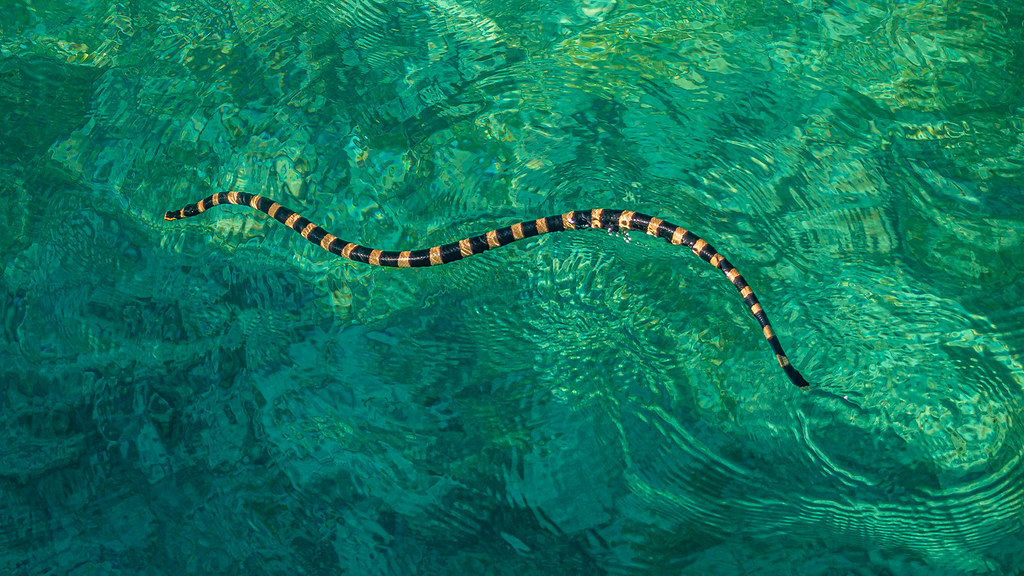 What should you do if you come across a seas snake?

While swimming you encounter a sea and it bit you, what do you do?

All of a sudden you feel pain in your hands and it so happens that the snake runs away.

You can come across sea snakes in places like tropical India and the pacific oceans. you won’t find them in the Atlantic oceans.

A bite from these deadly creatures could be life-threatening.

They have potent venom-containing neurotoxins that can kill humans within a few hours.

Take caution, be familiar with your environments at all times.

If you come across snakes in general, either land snakes or sea snakes, it’s best to stay away. Do not attempt to catch, hold or grab them. They will strike and attack you if threatened.

Snakes have poor eyesight so they can barely see especially during the day. So, if a snake approaches you, don’t scream, back away slowly, and go your way.

The snake will escape if it perceives you’ve left its territory.

Be aware that sea snakes are great swimmers, able to swim back and forth in the water. So if you happen to be in the water. It’s best not to stir the waters, they can sense vibrations and move closer to your direction in order to eliminate the threat.

If you notice a sea snake, slowly and quietly get out of the water.

But what if it bites you?

The venom of sea snakes has the potency to paralyze the muscles of your body. So it’s best to get out of the water immediately it strikes you or else you could drown.

And if you try to suck out the venom, It’ll only make things worse and the venom will take effect more quickly than expected.

In a situation like this – Remove or tear off the cloth around the bite, Apply pressure to it, this will help slow the spread of the venom.

If you don’t have a pressure bandage, tie your torn clothes around the wound and keep it really tight. 10 most venomous spiders in the world

Remove the bandage every 10 minutes and clean the wound so it doesn’t get infected.

Once you’re done, tie the wound up again, do this continuously for 4 to 6 hours.

There are varieties of sea snakes, about 50 species of them and every one of them is venomous.

Ensure to get medical help as soon as you can. The effect of the snake venom usually takes 3 hours

Paralysis, pain in the muscles, and speaking disorder are all symptoms of the bite.

You’ll almost certainly be admitted to the acute care unit and given antivenom.

Every year, thousands of divers and fishermen are attacked by sea snakes.

When hauling nets out of the water, fishermen are frequently bitten.

An incident happened off the coast of Northern Australia that led to the death of a 23-year-old.

This young man was bitten by a sea snake just as he was pulling up a fishnet. within a span of two hours, he was found dead.

Thankfully, this was an uncommon occurrence, as only approximately 3% of bites result in death.

However, a sea snake bite would be unpleasant, so stay clear of them and their habitat.

On land, don’t think you’re much safer. Sea snakes are amphibious, meaning they can shed their skin, breed, and lay eggs on land. How to Survive the Most Vicious Animal Bites

They aren’t the only dangerous snakes that have been known to leave their watery lairs.

Take, for example, the anaconda. You’ll need a lot more than antivenom if one of these animals clamps onto you.

Why is wolverine animal so aggressive?

Honey Badger or Hippopotamus – Which is more Aggressive