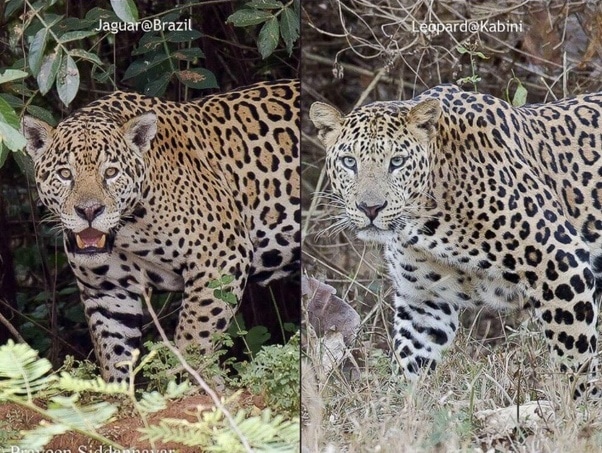 If you have ever thought that a jaguar and a leopard are the same types of animal then you are totally wrong.

In terms of their size, habitat, tactics in hunting for their food, and more.

Yes! They both look quite similar but there are lots of differences to spot in both animals. Firstly they are from the same Genus called Panthera.

From their physical appearance, they are both strong and fast when it comes to chasing their prey.

In terms of their hunting behavior, these two cats differ. Leopards use their speed to hunt for antelopes, and when they get their prey they press their teeth to the throat of their prey causing them to be unable to breathe.

After which they dragged their meal to hidings so as far to avoid their superior predators from trying to steal their hard work. Jaguar vs Leopard

Whereas the jaguars, on the other hand, target and crush the skull of their prey causing them to die on the spot.

Jaguars are often referred to as Aquaman because of their ability to stay and hunt for wet habitats like reptiles. Now we would talk about these two wild cats differently; firstly we would be talking about the.

Jaguars are the third largest in the cat family, they mostly enjoy the company of themselves, so they like living in solitude.

The males are totally in control of their homes and they do everything to protect their homes from predators. Jaguars can run at a speed of 80km per hour.

Jaguars weigh between 56-100kg with a head and a body length of 5ft 6 and 6 inches. Their preferred habitat is tropical forests and swamps.

They usually enjoy swimming and their mode of getting their prey is through the stalk and ambush method.

Jaguars have a compact body, powerful jaw, and wide forehead. Its colors range from black to reddish brown.

Jaguars can be found mostly in Southern and Central America. The life span of jaguars ranges from 12-15years.

Leopards are the fifth largest in the cat family following the cougar. Compared to other cats, leopards have short legs and a long body with a large skull.

Leopards have the ability to adapt to any habitat. Ranging from rainforests to steppe, including arid and montane areas.

Leopards run at a speed of up to 58km per hour the females weigh from 21 to 60kg while the males usually weigh around 36 to 75kg.

Leopards are astoundingly strong and they are by far the strongest of all cats. They have a life span ranging from 12-17 years.

SIMILARITIES AND DIFFERENCE BETWEEN THESE TWO CATS: Jaguar vs Leopard

If you look at their physical appearance, the jaguar is bigger, heavier, and stronger.

From this article, you will find out that the bite force of the jaguar is more powerful and deadly because it pierces through hard surfaces.

However, leopards are more smart and intelligent than jaguars.

Though the leopards climb and relax on tree branches, jaguars also have the ability to climb trees.

Studies have revealed that these two cats are the best pound-to-pound fighters of all cats.

The majority of experts would vote for the jaguar to be the winner of the fight.

Personally from my findings, I believe the jaguar would do better than the leopards because leopards are mostly non-aggressive and sometimes they lose their meals to other predators like lions, hyenas, and others.

So I think the jaguars would win the fight.

Most Venomous Snakes in Nigeria