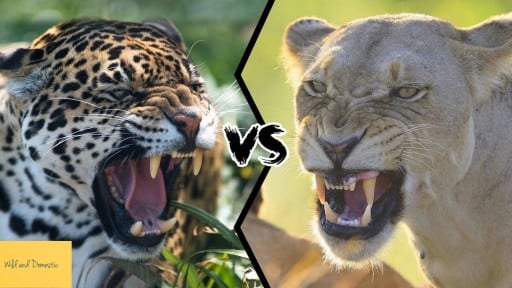 Who would win a fight between these two wildcats?

In the history of the Americans, Jaguar is known as the largest cat.

Jaguar belongs to the family of Felidae in the genus of Panthera onca.

The Jaguar is the new world mammal in this family.

However, it is the third-largest in the world after tiger and lion and in the Western hemisphere, it’s the most powerful feline.

A female lion, the lioness, is a symbol of strength, and rightfully so. And although lions are much more exposed in our culture, the lioness is the real star.

Lioness is a mother, a female, a queen. If female lions decided to turn on the male lion, he’d be in for a fight for his life.

Typical coloration is orange to tan, with black spots arranged in rosettes with a black spot in the center.

Along the midline of the Jaguar’s back is a row of long black spots that may merge into a stripe.

The base color of the jaguar varies greatly from white to black. Although brown and black Jaguars appear to be solid-colored, spots are always faintly visible.

The lioness is a well-muscled cat with a long body, large head, and short legs.

The lioness’s coat is short and varies in color from buff yellow, orange-brown, or silvery-gray to dark brown, with a tuft on the tail tip that is usually darker than the rest of the coat.

Once found here in the United States (California, New Mexico, Arizona, Texas, and Florida ) this cat was hunted to extinction here in the late 1940s.

Today, it is found in Mexico, but swiftly declining and Central America, and the strongest population being found in the Mato Grosso, Brazil;

The Jaguar is commonly found in rainforests, savannah, and swamps but at the northern end of its territory, it may enter the scrub country and even deserts.

The Jaguar still has a stronghold in the Amazon basin but has been nearly wiped out of all drier regions.

Wherever it is found, it requires freshwater as the Jaguar is an excellent swimmer.

African lions once roamed most of Africa and parts of Asia and Europe.

But the species has disappeared from 94% of its historic range and can only be found today in parts of sub-Saharan Africa.

These lions mainly stick to the grasslands, scrubs, or open woodlands where they can more easily hunt their prey, but they can live in most habitats aside from tropical rainforests and deserts.

Asiatic Lions (Panthera Leo persica) is a subspecies of the African lion, but only one very small population survives in India’s Gir Forest.

As you might have guessed just by looking at their massive fangs and muscular bodies, Jaguars are strict carnivores that subsist entirely on the flesh and meat of other animals.

They are fast, stealthy hunters that skillfully ambush and tear apart a variety of animals, from mammals and reptiles of varying sizes to fish and even birds on occasion.

How Strong Are Jaguars?

They will take down just about any animal weak or small enough for them to ambush or incapacitate with ease.

Plus as apex predators, they lack any Predators to speak of. A Jaguar uses its teeth to tear into its unfortunate prey. For jaguars, stealth is the name of the game.

The Jaguar is a solitary creature aside from the first couple of years spent with its mother.

Jaguar males are very territorial their home range overlapping that of several females, but being prepared to defend fiercely from other males.

They are dependent on water, particularly during the dry season, seeking relief from the heat.

They are very good swimmers and are very fast when moving through the water, especially when pursuing their prey.

Near dusk and dawn, Jaguars are most active, tending to rest during the mid-morning and afternoon.

when resting they lie under thick vegetation in deep shade or under large rocks or caves, twenty hours of the African lion’s days will be spent sleeping.

Most of their activity takes place once the sun begins to go down with large amounts of vocalizing and grooming, in the dawn time, they will go out on the hunt.

How Strong Are Lions?

African lions are the only big cats to form groups. These groups are known as pride. They consist of 1 or 2 males, 5 or 6 females, and the cubs. However, some lions live as nomads.

These African lions spend the day roaming around on their own. Lions have a range of vocalizations including snarls, hisses, coughs, miaows, and woofs. The most popular of these is the roar. Lion’s roar is used for advertising their presents.

This call is the loudest of all the big cats and can be heard 8km ( 5 miles) away.

who would win a head-head fight between a Jaguar and a lioness?!

I am going to assume we are discussing a prime male Jaguar against a prime Lioness.

To be clear no one actually knows how this would go because the two species are separated by the Atlantic ocean.

There is no interaction of these magnificent cats In the wild. In my estimation, this is a close match-up, that could go either way.

it is probably the case that it depends on the individual cat and you cannot make a general statement.

pound-for-pound the Jaguar has the advantage. Jaguars are densely packed with muscle and have the most powerful bite of any cat in the world, 1500 PSI compared to the lionesses’ 650 PSI.

They usually kill with skull and spin piercing bites. Their jaws are powerful enough to actually penetrate the thick bone of their prey’s skull and spinal column. Lions prefer to kill by suffocating prey with a bite to the throat.

If the two cats were the same size the jaguar would win almost every fight.

The reality is, however, that on average a female lion is larger. The size difference is not insignificant either. But that difference can be a big difference considering both cats are very lean so the weight is actual muscle and bone, not fat.

Both cats are natural killers with powerful jaws and retractable razor-sharp claws made to tear into flesh.

A male jaguar has much higher levels of testosterone which gives it more aggression, and will to dominate and adds to its power and ferocity.

This can overcome a size advantage but only to a certain degree. So, if the two were equal in weight, the jaguar would definitely win!

So if the two were equal in weight, the jaguar would definitely win!

But if the lioness still had it, she would have a pretty serious chance.

However, even so, the jaguar may have a superior hand, because he is a lone hunter and hunts quite larger animals such as anaconda or alligators, instead, the lioness always hunts in pride, along with her sisters.

Chimpanzee Family vs Hyena pack – who would win?