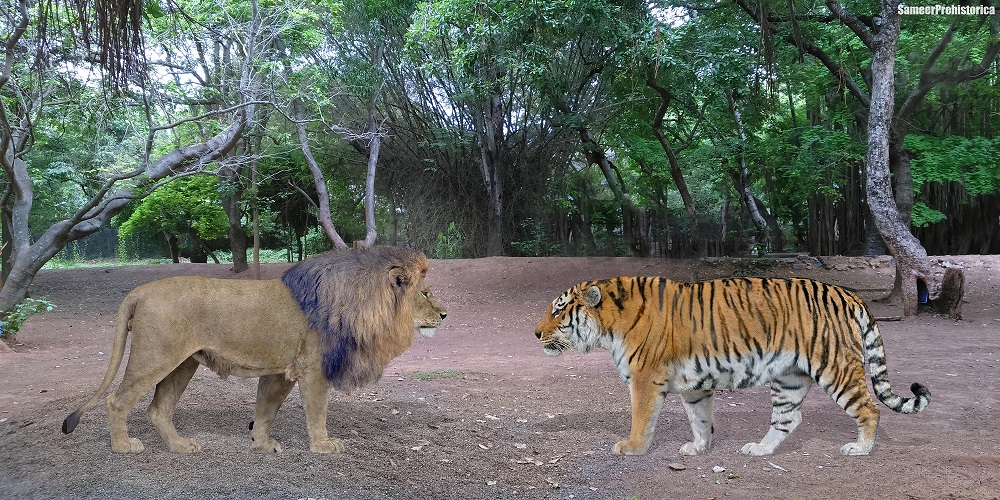 Does lion hunts animals that r bigger, wilder, more aggressive, and more dangerous compared to what the tiger preys on?

Actually, Both tigers and lions hunt larger prey, tigers hunt even larger animals due to their body weight. As you already know tigers are the biggest cat in the animal kingdom. While tigers hunt alone, lions hunt in pride of 6 or more.

Strong teamwork is the reason why lions are always successful in bringing down elephants and giraffes, as also hippos and rhinos. Without teamwork, lions can’t succeed in bringing down big animals

Lions are not always successful in hunting alone and that is why they hunt with pride.

On the other hand, A Tiger is excellent at hunting gaur or Indian bison alone, the largest species of wild cattle.

So, it’s logical that the gaur should be the bigger challenge than the buffalo.

Also, tigers, equipped with their pure strength, size, power, and sophisticated jaws and claws, regularly and flawlessly kill wild water buffalo. Animal in the wild that can kill a tiger

Given the chance, a large tiger may even make a kill out of a fully-grown rhino or hippos – something a whole pride of lions would find difficult to do

Lions working together have a kill rate of around 30% as opposed to a lion working by itself which drops to 25%.

For tigers it is rather more difficult as they only hunt alone unless a Mother is teaching her cubs so you would think the success rate would be much lower than 30%. For tigers it depends on the environment. Lions or Tiger which is better at hunting prey

Tigers hunting boars in Russia have recorded rates as high as 54% while it has been reported to be as low as 10% in India. This may have something to do with the herding animals in India so probably somewhere around 20% is average.

Both of these apex predators are put to shame by the number one on the planet which is the African Wild Dog which has an incredible kill rate of around 85%. By working together and often in relays the dogs keep the prey moving until it reaches exhaustion before moving in for the kill.

But lions and tigers have a huge advantage: they are so big and strong that they can just steal the preys from smaller predators, wild dogs included.

Finally, equipped with pure strength and power, the tiger takes less time to tackle prey even as large as buffalo (around 5 minutes or less!).

while even the lion’s teamwork is not always so helpful against a big game like buffaloes; as a result, lions, with their stiff jaws and rather weak forelimbs, take a whole amount of time when tackling big game (around 10 minutes or more).

I must emphasize that Tigers don’t hunt elephants, they try to kill the man on an elephant, Although Lion pride has been seen attacking baby elephants.

Animals that can kill Hyenas in the wild