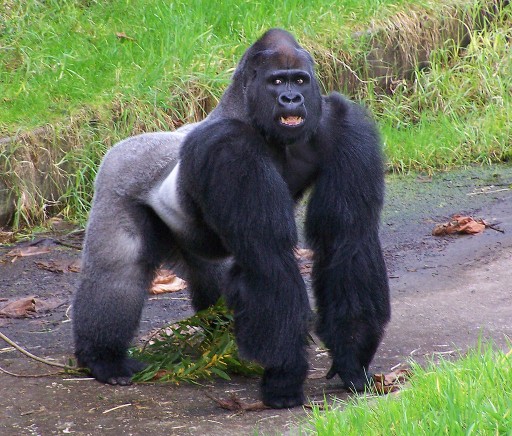 The gorilla is the largest primate in the world.

The discovery that humans share 98.3% of our DNA with gorillas, makes them our closest relatives after chimpanzees and bonobos.

There are two species of gorilla: western and eastern, both with two subspecies.

Today we will compare and see who will win a fight between the two subspecies of the eastern gorilla species.

Grauer’s gorilla, also known as the eastern lowland gorilla, is found only in the Democratic Republic of Congo.

According to recent estimates, there are only approximately 5,000 of them left in the wild, making them an endangered species.

These gorillas are vulnerable to poaching, and they fall victim to the results of civil unrest in their territory.

There are only about a thousand mountain gorillas left in the wild, and half of them are found in the forests of central Africa’s Virunga mountains.

Mountain gorillas are a subspecies of the eastern gorillas (Gorilla beringei).

Read this to learn more about Gorilla

The largest of the four gorilla subspecies is the eastern lowland gorilla, also known as the Grauer’s gorilla.

Like the mountain gorilla, it has a jet black coat, but the hair on its head and body is shorter.

The male’s coat, like that of other gorillas, greys as the animal matures, resulting in the designation “silverback”.

These gorillas can be 5-6 feet tall (1.5 – 1.82 m). They have large heads in comparison to the rest of their bodies, as well as strong jaws and teeth.

A long and thick fur coat, blue-black or brownish-gray in color, which provides insulation against colder temperatures, covers the mountain gorilla’s body.

Both adult males and females exhibit a bony crest at the top of their skulls (the female’s crest is not as dramatic as that of her male counterpart), giving a conical shape to their large heads.

The mountain gorilla’s countenance is completed by a flat nose with wide nostrils that, like the facial skin above its mouth, remains free from the great ape’s encroaching hirsuteness. Its broad chest, hands, and feet are also free of body hair.

The Democratic Republic of the Congo’s eastern region is home to the Grauer’s gorilla (DRC).

They thrive in the lowlands and jungles of the tropics. Over the past few decades, their range has drastically decreased.

Many national parks cover Eastern lowland gorilla habitats, such as the Kahuzi-Biega National Park and the Maiko National Park.

There are also a few wildlife reserves dedicated to preserving gorilla habitats.

More than half the population of our world’s mountain gorillas reside high in the lush, dense cloud forests of the Virunga Mountains, a dormant volcanic range in central Africa that spans the borders of Rwanda, Uganda, and the Democratic Republic of the Congo.

The remainder of this population lives 15 mi (24 km) north in Bwindi Impenetrable National Park, which encompasses southern Uganda and adjoining areas of the Congo.

Habitat destruction and fragmentation have confined both populations of mountain gorillas to isolated patches of forest.

Eastern lowland gorillas are omnivores, enjoying both a plant-based and an insect-based diet.

However, they also eat berries, leaves, and nuts in addition to fruits.

The Eastern lowland gorilla prefers termites and ants above other insects.

These gorillas occasionally hunt for tiny rodents or lizards. In search of food, they have been known to travel great distances.

They can eat fibrous and tough vegetation thanks to their strong jaws.

Additionally, they hardly ever directly drink water because most of the water they take in comes from the plants they eat.

About 18kg, or 40lbs, of food, must be consumed daily by adult gorillas.

Less than 1 percent of its diet comes from insects. Adult males consume up to 75 lb (34 kg) a day.

Elevation varies the type of vegetation that the two subspecies eat. Weather is another influencer on mountain gorillas’ diet.

During the rainy season, Virunga gorillas frequent bamboo forests, where they are able to find young shoots to snack on.

Gorillas get their daily water requirement through the plants they eat.

Gorillas are social animals, and the Eastern lowland gorilla is no exception.

The distribution of gorillas is in tight-knit family groups called troops or bands.

Together, these troops move, eat, and raise their young. A huge male gorilla known as the silverback commands the troops.

They may also include a few subordinate male gorillas in addition to two or three female gorillas and they’re young.

Although the troops are often small, scientists have found groupings of up to 30 members.

Two silverback leaders in a group are uncommon.

Contrary to popular belief, gorillas spend most of their time eating and are not territorial or aggressive animals.

Mountain gorillas are tremendously social and live in groups of two to 40 led by the silverback, a dominant male that is the chief leader and protector.

The majority of males leave their biological groups around 11 years old.

Some move alone and others travel with other males for a few years until they attract females to join them.

The female usually gives birth when she turns 10 and has offspring every four or more years.

Read this for more information about gorilla strength

Now it’s time for the fight, so let’s find out, who would win between a lowland gorilla and a mountain gorilla.

Given that they have a very similar appearance, the differences between mountain and eastern lowland gorillas are interesting.

Remember that they are all members of the Eastern gorilla subspecies.

Mountain gorillas live in regions that are thought to be at higher altitudes than Grauer’s gorillas typically do.

It is important to point out that Eastern Lowland gorillas are generally large in size compared to mountain gorillas.

The arms and jaws of mountain gorillas are shorter.

The Western lowland gorilla is a calm, non-aggressive creature that won’t attack unless challenged.

Competition for the leader of the troop and the chance to mate with females generally leads to fights inside the group.

Despite being a timid and gentle species, mountain gorilla females frequently build close bonds with the group’s males in order to secure protection from predators and prevent infanticide.

The strongest and most dominating silverback in both gorilla subspecies serves as the group’s leader.

There may be more than one silverback in a group of mountain gorillas.

Polar Bear clash in epic battle with the fiercest animals

How strong is a Tiger compared to Lion, Jaguar and Leopards