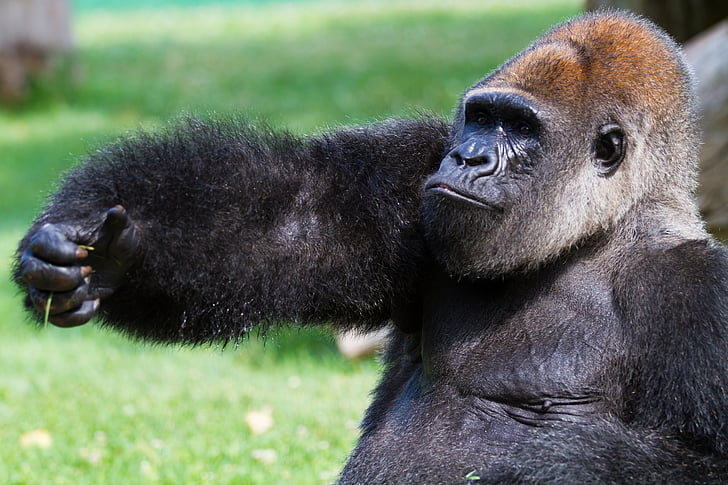 Gorillas are one of the most fascinating animals in the wild. They are known for their intelligence, social behavior, and gentle nature.

They live in groups called troops, which are led by a dominant male known as a silverback.

They are primarily found in the forests of Africa, where they spend most of their time foraging for food and building nests to sleep in.

However, gorillas are not invincible and face many threats in their natural habitat. In this article, we will take a look at the animals and human activities that pose a threat to gorillas and their survival.

Gorillas have natural predators such as crocodiles, leopards, and snakes, but these animals are not known to pose a significant threat to gorillas.

Adult gorillas are large and powerful animals, and they can use their strength and size to intimidate predators.

Additionally, gorillas have sharp teeth and claws that they can use to defend themselves if necessary.

Leopards and crocodiles can prey on young gorillas, and gorillas are known to protect their young by forming a protective circle around them when threatened.

Gorillas have developed unique defense mechanisms to protect themselves from these predators.

For example, gorillas use their strength and size to intimidate predators, and they will also use their sharp teeth and claws to defend themselves if necessary.

Diseases and illnesses are another threat to gorillas in the wild. They can be affected by diseases such as Ebola and yellow fever, which can be transmitted through contact with infected animals or humans.

Gorillas can also be affected by illnesses such as respiratory infections and parasitic infections, which can weaken their immune system and make them more susceptible to other diseases.

Habitat loss and changes in food sources are also a threat to gorillas. As human populations continue to grow, gorillas are losing their natural habitat to activities such as logging, mining, and agriculture.

This can make it difficult for gorillas to find food and shelter, leading to a decline in their population.

Hunting and poaching are significant threats to gorillas. They are often hunted for their meat, which is considered a delicacy in some parts of Africa.

Gorillas are also poached for their body parts, which are used in traditional medicine and as souvenirs.

Human activities such as logging, mining, and agriculture are also a threat to gorillas and their habitats.

These activities can lead to the destruction of the forests where gorillas live, making it difficult for them to find food and shelter.

Additionally, the expansion of human settlements can lead to the displacement of gorillas, resulting in a decline in their population.

Disease transmission from humans to gorillas is also a significant threat. Gorillas can contract diseases such as tuberculosis and influenza from humans, which can be fatal to them.

This is particularly concerning, as gorillas have no immunity to human diseases.

Additionally, efforts are being made to protect gorillas from habitat loss by creating protected areas and promoting sustainable development practices.

Gorillas play a vital role in the balance of their ecosystems, and the loss of gorillas can lead to a decline in the populations of other animals and plants.

In conclusion, gorillas face many threats in the wild, including natural predators, diseases and illnesses, habitat loss, and human activities

Surviving Against the Odds: The Badass Animals that Thrive in the Harshest Environments