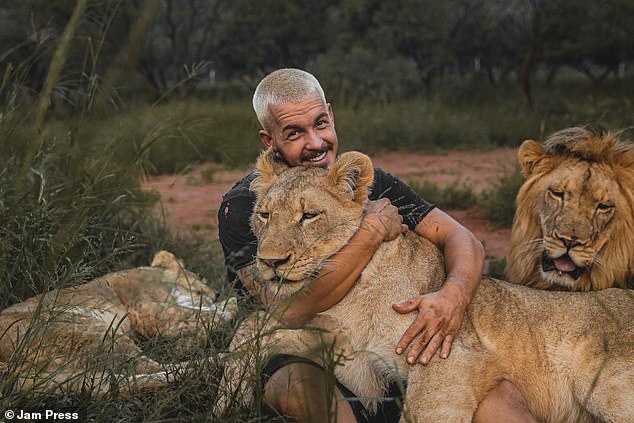 Meet Dean Schneider, The Man Who Plays with Lions(Videos)

How Dean Schneider became part of the Lion Pride

Dean Schneider was in the midst of Lions while he was narrating and telling us how he became part of a Lion’s pride. Why are lions so strong

He said A lot of people asked him how he was able to become part of a Lion’s pride. how could he be so close to them in all situations?

He’s always with them while the Lions are hunting, sleeping, and fighting, even when there are bloodstains in their mouth.

He said, In the world of Lions 90% is body language and only 10% is communication through vocalism, through sounds, etc. Why do lions live in Pride?

Every movement of a Lion’s head, his paws, tails are all communications. You have to be able to read everybody’s language of a Lion or else you’ll find yourself in very big trouble.

In a Lion’s world, there’s a huge difference between being respected and being accepted by a lion and his environment and being part of his pride. The ability to communicate a lion’s language takes years and years of learning, adapting, and understanding…The Life of Lion’s in the wild

Dean Schneider says when he’s with his lions, He forgets about being human, he has to think like a lion, and act like a Lion in every single situation.

Respect is essential in a Lion’s pride, they give each other the privacy they need, and sometimes they lay on top of one another, they are very social animals which means they love affection and cuddling. why is the lion king of the savannah?

There are moments when they just want to be left alone and so you must respect their privacy. But, once you don’t follow their rules, It’ll get rough and nasty very quickly.

There are times when Dean Schneider gives them a knock on the nose letting them know that he’s not in the mood, surprisingly the lions obey and behave themselves.

He said and I quote “ She can’t enter my world, my privacy, and just take over everything.

Dean says, there are times when they start to communicate straight away through body language, certain movements which signify that you should step away, if you fail to heed the warning, you’ll get clawed, and beaten.

There are times when the Lions start using their claws on dean but it’s accidentally most times cause they don’t have control over their back claws.

But when they use their front claws on Dean, they want to see your reaction, they want to know who’s dominating who, In such instances, Dean gives them a knock on the face and sometimes on the nose.

You Might be wondering how the cameraman is able to get so close to the lions as well.

Dean and the cameraman knew the Lions since they were a small age, he grew up with them, and that is why he’s able to socialize with them and be close with them.

They consider Dean part of their pride. It’s a relationship built over 2 years of time, intense work every single day when it’s raining when it’s sunny, and at nightfall, the dean spends quality time with them getting to know them and relating with them.

How strong is a Gorilla?