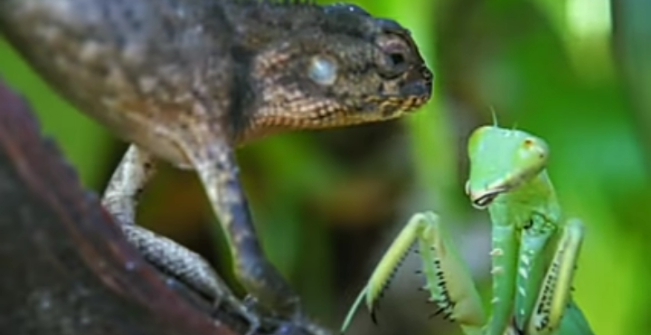 Praying Mantis are considered spiritual insects and that’s because of how their forelegs are clasped together in a “Praying manner”.

Out of 2000 species, 18 are native to the North American continent. Most praying mantis belong to the order Mantodea, which is also their scientific name. About 80% of them are Mantidae.

Most if not all Praying Mantis found in the USA are Exotic species. They were introduced into the United States several years ago. For example, (Tenodera ardifolia) – The Chinese Preying Mantis was introduced near Philadelphia 80 years ago.  Tenodera was about 100mm in length.

There’s also the European Preying Mantis,( Mantis religiosa), significantly smaller in size than Tenodera – About half its size, but religiosa is pale green in color.

The European Mantis was introduced in New York near Rochester about 100 years ago. And that is why Tenodera and religiosa are common in the northeastern United States.

What do Preying mantis eat?

Birds, snakes, lizards, beetles and insects will be eaten alive by the Praying Mantis.

Have you ever heard of an insect-killing a bird? once again an insect killed a bird.

They can kill not only the representatives of their species but also birds, and snakes and can even engage in a fight with a cat.

All these animals usually get into the menu of mantis. However, mantises also eat their own kind too, the most famous example is the infamous mating behavior of the adult female who sometimes eats her mate right after or even during mating.

Praying mantis can also attack and eat snakes now we’re not talking about anacondas, but mantis does attack small snakes and do it in a very specific way.

Mice are also on the menu of the mantis – even if these mice were the size of the mantis it still wouldn’t be a dangerous opponent.

As a result of their veracity, the mantis is sometimes used as a natural remedy for pest control. If there’s a mice or cockroaches invasion in your home all you have to do is get a Praying Mantis.

Praying mantis also preys on fish, they eat amphibians like frogs too.

However, because predators eat indiscriminately they can eat as many good beetles as bad ones. And so, there’s a very thin line between the extermination of pests where there’s none left and a full garden of mantis.

What makes mantises so fearless, aggressive, and bloodthirsty?

Usually, the food chain looks quite logical and understandable, well you know, cats hunt mice, and lizards eat insects but that’s not the case with the mantis.

Its best defense is an attack and not just a short attack. The Praying mantis will attack a lizard, with its powerful front legs, it will squeeze the head of the lizard not letting it close its jaws and the mantis will begin to feed on it.

Once the Mantis has subdue the prey, it will start eating the it alive.

It’s amazing how a mantis can catch a lizard and twist its neck. They are definitely the rulers of the insect world – using their deadly front legs which they usually keep clasped together.

The mantis sets up an ambush merging with the leaves or tree bark to attack unexpectedly with their front legs.

They catch the prey at such a speed that their movement is difficult to track with a human eye and the very structure of the body of the mantis is such that it makes the insect an ideal killer they have triangular heads located on a long neck or elongated chest they have everything to comfortably reach for the prey.

The mantis can rotate its head 180 degrees to scan the environment with two large complex eyes and three other simple ones located between them, the whole set – not a single movement around will go unnoticed.

It’s powerful grip four legs are covered with spikes, the mantis keeps its prey in place and it doesn’t care about the size of its prey.

There are studies that corroborate Mantids evading bats and are quite good at it. While evading bats, Mantids will oftentimes stop, drop, and roll while in midair. Cleverly fleeing away from hungry predators.

It is important to note that not all mantis have ears, in which case they are flightless.!

As I said before, mantis aren’t the type of predators who chase their prey like lions on the savannah – most often they attack from an ambush, some of the mantis are well camouflaged while others expect to stay still until their prey appears or until it gets too close.

Do you remember the mantis from the kung fu panda?

The scriptwriters chose such a hero intentionally.

They developed independently of each other and even look different, however, they wouldn’t refer to mantis to create martial arts if these insects only knew how to attack.

They also have a good understanding of defense if a potential predator approaches, the mantis usually gets up and spreads its front legs and wings to seem bigger, some species also have patterns on the exoskeleton in order to scare away enemies.

If intimidating tactics don’t work, the mantis may hit or pinch the predator with its front legs, it can even bite.

Although its jaws are small they are sharp enough to hurt many enemies.

In addition, the mantis also knows how to make hissing sounds, pushing air out of the abdominal airways and it doesn’t matter what kind of enemy is in front of it.

A bird that’s going to have lunch or a too curious cat the mantis isn’t afraid of anyone.

There’s an underwater brother of the mantis – The mantis shrimp, this creature is larger and can reach 30 centimeters in length against 10 centimeters for an ordinary mantis but it’s just as fearless.

The name mantis was attributed to the shrimp for the ability to instantly throw their front limbs attacking the enemy or prey.

It’s said that this shrimp hits 50 times faster than its terrestrial brother and its formidable weapon is the second pair of limb jaws which are covered with thorns and they’re sharp as a razor.

They pierce into the body until the prey stops resisting – this is bad for fish, shrimps, cuttlefish, and shellfish since the mantis shrimp can be larger than ordinary mantis, and sometimes it chooses a very large rival.

For example, there was a video of an octopus – which took it for easy prey and the underwater mantis strikes the octopus again and again until it retreats.

What have we learned so far? Don’t mess with a Mantis…! Any Mantis for that matter.