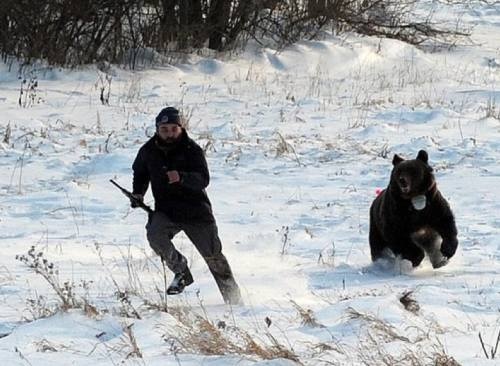 Why is it a bad idea to run from a bear?

It’s a bad idea to run from any predator. Even from dogs, an animal which has lived with humans for over 15,000 years you should still never run from them if confronted.

There are a few reasons for this;

Related: Watch as Grizzly bears defeats Tiger in a fight

Firstly, they are almost definitely faster than you. Bears, despite weighing anywhere from 150 kg to 700 kg can run 30–40 mph depending on the type of bear in question. That’s pretty fast.

Secondly, if you’re confronted with a bear (depending on the type) it is just as scared of you as you are of it. Literally. Brown and black bears are absolutely terrified of humans and would mostly avoid us all together.

Sure, there’s some examples of bears coming close to humans, but usually, if they see you from a distance, odds are they’ll just retreat in silence.

Thirdly, if you run, they will chase you. Running from any predator, including dogs, will trigger this predatory instinct they all have.

They’ll immediately lose all fear of you and look at you as a prey.

I don’t know how true this next part is, but I’ll say it anyway. When I was in school I had to write paper on bears. While doing some research, I came across a poem.

‘If it’s black, fight back. If it’s brown, back down. If it’s white, say goodnight.’

After reading this, I was curious so I did a bit more research. Apparently, despite black bears very rarely attacking, in the instances where they do attack, they do it to neutralise a threat.

They’re terrified, and the best way to get away from you is to kill you basically.

The best way for you to get away from them? Fight back with everything you’ve got.

Now, whether you live or die, you’re going to lose the fight. It’s a bear. But the idea is to do enough to scare the bear, or at least convince it you’re not worth the hassle.

And when I say fight back, I mean FIGHT BACK. You need to do everything you can, kick him in the balls, stick your finger in its eyes, punch him on the nose. e.t.c Reasons why you should never run away bears

For brown bears, we were told to back down, and that’s true I guess. Brown bears are more territorial than black bears. Mothers are also extremely protective over their cubs.

If confronted by one, your best bet is to avoid eye contact, but still look at them. Stare at their legs so you still know what they’re doing and where they’re moving to, but don’t look into their eyes. Back away slowly, don’t turn your back and you should be ok.

It’s hard to keep your cool when confronted by a bear, but if you can then your odds of survival go up massively.

If it does attack you, then your best bet is to collapse to the floor in a ball, interlock your fingers round the back of your neck and just lay there. Let the bear throw you around for a bit and hopefully it will see you’re not a threat and be on its way.

If however, the aggression lasts a bit too long, then it’s time to fight back. Same story with the black bear, eye gouge, ball kicks, snout punches, only this time it’s going to be MUCH harder, considering the fact that the bear in question is probably about 200 kg heavier than the previous. Good luck, I guess. Reasons why you should never run away bears

As for polar bears? Well, these bastards are different.. REAL different. The thing is, black and brown bears have evolved to have this natural fear of humans, because we pretty much kill anything that gets in our way.

Polar bears, living in a pretty isolated part of the world, they live in the arctic which is pretty much as ‘north pole’. Haven’t really encountered humans as much as their slightly smaller cousins.

Because of this, they have no natural fear of us, which also means that they will see you as a delicious meal more often than not.

They’re bigger, stronger and much more aggressive. You’re pretty much doomed from the start, hence the whole ‘say goodnight’ joke in that poem, but hey you might as well give it your best shot and fight back, right? All I’ll say is, best of luck my friend. We’ll miss ya.

Plus, black and brown bears are omnivores and when they kill prey it’s usually fairly small, like salmon or a nest of baby birds. Polar bears are pretty much pure carnivores because where they live meat is all there is for most of the year, and they hunt human-sized seals, so they see human-sized objects as prey.