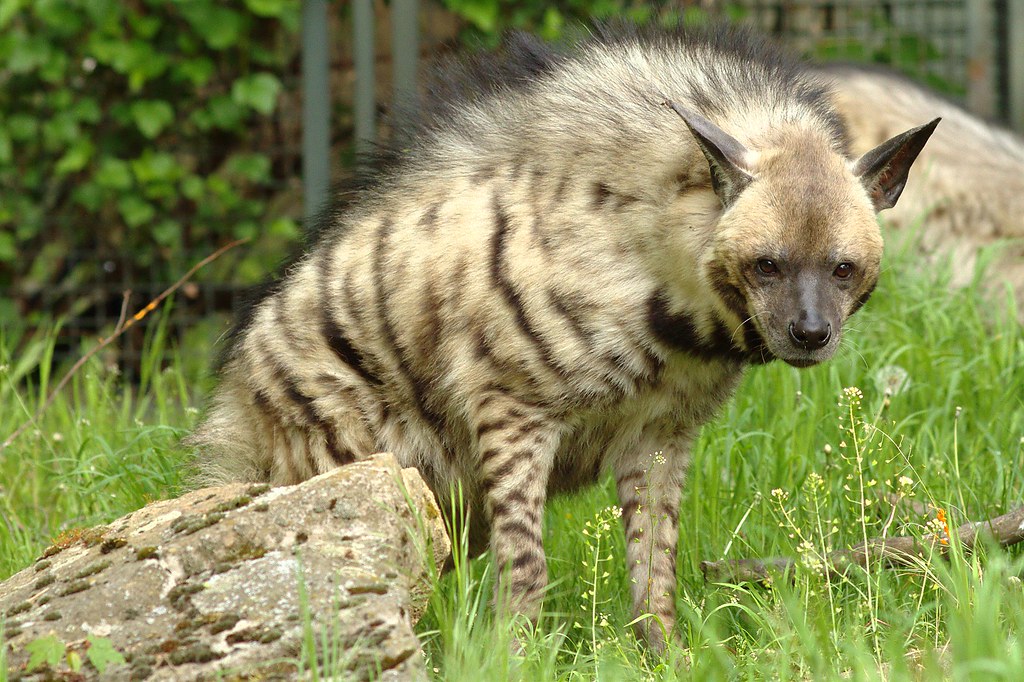 Spotted Hyena vs Striped Hyena- Who is the stronger of these two predators in Africa?

There are numerous myths regarding hyenas. They’re not simply scavengers. Not all of them laugh. They’re not wild dogs. They have nothing to do with dogs.

The Spotted Hyena is the largest of the hyena family which also includes the brown hyena, the striped hyena, and the aardwolf.

So you think you know everything there is to know about spotted hyenas, the ones that are known to “laugh”?

They appear in a variety of cartoons and movies, usually as giggling villains.

The spotted hyena may look like a dog, although it is more closely related to cats, civets, and genets.

The striped hyena is a subspecies of hyena.

This hyena belongs to the Hyaenidae family and is distinguished from other hyenas by a number of morphological characteristics,

including its unique vertical stripes and pointy ears.

At first look, the spotted hyena may appear strange.

The hyena has a huge head, a long, thick, muscular neck, and powerful jaws that give it one of the most powerful bites.

The hyena has a profile similar to that of a wildebeest because its front legs are longer than its back legs.

The paws of the spotted hyena have four toes and non-retractable claws. The short, coarse fur has a yellow or gray color with markings.

Its ears are more rounded than that of the other hyenas. A short mane of hair along its back stands upright.

Compared to spotted hyenas, striped hyenas are a little smaller. A big head with dark eyes, a thick nose, and large, pointed ears define them.

They have a black muzzle, ears, and throat, but their coat can be golden yellow, brown, or gray with black stripes on the body and legs.

A mane of long hair grows along the back. The legs of the hyena are the most prominent feature: the front legs are much longer than the hind legs.

Spotted hyenas are found from Sub-Saharan Africa to northern South Africa, except for rainforest areas.

They may live in savannas, wetlands, semi-arid places, and even highland forest habitats.

Adult spotted hyenas sleep in holes or shallow pools, under bushes or scrubs, or anywhere else they may find shade during the day, rather than in dens.

Some individuals prefer keeping it as a pet. Africa, West India, the Middle East, and the Arabian Peninsula are the most common locations for these scavenging creatures.

Family groups have been reported to live in dens, which are typically caves with narrow entrances. Large stones can also be found in these caves.

The burrows where these creatures dwell with their family groups can be 4 to 5 meters long.

Although spotted hyenas have a reputation for being mostly scavengers, this is not the truth.

According to research done in the Kalahari, direct kills made about 70% of the diet.

Clans are usually divided into hunting groups of two to five hunters, though zebra are hunted in bigger groups.

It frequently follows its prey across long distances, reaching speeds of up to 37 mph (60 km/h).

They prey on smaller animals like hares, foxes, and jackals while hunting alone.

They hunt medium to big hoofed mammals such as zebra, wildebeest, Thompson’s gazelle, and impala in packs. They also eat eggs, fruit, and invertebrates.

They regularly scavenge carrion and the remains of another animal kill. They eat and smash bones with their powerful teeth.

Hyenas can digest pieces of prey that other animals can’t. Hooves, horns, hair, and ligaments are regurgitated and turned into pellets.

All females are dominant over all men, and females live their entire lives in their natal clan. When males achieve sexual maturity, they disperse.

When a male joins another clan, he joins a dominance queue that is respected by the other men. Males spend a lot of time developing relationships with the clan’s ladies.

Despite the fact that spotted hyenas live in clans, they are only seen together in three situations: at kills, when defending territory, and at a communal burrow.

Breeding occurs between the ages of 11 and 21 months at any time of the year. 1-3 cubs are born inside a birthing den after a four-month gestation period.

Although the striped hyena is normally considered to be solitary, it does have some social organization. It hunts on its own and is rarely observed in groups.

It does, however, congregate around the den in small family groups. Immature family members will carry food back to the den to help feed younger siblings.

Vocal communication is not highly developed. Territoriality isn’t a dominant element of striped hyena behavior, although it does exist.

Because dens are frequently used for short periods of time, they are rarely needed to be protected.

They keep a safe distance from larger, carnivorous predators like lions and tigers, usually around 164 feet (50 meters).

They also have the ability to chase or keep leopards and cheetahs away from food sources.

In a battle between these two species of hyenas, who will win? Spotted Hyena or Striped Hyena?

While both of them are different varieties of the same animal, the striped hyenas are a bit smaller than the spotted hyenas.

The striped hyena’s home range is less than that of the spotted hyena. However, they can certainly meet each other. There are a few behavioral distinctions as well.

The striped hyenas like to live alone or in pairs. Striped hyenas are quieter and less aggressive than other hyenas.

In addition, unlike spotted hyenas, striped hyenas are known to scavenge for food rather than hunt.

But, the striped hyena behaves submissively towards the larger spotted hyena, Spotted Hyenas, and will allow spotted hyenas to steal its food.

Because the spotted hyena is larger, more predatory, and more aggressive than the striped hyena, it is the more dangerous of the two species.

After successfully catching prey, spotted hyenas usually fight with other powerful animals like lions for prey.

Striped hyenas are more omnivorous than spotted hyenas, eating insects, reptiles, and fruit as staples of their diet, and they do not compete for food with other predators.

In times of plenty, they can tolerate each other and even share food.

But in lean or difficult times they compete against each other, and it is clear that the spotted hyena will win this fight!

Why Orcas Are One Of The Smartest Animals on Earth