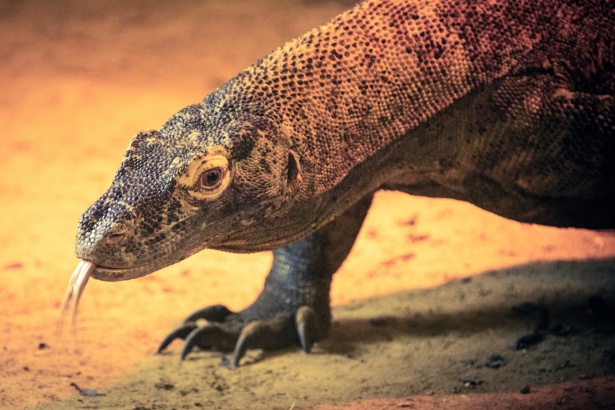 Monitor lizards and king cobra snakes are not exactly pets for everyone.

They are very sticky, huge, and, what’s most important, venomous creatures, so it is not the best choice for you if you want to cuddle one of them.

But, what is funny about these creepy crawling creatures is that they do not like each other. And they have good reasons for that.

Now, let’s take a closer look at monitor lizards, king cobras, and their not-so-kind relationship. Let’s get to it!

What are monitor lizards?

This is a family of huge lizards from the genus named Varanus. Depending on the species, these lizards can really vary in size.

Some smaller in size like the Dampier Peninsula, monitor lizards can grow to be only about 7.87 inches (20 cm) long.

The biggest monitor lizard is, of course, Komodo Dragon, the enormous reptile that can grow to be about 10 feet (3 meters) long.

Also, let’s not forget about the grandest lizard that ever existed, a marvelous Australian Megalania who is a monitor lizard and a close relative to Komodo Dragons.

This gigantic reptile Komodo Dragon could reach 23 feet (7 m) in length, and even though Australia was full of huge beasts in the past, they still do. 6 Animals that can kill a komodo dragon

Lizard monitors live everywhere around Africa, South and East Asia, and Oceania, which is a much wider habitat than the king cobras.

For example, they can only run at a speed up to 12.5 mph (20 km/h), which is much slower than humans, but what the monitor lizards lack in speed they have in wit.

These creatures are some of the smartest reptiles that exist.

They are very skilled predators and usually very successful in their hunts because of their smart tactics.

The monitor lizards don’t blink really often, and it is believed that monitors have really good sight.

Even though these lizards are reptiles and cold-blooded, monitor lizards have a nice metabolism, comparable to mammals.

Almost all of the members of this family are believed to possess some kind of venom in their mouths, and they can be immune to some types of venom as well.

In addition to that, most of the big monitors are incredibly strong, have big strong jaws, and hunt very smartly thanks to their wit.

Now it’s time to talk about the king cobras.

The Latin name of this creature, Ophiophagus hannah means “snake-eating,” where the “Hannah” part is the name of the nymph of Greek mythology.

As you may guess, king cobras are not fans of other crawling relatives and mainly hunt on them instead of being with them. They even eat each other, for crying out loud!

This snake is endemic to jungles in Southern and Southeast Asia. Even though it is a cobra, the king cobra is the only member of its genus Ophiophagus.

It differs from other cobra species drastically, especially in scale patterns.

They also can be very hefty, up to 22 lbs (10 kg), with female cobras much smaller than their male counterparts.

But it doesn’t mean that king cobras can’t give you something special! You don’t name something “king” if it doesn’t possess royal qualities.

The most royal quality of these beautiful snakes we can identify is their very, extremely dangerous venom.

The king cobra has one of the most lethal venom doses in the world, and its bite paralyzes the prey, provokes huge amounts of pain, and is almost entirely deadly.

It can bite without putting venom to use, but it happens rarely.

The species is considered not to be aggressive, and it rarely attacks other than in self-defense unless you come really close to it.

It’s very nice of them, considering the really dangerous venom they have!

Monitor lizards vs king cobras Fight to the Death

So now we know everything about these two species, and it’s time to look at their rivalry.

Interestingly enough, even though most snakes do love hunting lizards, including monitors, the king cobra is not a huge fan of this activity. How To Survive A Komodo Dragon Attack

And in this situation, monitor lizards are the ones who can and will attack poor, highly venomous creatures to feast on their cold-blooded bodies.

There are documented cases when Asian water monitors attacked and killed cobras.

You see monitors kill with a bite on the neck of potential prey, so a much faster monitor can easily chase a king cobra.

In a fight, if we talk about a collision between adult monitor lizards and king cobra, I bet the monitor will probably win.

Asian monitors are the ones that live near king cobras, adult ones can grow to be up to 10 feet (3 m), and they weigh about 42 lbs (19 kg), so you can assume that this monster can win thanks to its wit, speed, and size.

Komodo Dragon has a huge advantage that gives them the ability to laugh at the biggest king cobras approaching it.

Their advantage lies in their very thick scales which are too much for the king cobra to bite into.

As for the snake, its soft body does not have this protective system, and, unfortunately, the snake will fall in a fight with Komodo Dragon.

But there are cases when the king cobra will be the winner over the monitor lizard, and it will feast on it with pleasure.

It can happen if a big adult king cobra finds a monitor lizard child or when we talk about smaller species.

But as I already mentioned, fights between these two grand species rarely happen since they have two different habitats.

Monitor lizards are usually too big and too hard to catch for these snakes, and since they do prefer other snakes over lizards, the king cobra would probably crawl away from the Asian water monitor or Komodo Dragon!

As for the lizards, they can find less venomous prey or even carrion and don’t involve themselves in useless fights. After all, it’s so not lizard of them!

In September of 2021, the video of a monitor lizard and a king cobra fighting was all over the internet.

They fought for about ten minutes before understanding that they just couldn’t beat each other, and in the end, they just went different ways.

Even though the lizard was bitten, it seemed to be okay. The snake was fine too.

So as you see, these two fellas are pretty similar in strength, but if I had to take a bet, I would rather put it on the monitor lizard: The king cobra just doesn’t have enough teeth to kill it.

So how did you like this story? Did you find out something new about monitor lizards and king cobras?

Leopard Seal vs Sea Lion – Which is more powerful

COYOTE VS DINGO – Who Would Win?