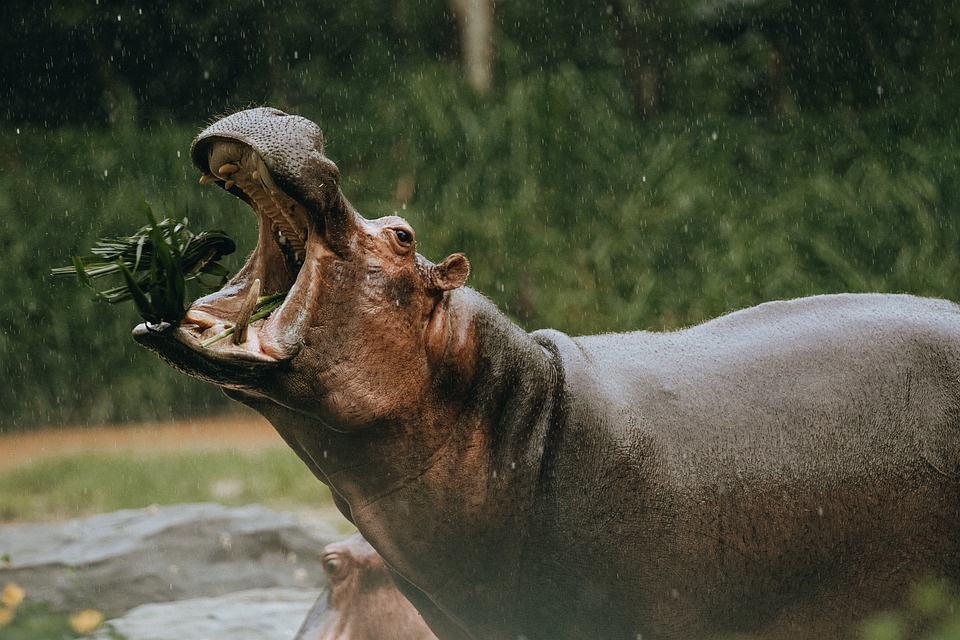 Do you know the hippopotamus is responsible for 500 human deaths in Africa every year?

Do you know that the hippopotamus is the most aggressive and deadly animal in the world?

As a result, they are considered the third-largest land animal on earth after Elephants and White Rhinoceros.

Hippos get angry for no reason at all…

Males tend to be more aggressive than females if they sense danger is nearby.

Have you seen a hippo eating watermelon before?

A Hippopotamus eating watermelon is like human eating berries.

Some may argue that honey badger is aggressive as well…

As a Matter of fact, a hippo would gladly rip a honey badger in half without any remorse whatsoever. How to survive the most aggressive animals

With a bite force of 1800psi, a mouth and jaw big enough to crush a boat, crocodile, or human head in half…!

Even though a hippopotamus is deadly and aggressive, humans have been able to tame them from birth.

Nowadays, hippos are found in captivity and they tend to live longer for up to 50 years.

Sadly, human encroachment, habitat loss, and hunting have made the hippo population decline in the wild… 6 Animals that can defeat a hippopotamus

Hippos live in herds (groups) of 10-20 individuals and this herd is controlled by a dominant male, the rest of the family are females, their young’s and non-breeding males.

Female hippos give birth once in two years, usually to a single calf.

I’ll include a video showing a man brushing a hippo’s teeth and mouth.

Well, when it comes to humans, anything is possible. The intelligence of man is far greater, superior, and unmatched.

Hippos can be found mostly in sub-Saharan Africa and these places include South Africa, Ethiopia, Kenya, etc.

In marshes and lakes, they frequently engage in combat with crocodiles. Hippos can be seen in big herds in Tanzania and Zambia but they are becoming scarce in the Republic of Congo and the Virunga National Park.

Do you know the Greeks named hippos “river horses” because of their love for water?

Hippos can spend 16 hours submerged in water throughout the day.

The Males are known to forcefully submerge female hippopotamuses in water, during mating. Hippos do occasionally breed on land, but this is extremely rare and they have a gestation span of 240 days.

They do this so they can keep their huge body cool.

They are good swimmers and can hold their breath for 5 mins underwater.

They have very thick skin, said to be around 2 inches thick, pride of the lion finds it difficult to take down an adult hippo. It is even said that the skin of a hippo is almost bulletproof.

Caution; If you ever see a hippo, *RUN*