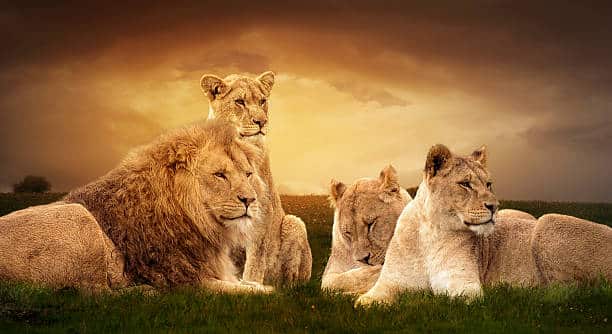 Lions are known for their impressive appearance and powerful roar, but beyond that, they are also fascinating animals with a unique social structure and hierarchy.

Lions live in groups known as pride, which consist of several females, their cubs, and one or more males.

The social structure of lion pride is complex and hierarchical, with a clear dominance hierarchy among the males and a distinct role for females and cubs.

In this article, we will take a closer look at the social structure and hierarchy of lion pride, and explore what makes these big cats so special.

A typical lion pride consists of several females, their cubs, and one or more males. The females in a pride are typically related to each other, while the males are typically unrelated.

The size of pride can vary widely, with some pride consisting of as few as two or three individuals, while others can have as many as 30 or more.

The Role of Females

Females play a crucial role in a lion pride, and they are responsible for hunting, caring for cubs, and defending territory.

Female lions are typically the primary hunters in pride, and they are known for their cooperative hunting strategies.

They will hunt together in groups, using their strength and speed to take down large prey such as wildebeest, zebras, and buffaloes.

Females are also responsible for caring for cubs, and they will nurse and raise their young together.

Lionesses will typically give birth to a litter of one to six cubs, and they will care for them for up to two years.

During this time, the cubs will learn important survival skills such as hunting and defending territory.

The Role of Males

Males play a different role in a lion pride, and their primary responsibilities include defending territory, providing food, and mating.

Male lions are typically larger and stronger than females, and they are better suited for defending territory and taking down large prey.

Males will also provide food for the females and cubs in their pride by bringing back large prey that they have killed.

However, it’s worth noting that male lions are not as efficient hunters as females and they tend to rely more on scavenging or taking overkill from other predators.

The dominant male in a lion pride is known as the “alpha lion,” and he is responsible for defending the pride’s territory and providing food.

The alpha lion is typically the largest and strongest male in the pride, and he will have a distinctive, dark mane that is thicker and more luxurious than that of the other males.

The alpha lion will have exclusive mating rights with the females in his pride, and he will typically father the majority of the cubs.

However, it’s worth noting that subordinate males within the pride may also mate with females secretly.

Subordinate males in a lion pride are typically smaller and weaker than the dominant male, and they will have lighter-colored manes.

They will typically not be able to mate with the females in the pride, but they may help to hunt and provide food for the pride.

However, it is worth noting that subordinate males may challenge the dominant male for leadership of pride.

These challenges can be violent and may result in injury or death. If a subordinate male is successful in overthrowing the dominant male, he will take his place as the leader of the pride.

Females and cubs in a lion pride have

a less prominent role in the social hierarchy. They typically follow the lead of the dominant male and will defer to him in matters of hunting and territory defense.

The cubs in pride will also be raised and cared for by all the females in the group.

Females and cubs are also protected by the dominant male and subordinate males in pride. The males will defend the pride’s territory and will fight off any potential threats to the females and cubs.

However, it’s worth noting that lionesses have been observed to lead the pride, or at least have a powerful influence on the pride’s behavior and decision-making.

This is particularly observed when the pride lacks a dominant male or when a new male tries to take over the pride.

Lion pride is a complex and hierarchical social structure, where each member has a distinct role to play.

The social structure of lion pride is essential for their survival in the wild, as it allows them to hunt, care for cubs, and defend territory more effectively.

The females, who are the primary hunters, and the males, who defend the territory and provide food, complement each other.

The dominance hierarchy within a pride is also crucial, as it ensures that the strongest and most capable individuals are in charge of leading and protecting the group.

However, it’s worth noting that the social structure of lion pride is not static, and it can change over time due to challenges, deaths, or births.

It is important to remember that while lion pride has a clear hierarchy, all members of the pride work together to ensure the survival and success of the group.

Understanding the social structure and hierarchy of lion pride can help us appreciate and respect these big cats even more.

By protecting and conserving lions and their habitats, we can ensure that future generations will have the opportunity to see and understand these fascinating animals.

It is also important to note that lion pride, and their social structure, are unique to the African lion subspecies. Asian lions, which are found in the Gir Forest of India, live in much smaller groups, called “coalitions,” which consist of 2-3 related males and a few females.

The males in these coalitions also have a dominant hierarchy, and they will compete with each other for mating rights with the females in the group.

It is also worth mentioning that lion pride is not only found in the wild, but also in captivity.

In zoos and wildlife parks, lion pride is often created for breeding and conservation purposes.

However, this pride is not natural and its social structure may differ from wild lion pride.

In conclusion, the social structure and hierarchy of lion pride are crucial aspects of their behavior and survival in the wild.

Understanding this social structure can help us to better appreciate and understand these magnificent animals.

It is important to continue to support conservation efforts to protect lions and their habitats, so that future generations can continue to learn about and enjoy these amazing animals.

I. Introduction
A. Hook: Start with an interesting fact or statistic about lion pride to grab the reader’s attention
B. Thesis statement: Introduce the topic of the social structure and hierarchy of lion pride and what the reader can expect to learn from the blog post

IV. Conclusion
A. Summarize the main points of the blog post

The ultimate showdown: A hypothetical fight between the giant otter and honey badger

The Physical Characteristics and Behavior of Lions in the Wild