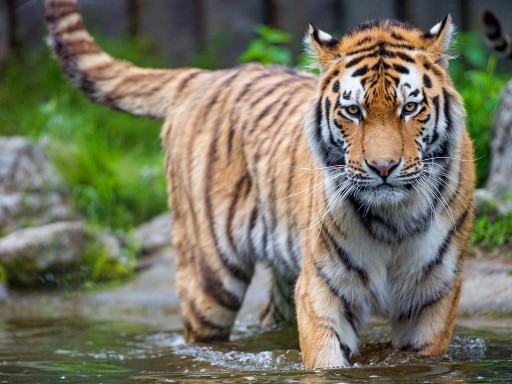 Top reasons why Tigers are so ferocious, dangerous, and deadly,

Why are tigers so dangerous?

Because that is what they were made to be.

The tiger represents the true embodiment of a magnificent but downright dangerous wild animal, even bringing this quality to a whole new level.

It has evolved to become the world’s biggest cat, the symbol of courage, the true meaning of power, the ultimate apex predator, the terror of the jungle, feared by all, unsurpassed and unstoppable even in a world dominated by humans.

Sure enough, the tiger is the true king of the Jungle, and not the lion (especially considering that lions don’t actually live in forests, let alone tropical rainforests). Lions or Tiger which is better at hunting prey

Nothing, absolutely nothing, can put a stand against the striped king of Asia – crocodiles, bears, buffaloes, gaur (the largest living wild cattle), and wolf packs can be vulnerable to frequent attacks; even baby elephants and rhinos can cower and run for their lives at the mere sight of a tiger, and even man must be careful. Top reasons why Tigers are so ferocious, dangerous, and deadly..Watch as Grizzly bears defeat Tiger in a fight

This supreme predator sits at the top of the food chain, and it is truly built for the kill, which easily explains why the tiger is among the most feared of the world’s carnivores:

Can a Tiger beat a Jaguar?

As you can see here, the size difference between a tiger and a jaguar is quite big. Even sub-adult tigers are bigger than jaguars, so to answer your question…. it has already happened before, and guess who won.

Vertical black stripes on its orange body allow it to blend seamlessly in the dense foliage, thus making the cat invisible to an unsuspecting quarry, even in broad daylight.

Extreme intelligence – the cat has the biggest brain of all carnivores, making it the most intelligent of all felines as well as the most cunning.

Even a usually friendly tiger will not forsake its hunting instincts and therefore may become a bloodthirsty killer at any time.

As such, most tigers, both wild and captive, have over the years claimed the lives of at least 373,000 people; and sadly, more and more attacks occur nowadays. 10 Animals that will Kill a full-grown tiger

Because of all those things I mentioned, it’s easy to see why tigers are – and remain to this day – so dangerous, perhaps the most dangerous of all big cats as well as all living beasts.