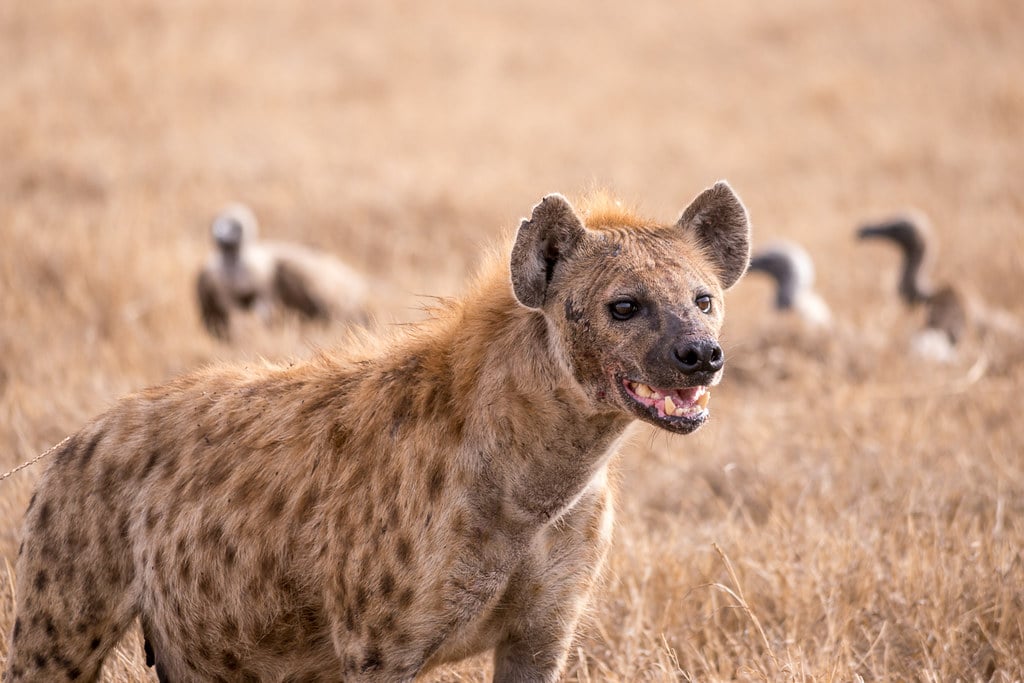 In a fight between a Kangal and a spotted hyena, who would win?

The Spotted Hyena, one of Africa’s top apex predators comes face to face with the Turkish Kangal, one of the most ferocious livestock guardian dog breeds.

Let’s see what both of them have to offer in a fight.

I will compare a Male Turkish Kangal with a female Spotted Hyena as both are more powerful and larger than their female and male counterparts.

Size and Description of TURKISH KANGAL

The Kangal dog is large, strong, and inbuilt with muscle.

The neck is broad and powerful, with a small dewlap.

The dog’s redundant skin gives it an advantage in battle by preventing it from being immobilized.

They have a well-muscled back but are not overly broad, sloping down to the croup and tail’s base and it’s normally held in a curl and hung low.

Size and Description of SPOTTED HYENA

Spotted females are 10% heavier than males, unlike other species.

The coat of the spotted hyena is sandy, grey, or yellowish in color. Its body is covered in dark brown or black markings.

The spotted Hyena is strongly built, with a massive neck and large head topped by rounded ears, unlike the other hyaenas.

The jaws are probably the strongest in relation to the size of any mammal.

Hyenas’ front legs are longer than their hind legs, resulting in an oddly shaped back that slopes downward. 5 Dog breed that can kill a wolf

Distribution and Habitat of Kangal Dog

The Kangal Dog is an old flock-guarding breed, according to the Turkish people, and is assumed to be connected to the early mastiff-type canines shown in Assyrian art.

The breed is called after the Kangal District in Sivas Province, Turkey, where it is thought to have originated.

Considering its regional origins, the Kangal Dog is regarded as Turkey’s national dog by many Turks.

The first Kangal dogs were brought to the United States by the Nelsons in 1985.

The basis for the Kangal Dog in the United States was set and later imported.

Distribution and Habitat of Spotted Hyena

Spotted Hyena live in Africa south of the Sahara Desert.

They may live in savannas, wetlands, semi-arid places, and even highland forest habitats.

Adult spotted hyenas sleep in holes or shallow ponds, under bushes or scrubs, or anyplace else they may find shade during the day, rather than in dens.

Watering holes are used by hyenas to cool off or hide additional food.

Spotted hyenas can be active at any time of day or night, depending on their needs and whether or not humans are present, although they are most active at night.

In 1985, the Nelsons brought their first Kangal Dog to the United States.

As a result, you should choose high-quality kibble and occasionally add raw meat.

A Kangal of either gender needs 3000 calories per day to enjoy a healthy, happy, and active lifestyle.

For simplicity and ease of care the majority of these dogs are fed with high-quality kibble; specially formulated for large-breed and active dogs.

In overlapping territory, lions and hyenas compete for the same food.

Hyenas will sometimes organize, pursue, and kill prey only to have it stolen by lions.

Hyenas are frequently injured or killed by lions while fighting over a carcass.

The hyena tribe grows in size, and so does its prey. Young rhinos, adult wildebeest, zebras, and Cape buffalo are all examples of this.

The hyenas work in a group called a clan when hunting such large prey, and young hyenas take years to become successful.

Gazelles, impalas, warthogs, and waterbucks are pursued by smaller packs. A spotted hyena may pursue smaller prey when foraging alone.

The behavior of Kangal Dog

In that he is more people-oriented, the Kangal Dog is not your average livestock guarding dog.

He’s still vigilant and protective of his family and property.

He will form a strong attachment with his human family, which makes rehoming an adult Kangal Dog difficult.

He is normally great with kids, but he might get defensive around non-family members.

The importance of early socialization and training cannot be overstated. To guarantee that he grows into a well-adjusted member of the family.

He is so territorial that if he is not contained within a tight fence, he will attack.

When it comes to other domesticated animals and people, he can be quite hostile.

The Kangal Dog does require continual training, It’s better if he incorporates his training into his workout routine.

The behavior of Spotted hyenas

When it comes to social intelligence, Spotted hyenas are thought to be on the same evolutionary level as some monkeys.

Because they are largely nocturnal, they have superb night vision.

At night, they hunt, while during the day, they sleep or stay near their den.

Clans are a matriarchal social structure made up of related individuals.

One alpha female leads the group.

Spotted hyenas have a wide vocal range and use whoops, shouts, and other sounds to communicate with clan members. They snort, growl, and guffaw.

Their second name comes from the sound of their giggling, which sounds like frantic laughter.

So, in a fight between a Kangal and a spotted hyena, who would win?

Even if their dimensions are close, the Spotted Hyena is actually more powerful than any canine, including the Turkish Kangal.

They’re also tougher, as Spotted Hyenas have been known to survive lion bites to the neck.

Spotted Hyenas, on the other hand, are superior fighters and killers.

The Kangal has gained a foothold in Africa, where farmers suffer losses because of predation by lions and other big cats.

However, these farmers have seen tremendous success in using a Kangal dog to fight off fearsome predators.

But they deter the animals and almost never actually engage in a fight, so mostly they use intimidation.

Spotted Hyenas are born killers. if the Hyena gets in one bite on the dog’s neck, it’s over.

Then it can withstand a suffocating bite from a Turkish Kangal.

However, the dog is unlikely to use such a strategy and will instead try to fight it out.

While the more powerful Spotted Hyena goes for the kill right from the start.

So to sum it up, the Kangal will lose the fight because of its lack of fighting experience, and its bite will not do much to the Hyena as it

Because the Hyena just needs to bite the dog once in the neck to finish the fight promptly and it has coped with considerably more powerful bites.

The dog will have a crushed jugular from the sheer bone-crushing pressure of such powerful hyena jaws.