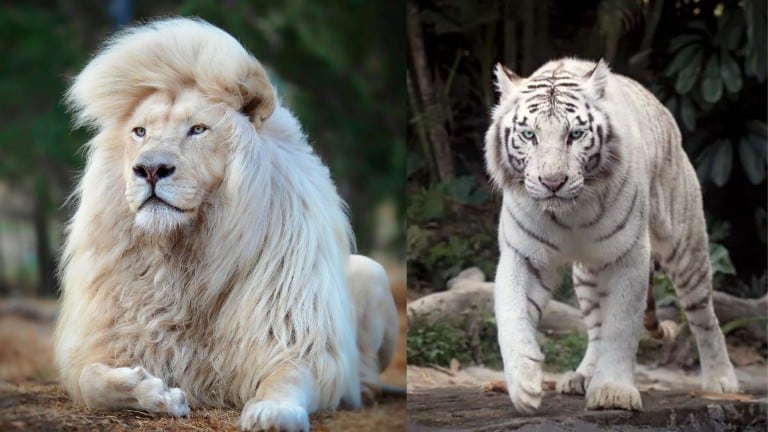 Why are some lions and tigers white?

As you have probably seen on the internet or on TV, there are some tigers or lions that are white.

We’re not trying to lure you with false facts or stories about big cats who’ve just had their hair bleached.

The promotion of “endangered” white tigers or lions, on the other hand, is a ploy used by those trying to seek to profit from these captive cats while providing no benefit to wild animal conservation.

White lions, for example, are part of the general classification of lions, Panthera Leon.

They are not albinos; they lack tawny coloration due to a rare condition that results in reduced pigmentation.

Because of their majestic appearance, they have been revered as sacred beings by tribes in southern Africa, but have also been hunted to extinction in the wild.

How are white big cats created?

Some people claim that white tigers are a special subspecies of tigers that are endangered and dangerously close to extinction.

Moreover, most, if not all, of the white tigers alive today were purposefully bred by zoos and private collectors.

Bengal tigers with two copies of a very rare recessive gene that controls coat color are known as white tigers.

Specifically, researchers have discovered that white tigers are caused by a single gene mutation in the protein known as SLC45A2.

The white lion is a rare color mutation of the lion, specifically the Southern African lion.

White lions in the area of Timbavati are thought to have been indigenous to the Timbavati region of South Africa for centuries, although the earliest recorded sighting in this region was in 1938.

Regarded as divine by some African cultures, white lions first became known to the English-speaking world in 1977 through the book The White Lions of Timbavati.

Why do white big cats have health issues?

Captive-born white tigers that survive have numerous life-altering complications as a result of inbreeding, in addition to the white gene mutation.

Because so many of these tigers are cross-eyed in one or both eyes, they have difficulty processing visual stimulation, problems with how their brains control their eyes, and difficulty understanding spatial relationships when they are young.

Mohan was a white tiger that we rescued in 2005 from a roadside zoo. He was severely cross-eyed, and his daughters inherited those bad genetics.

Gracie is 95% blind and Thor is cross-eyed.

Such breeding involves inbreeding and can result in inbreeding depression, genetic defects, reduced fertility, and physical defects, although this has not yet been found to cause hind-limb paralysis or serious heart defects, which would indicate a severe level of inbreeding.

For white tigers to currently exist in such numbers in captivity, they have been repeatedly inbred, and we all know what that means.

“Due to their uniqueness they are often selectively bred, which can lead to health problems.

Health problems may be more frequently encountered due to inbreeding which is typically required to maintain the white characteristic.

The ZAA goes on to say that because of their lack of skin pigmentation, white tigers in the southern hemisphere are more vulnerable to UV-related skin conditions, including cancer.

The British and Irish Association of Zoos and Aquariums (BIAZA)

The British and Irish Association of Zoos and Aquariums (BIAZA) has also denounced the purposeful breeding of white tigers, declaring in a position statement that “the delivery of thoughtful, educational messages about the unfortunate results of inbreeding” must be included in any public display was a member facility comes to hold and care for such animals.

The US Association of Zoos & Aquariums (AZA)

The US Association of Zoos & Aquariums (AZA) officially prohibited member zoos from breeding white tigers in 2011.

There must be a good reason why so many major zoo associations do not want their members to participate.

Why, then, do institutions continue to maintain a population of these white anomalies, which can have serious consequences for health and therefore welfare?

And when you engage that level of desire for an animal then ultimately you must be able to get people to part with their money, right?

And this money can go towards conservation and further education.

Most, if not all, tiger conservation organizations actively discourage white tigers and lion breeding.

They are of mixed race. They have genetically deteriorated.

Their lack of genetic diversity has no conservation status, and they cannot be used in captive breeding or reintroduction programs.

So even if an institution just purchases white tigers instead of actually breeding them, they have still fuelled the breeding enterprise.

Many white tigers are bred that are unsuitable for trade and must be euthanized, born with deformities.

it is reported that as many as 30 to 60 cats may be destroyed in order to get one perfect-looking, profitable cub.

White tigers can occur naturally in the wild, and there are reports that a few were seen in the tropical forests and jungles of India and Southeast Asia in the early 20th century.

The last known wild white tiger was shot in 1958.

White lions are indigenous to the Greater Timbavati region of southern Africa and are currently protected in South Africa’s Central Kruger Park.

White lions were reintroduced into the wild in 2004 after being hunted to extinction in the wild.

The first white cubs were born in the Timbavati region and surrounding nature preserves in 2006, following a ban on trophy hunting in the region.

In 2014, white lion cubs were born for the first time in Kruger Park.

Wolverine vs Tasmanian Devil fights to the death