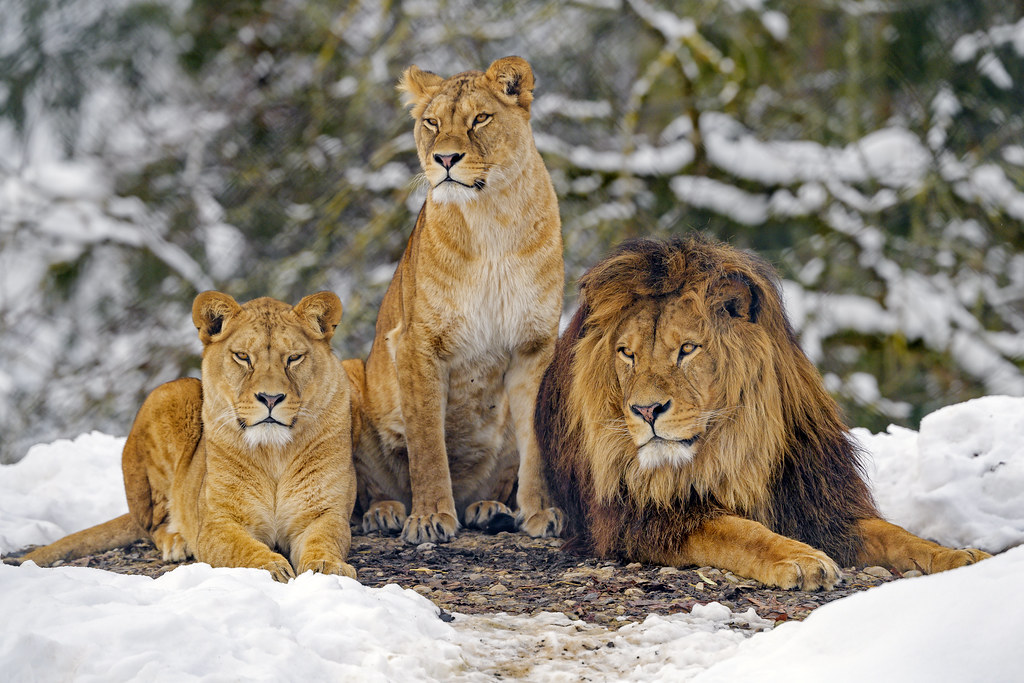 Lions are fierce and majestic but also misunderstood. Despite the fact that they’ve somehow become known as ” The King of the Jungle,” they don’t even live in the jungle, but rather in the grasslands and savannah.

Lions are aggressive and ferocious, they roar and growl, and they symbolize strength and courage in many cultures.

Regarded as the “king of the beast”, the lion is the most well-known of all wild animals for ages.

With such a great reputation, we’re curious to see how powerful it really is in numbers and whether it can live up to it.

How strong are lions?

Lions are the true lords of their domain, and they fear no other creatures due to their overwhelming strength and might. Hyenas are lions’ only true adversaries.

Hyenas, on the other hand, frequently attack and kill Cubs while avoiding fights with adult lions.

That’s not surprising given that a single mature male lion has the strength of 20 hyenas combined.

A single lion is one of the strongest animals on the planet, but the pride is where lions’ true power lies.

Lions are the only social big cats species, and they work together, even the largest animals like crocodiles and giraffes become their prey.

Even though lions relax for an impressive 18-20 hours a day, they have large strong muscles.

This seems surprising, given that humans quickly weaken if we lie down 75% of the time.

The reason for this is that lions are born with far stronger muscles than humans, which are kept in shape by the active aspects of their lifestyle.

Lion is extremely active for a short period of time during which they do not sleep and relax.

Male lions patrol up to 20 kilometers to keep other animals at bay, and they roar to mark their territory.

Their powerful bodies require a lot of energy, so finding and eating the largest prey available is the most efficient way to meet their daily energy needs.

Hunting large animals requires a highly energetic “workout”, from identifying and chasing prey to the sprint, struggling, and killing.

Another of male lions’ most important tasks is to fight other males and chase them off their territory. The fight also contributes to keeping the animals in good condition.

Our human bodies, on the other hand, have adapted to a totally different lifestyle than lions.

The bite force of a lion is determined by its age and size. A lion’s bite can only produce roughly 650 psi, according to popular opinion.

As a lion develops in size, its bite will be able to provide a more forceful impact. Despite the fact that males are larger than females, females are the primary hunters in this species.

Males have a more powerful bite and will join the hunt for huge animals such as elephants.

When compared to bears, gorillas, or crocodiles, the lion’s bite force is significantly less powerful.

To be able to kill and consume the animals they seize, lions need to have strong jaws.

Female lions do the majority of the hunting, and will only hunt if needed.

Lions must be able to tear through thick skin and hides to dine on a range of animals in Africa.

For an easy kill, lionesses attack an animal’s throat and other sensitive regions of the body.

The prey they pursue is not only enormous, but they also have exceptionally thick skin and hide that can be difficult to penetrate.

One of a lion’s most significant qualities for feeding is its teeth.

Even with such a powerful bite, they require the assistance of canines and incisors to shred through tissue.

A lion’s teeth are divided into three categories: incisors, canines, and carnassial teeth. Their teeth are designed for devouring and shredding meat as carnivores.

How strong is a lion swipe?

A lion swipe is powerful enough to easily kill large creatures. The lions’ powerful forelimbs are braced by muscles at the shoulder, and their strike is similar to that of a hammer.

Before the lion swipes and strikes an animal it stretches out its claws that can rip off animal skins, as we would strip the peel from a mandarin.

A lion delivers up to 400pounds (180kilograms) of force with a swipe of its paw.