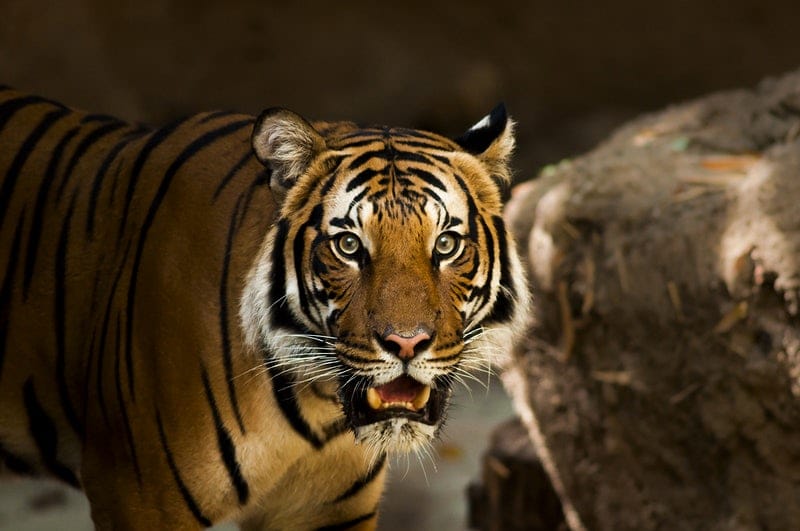 Animal strength had always been an interesting topic to discuss.

Although an animal’s strength is solely determined by its size, a great percentage of wildlife boasts strength far exceeding that of humans. The Siberian tiger is the largest and most powerful of the species.

Males can grow up to 12feet (3.6meters), measuring from the nose to the tip of the tail.

They are as heavy as six normal adults, weighing 660 pounds (300 kg) of practically pure muscle.

How strong are tigers?

For many people, tigers are one of the most beautiful animals, Yet, it’s ferociousness and power make them even more fascinating creatures.

Tigers are highly strong and are regarded as one of the most dangerous predators in the world because they are the biggest cat species. The power of the tiger is great. Tigers are among the most powerful creatures on the planet.

How strong are the tiger’s legs?

Tigers are not only the largest big cats, but they are also the strongest. Few creatures can equal the strength of a tiger, which has a biting force of 1,050 PSI and devastating attacks from their massive paws.

Apex predators, or those at the top of the food chain, are tigers. With no natural predators, they are the ultimate masters of their environments.

Knowing that tigers will go after bears when food is short demonstrates the strength of tigers.
Tigers are adept climbers in addition to being agile land predators.

Tigers, unlike other big cats, are excellent swimmers. Their webbed feet and powerful bodies allow them to live a semi-aquatic lifestyle perfectly.

How strong are the tigers teeth?

The teeth and the structure of the jaw of the tiger both play a very important role in its hunting, diet, and general way of life.

These are built for grabbing moving prey, sometimes bigger than the hunting tiger itself,

Tigers’ teeth are capable of crushing the neck of prey, bone and tendons are crunched, and meat is ground into mouthfuls tender enough to swallow. As a result, the jaw must be incredibly strong, flexible, and forceful.

How strong are the tigers jaws?

The jaw holds 30 teeth in a normal, healthy animal. These teeth are custom built for grinding and tearing flesh.

The molars and premolars, like those in humans, are intended for grinding and chewing.
So, once the tiger has caught its meal and torn it apart, it may process the large portions of meat between its teeth before ingesting it.

Between the molars and the canines, there are a substantial number of teeth missing, allowing the animal to hang on to its prey even when it is struggling to flee.

Also has an incredible bite force of 1050 per square inch, nearly double that of the king of the jungle.

How strong are the paws of a tiger?

The tiger’s legs are one of its strongest assets.

Their legs’ bones are strong and solid, allowing them to support their big and powerful bodies when hunting large prey.

What makes tigers so Strong?

Is it because of their stature, speed, agility, genetics? or a combination of all of the above?

All of these characteristics combine to make tigers incredibly powerful creatures.

Tigers are born with the ability to be masters of their surroundings.

Their bodies remain muscular and robust as long as they meet their dietary requirements.

Also, let us not forget that tigers fight bears, guars, and other gigantic animals almost regularly.

So, in addition to having amazing genes, tigers fight for their lives every day, which develops them over and over. The tiger is stronger than any other animal of comparable size.

The tiger is one of the most dangerous and lethal animals on earth. It is large, swift, and powerful.

There are records of tigers dragging and carrying large kills over great distances.

for example, One tiger was reported to have carried a full-grown horse for 1640 feet (500m). Another tiger carried an adult heifer up to a 12-foot high embankment (3.65m).

Another example of tiger strength is its swimming ability.

There are records of tigers periodically visiting islands in the Sunda Straight despite the strong tidal current of about 4km/h. The islands are about 4km from the mainland.

As for climbing ability, tigers have been observed to climb smooth bark trees to a height of 33feet (10meters).

Tigers also faced a lot of challenges, making their bodies adapt to being bulky and strong to be able to survive.

So basically, the more food they get, the more muscles they gain. They walk about 25 miles (40km) in a day regularly in their territory.

Tigers’ hunting skills are razor-sharp, and they can hunt at any time of day, hence they are territorially hostile. That can be explained by genetics.

Their bodies need that muscle power, so their genetics says to give them that much as long as they have the nutrients for it.

Even if they sleep all day, their bodies will retain their muscles as long as they eat enough protein to maintain it. It’s basically their foundational musculature.

Great white shark vs pacific Giant octopus – who would win a Fight?

How did cats become domesticated?