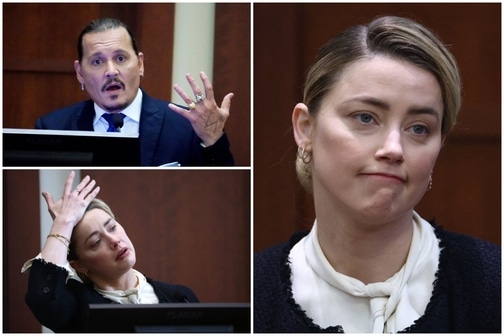 Why do you think Johnny Depp married Amber since she was so Awful and much younger?

I have some opinions on this…!

It could be that Amber Heard was the most amazing person Johnny Depp ever met. She was brilliant, loving, sexy, smart, funny, etc… she moved mountains to be everything Johnny Depp could possibly want in life. Plus she looked like this back then.

Another reason could be that Johnny had a mid-life crisis and saw Amber.

He neglected all the red flags and gave her personality qualities she didn’t deserve.

She was indeed young and beautiful at the time they met and Johnny was going through something when he laid eyes on her. They are very different people and have different tastes.

Johnny had met someone like Amber Heard. His mother was a narcissist and that’s why Johnny fell for a covert narcissist like Amber.

It’s sadly not surprising. A lot of formerly abused kids grow up and are attracted to people who act like their abusers. Sadly, that behavior has become normalized that they subconsciously want to recreate it because it’s familiar

There’s an old saying “We become one of our parents and marry the other.”

Once she realized her career not benefiting from her marriage and she was not going to get much in a settlement etc… she decided to move on and take Johnny out because she worked hard and wanted payback.

That’s why she takes pictures of everything and they constantly fight. She planned everything from really early in the relationship. Plan A to Z and what to do for every scenario. Johnny was blindsided and never met a predator like her. He lost before it began….

Who do you think is the victim – Amber Heard or Johnny Depp?

Johnny Depp has had several relationships and marriages with women, all of whom have stated on the record that there was never any hint of violence within their relationships.

Amber Heard has also had several relationships with women, all of whom have stated on the record that Amber physically and mentally abused them.

During the trial, which I have been watching the live feed from court every day, everyone testifying has said the same thing, no evidence of abuse from Johnny, or mental and physical abuse from Amber.

The only “evidence” offered so far showing proof of Johnny abusing Amber has come out of Ambers’s mouth.

Johnny had genuine warmth towards everyone on the witness stand so far. He looked at them, smiled when they were testifying, and was respectful towards the jury. Amber has had the exact same expression of disdain on her face the entire time.

She hasn’t once looked at any witness, instead focused on the judge, her lawyer, or her notes. She hasn’t looked at the jury, because that jury is obviously beneath her, and doesn’t deserve her gaze.

Based on what I’ve seen so far – Amber is guilty

I know the trial isn’t yet over, and I’ve therefore not yet seen all the witness testimony and evidence, but based on what I’ve seen so far, Amber is 100% guilty of lying and making defamatory comments against Johnny, leading to him losing movie roles and the subsequent millions of dollars in revenue.

On the other hand, Amber may be doing something good — specifically drawing attention that women are just as capable of being abusers in relationships.

Equal treatment for all!

So why does Johnny Depp get so proactive in defending himself?

Nor should fear of reprisals or legal consequences hold him, or anyone else, back when it comes to pursuing justice and finding the truth. By all means, Depp, leave no stone untouched.

He stands up for himself, legally, in papers, and in the media, because enough is enough. No one should ever be able to abuse other human beings with impunity, regardless of gender, sexuality, or ethnic background.

Meet Richard Dawkins – The man who dares to curse God