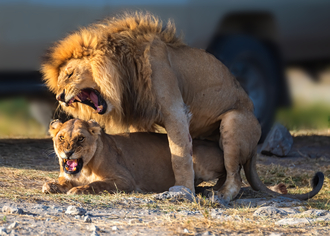 Lions have captivated our hearts for decades as cinematic heroes and fictional creatures.

“The Lion King” won us over and increased our affection for Lions.

Lions are at the top of the food chain, the Swahili word for lion “Simba” also means Strong, king, and aggressive. If you call someone lion-hearted you’re describing a courageous and brave person.

When you lionize someone, you show considerable interest in them and have great regard for them. 5 Animals that can defeat a lion

prime habitat for lions is open woodlands thick grassland and brush habitats where there is enough cover for hunting and denning.

These grassy habitats also supply food for the animals that lions hunt.

Pride can have three to thirty lions and is made up of lionesses, mothers, sisters and cousins, and their cubs along with a few unrelated adult males.

The pride has a strong tie with each other and is unlikely to accept a stranger.

The unrelated males only stay for a few months or years, but the older lionesses stay together for the rest of their lives in locations where there is less food.

Pride is smaller with two lionesses in charge.

Inhabitants with more food and water, pride can have four to six adult lionesses. Both males and females add scents to marks or define their territory.

Living in pride makes life easier while hunting as a group and this means there is a better chance that the lions have food when they need it and there’s a great chance they won’t get injured while hunting. Why is Lion king of the savannah?

Lions researchers have noticed that some activities are contagious within a pride if one lion yawns, grooms itself, or roars, it sets off a wave of yawning, grooming, or roaring.

Lions and lionesses play different roles in the life of the pride, the lionesses work together to hunt and help rear the cubs, this allows them to get the most from their hard work.

Keeping them healthier and safer being smaller and lighter than males.

Lionesses are more agile and faster, while it may look like the lionesses do all the work in the pride the males play an important role as well.

Males patrol, mark and guard the pride’s territory, males also, guard the cubs while the lionesses are hunting and they make sure the cubs get enough food.

If a lone male lion wants to join a pride, he has to fight with the dominant male in that pride, the winner takes over the pride. Why are lions so strong?

If the new male wins, he’ll take over the pride and establish his dominance by killing off the cubs of the previous dominant male. It’s a cruel world folk.

5 Animals That Could Defeat An Elephant

SPIDER VS SCORPION – Who is the king of the Arachnids?